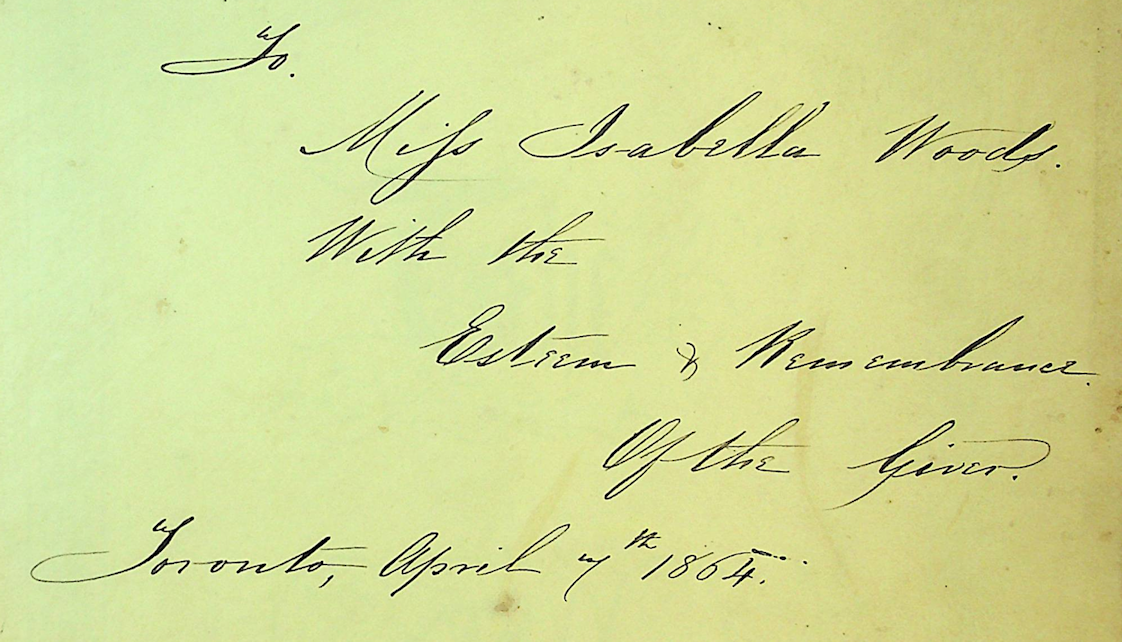 With the Esteem & Remembrance of the Giver

The autograph book of Mrs Isabella Woods opens with the above inscription, and is followed by a number of original poems, messages and well-wishes from others, in the traditional usage of autograph books. Usually exchanged amongst friends, family and acquaintances, autograph books were the predecessor of the modern scholastic yearbook.

What is unique about Isabella’s book is that there are repeated messages written in the same handwriting, unsigned and undated. Considering the number of additions in this hand, the fact they are unsigned, and the content of these notes, it would appear that these are the products of Isabella herself.

Although written without attribution, everything written by Isabella can be identified as a popular poem or song at the time, indicating that she was using her autograph book not only for momentos from loved ones, but as a keepsake album of material that spoke to her.

The first of these, as pictured below, is a poem by Thomas Hervey Kibble, entitled ‘I think of thee in the night.’ Although it does not appear to have had much longevity in terms of popularity, as it is not widely known or easily found online, it does appear in some contemporary publications, such as volume 13 of Graham’s Illustrated Magazine of Literature, Romance, Art, and Fashion (1856-1858,) and volume 1 of A Victorian Anthology, 1837-1895: Selections Illustrating the Editor’s Critical Review of British Poetry in the Reign of Victoria (1895.)

At some stage, the poem was set to music. It’s not clear to me if this was done by Kibble himself, or by subsequent artists, but it can be found in Complete Songs for Solo Voice and Piano where the musical arrangement is attributed to the author. The most famous arrangement, and the one most readily available online, is that of Muriel Hebert, which can be found on Spotify, and, for the music lovers, can be purchased as sheet music.

I think of thee in the night

When all beside is still

And the moon comes out with her pale sad light

To sit on the lonely hill

And there comes a voice from the far off shivers

I think on thee by day

‘Mid the cold and busy crowd

When the laughter of the young and gay

Is far too glad and loud!

I hear thy soft sad line

And thy young sweet smile I see;

But for its dreams of thee

The most interesting aspect of Isabella’s transcription is that it contains two deviations from the original poem. In the first stanza, in the seventh line, she has the phrase ‘far off shivers,’ that in every version of the song to be found is usually ‘far off streams.’ Indeed, ‘streams’ metrically makes more sense as it rhymes with the previous ‘dreams.’ Then again, in the second stanza line five she has replaced ‘soft sad tone’ with ‘soft sad line,’ once again going against the rhyming scheme.

There is no way to know for certain why Isabella’s version of the poem deviates in these two places. It’s possible that she was being innovatory, introducing words she felt suited the poem better. It’s possible they are simple mistakes, perhaps from distractedly copying the material. But, a likely scenario is that Isabella had only ever encountered the poem orally – either through song, or through recitations by friends and family – and that she had either misheard the words herself, or only ever been introduced to a version that had been changed.

Songs and poems that travel primarily by word-of-mouth are often altered in transmission. ‘Ring around the rosies’ can end either with ‘atishoo, atishoo’ or ‘ashes, ashes’ depending on where you grew up. The ‘itsy bitsy’ spider is known to many children as ‘incy wincy.’ It isn’t unreasonable to suggest that this too, may be the explanation by Isabella’s innovations.

Regardless of the origins of these variants, Isabella has clearly transcribed this poem because it held some importance to her, as did the other poems, both original and famous, that we’ll see in weeks to come.