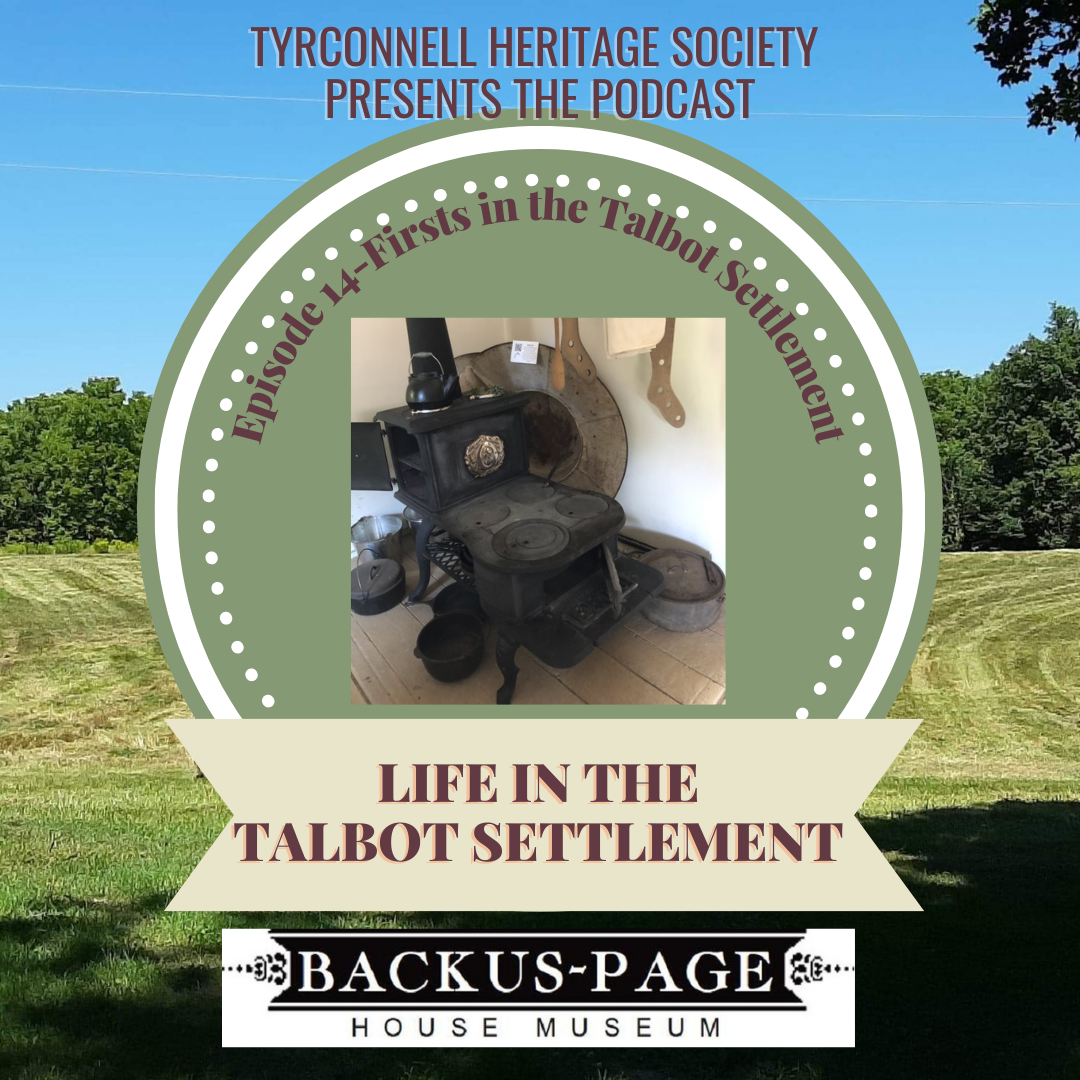 Let’s jump on into this episode and start with the first of schools. The first school ever opened in the County of Elgin was in Malahide in 1816. Up to the year 1830, only 20 schools existed in the whole Talbot Settlement extending at that time from the east of Elgin to the west of Kent, nearly 100 miles. The first school in the Township of Aldborough was held by Malcolm Robinson in 1818 near New Glasgow. In the year 1819, Mr. Thomas McColl taught at Brock’s Creek, on Talbot Road. The attendance fee for schooling was two and a half bushels of wheat per pupil and supplies (spelling books) cost 1 bushel of wheat. Before the construction of the school in Aldborough, students would have to travel across the Thames River to access the closest school. There were no bridges built across the Thames River until 1908. Meaning the children shuttled themselves across with little wooden rafts. Not only were schoolhouses used for teaching but were also used for a variety of different gatherings. People of faith met in houses, barns, and schoolhouses until they were able to erect a building suitable for their congregation. The first church was built in 1826 on Talbot Road west of New Glasgow, by the Presbyterians. Shortly after, the first church in Dunwich township, St. Peters was built by the Anglicans. In 1844, the Calvinistic Baptists built near Brock’s Creek. Between 1860 and 1865, four more churches were erected within a 3-mile radius. The Disciples built in Eagle and the Methodists on William Clark’s farm on Mill Street. Evangelicals and Lutherans built on the corner of Kerr Road and Middle Street. In 1870, the Catholics built within half a mile of the two latter churches. This town of many churches is known as Churchville, now a vanished town of Aldborough. Keep an eye out for future episodes, as we will soon dive deeper into the vanished villages of Dunwich and Aldborough! In the beginning of the settlement Col. Talbot was the only authorized person to join two people in holy matrimony. He used the Episcopal ceremony and performed it in his house in a very serious manner. People came to him from as far as Howard to be wed. This puts into perspective just how large and underdeveloped the settlement was at the time. Unfortunately, death was no uncommon occurrence in the early years of the settlement. In order to put bodies to rest, the community would fell a large basswood tree, saw off the desired length and cut it in half. The inside of both halves would be hollowed out and therein placed the body. The halves were fastened together with wooden pins and entombed. This is how the first caskets were constructed. Alex McPhail acted as the first undertaker and cabinet maker. Killfinlay Cemetery in New Glasgow was the first cemetery in the settlement. The first burial at this cemetery was in 1818 after Dugald McLarty and James Ruthven were drowned as they attempted to land at what is now Port Glasgow.

Of course, we can’t go about this episode without the brief mention of the first settlers of the area. The very first settler was James Flemming. He was appointed by the first Lieutenant Governor of Ontario, Lord Simcoe in 1804. Flemming lived on Lot 6, 1st Concession near what’s known as Flemming’s School on Black’s Line. Flemming was the only settler until 1816, when Capt. Arch Gillies was located on Lot 1, Talbot Road. In spring 1817, 15 Highland families from Caledonia arrived. By Autumn of 1817, three families from Argyleshire came over. In 1818, 36 more families came from Argyleshire and landed at Cnoc Neilliadh, New Glasgow after about a three-month journey. As time progressed, so did the settlement and talk over seas of a new land arose, bringing many more groups of settlers. However, for the next 15 or 20 years few immigrants arrived, the population being about 650. Between 1846 and 1855 the first German settlers came and bought land from previous settlers or lands owned by the Crown, or Gen. Airey, Col. Talbot’s nephew. Despite the Highlanders making up most of the population, many more cultures were welcomed with open arms.

Let’s look into some of the first innovations of the Talbot Settlement. In the year 1822, settlers finally began to build houses. Before this they lived in little huts made of wood felled from their land. The first frame building was built on the farm now owned by Robert A. Kerr. The settlement being along Lake Erie meant clay was of abundance. The first house made of brick was built in 1849, by Archibald Thompson. The brick was manufactured by Wendeline Schneckenberer. There were no mills in 1819 within many miles. Though with great innovation, by the end of the year that problem was solved and almost every house in the settlement had a personal mill. The creation of the hand mill was the joint production of the sheriff’s father, Peter McKellar and John Menzie. In 1820, Peter McKellar, who had no apprenticeship of any trade, erected a full-sized mill while the settlers aided in making a dam and raceway. This put the small hand mills to rest.

Another exciting revolutionary item was the first cookstove of the settlement. During the latter part of 1829 or early 1830, the first modern household appliance in the Talbot Settlement appeared. This appliance was a cookstove put into service in the home of Iron Ladd, near Tyrconnell. People travelled from miles around to witness the foreign stove in all its cast iron greatness. At the same time, Jim Young kept the first hotel on the Back Street of Tyrconnell. Which is rather convenient for the travelling settlers as it was able to hold all the people coming far and wide to see the great revolutionary appliance. Another very important business in the area of Tyrconnell was the Tyrconnell Cheese Factory. Established in 1865 by John Pearce, the factory was built on his own farm and was the first cheese factory in the district. At that time, cheese boxes were not available in all of Elgin County, so Mr. Pearce and his men had to make the long and slow journey to Ingersoll and back in order to obtain them. Later, the factory was moved into the more central location of Wallacetown in a larger two-story building at the corner of Pearce St. and Talbot St. Speaking of businesses… in 1828, there were only four stores in the whole settlement. One near what is now St. Thomas, and one in the townships Aldborough, Orford, and Howard. None in the other eleven townships making up the settlement. Early pioneer buying and selling consisted solely of bartering. So much so, that the money circulated in all the settlement would not amount to over $100 per annum. In 1831, cash was paid for the first time to buy wheat!!! The very first taxes were collected in 1819. Mounting to 25 cents on fifty acres and 50 cents on 100 acres. Prior to this date wooded land was not taxed.  In 1830, the first cargo was shipped out of the settlement to Montreal. The cargo sent consisted of wheat, pork, deer skins, raccoon skins, and flax seed.

Lastly, to end off this episode I thought we’d end off on a rather bizarre note. The very first fair was held in Aldborough on Ferguson farm, West of Brock’s Creek. This fair was a huge community event and continued for many years after. Tame bears were the main attraction at the fair, and it was not out of the ordinary to see a yoked buffalo pulling a cart of bears down the road. What a sight to see, early pioneers witnessing a circus for the first time rolling into town. Not long after this abnormal/exciting event was normalized.