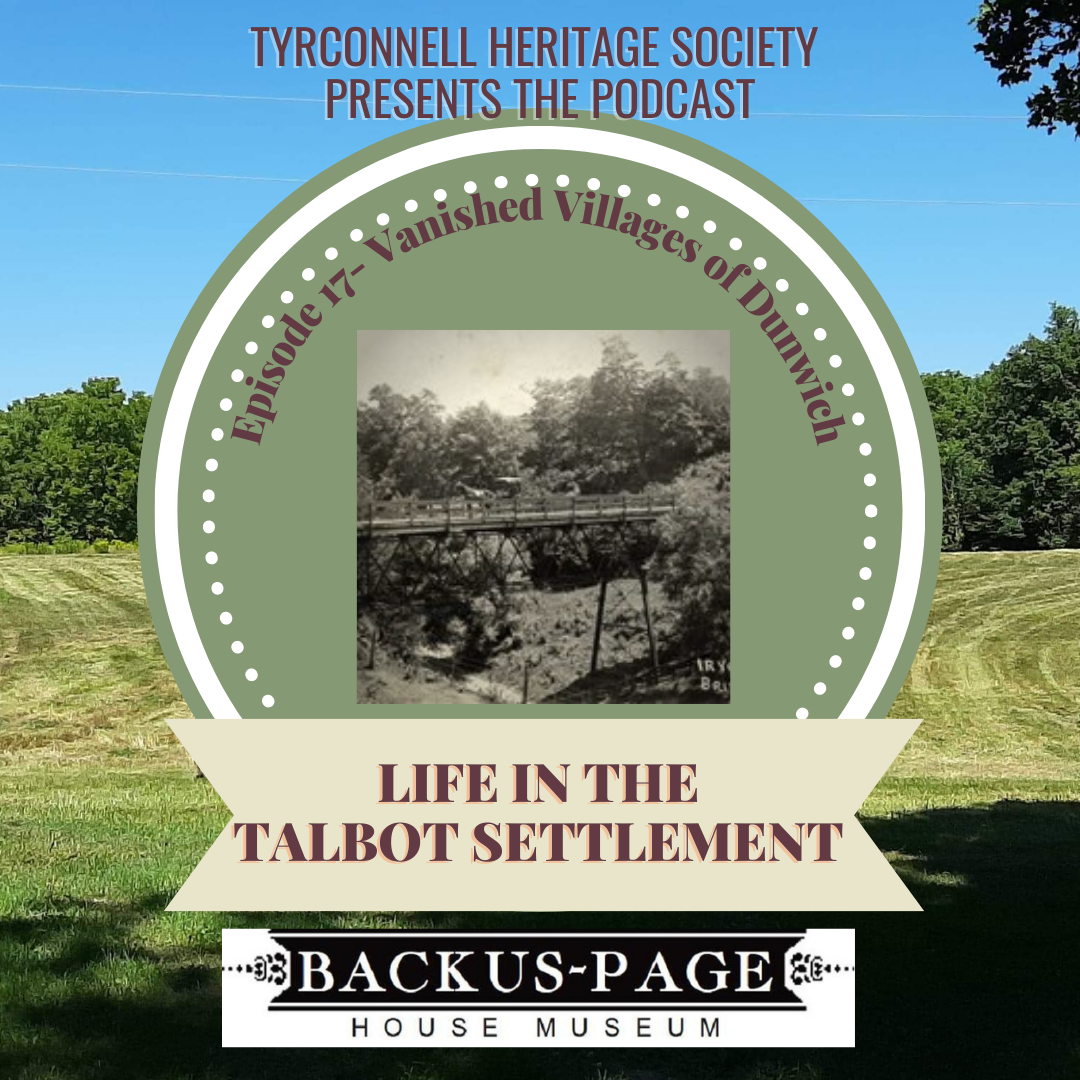 Our first town, Burwell’s Corners, started with the family of the same name. Mahlon Burwell, first generation Canadian, became a surveyor in 1809 and was registrar of Middlesex by 1811. He lived with his wife, Sarah Hawn, sons Hercules, Isaac Brock, Leonidas, John Walpole, Hannibal, Edward, Alexander, and daughters Louise and Mary. Alexander died as a child when he fell into a boiling cauldron, leaving Mahlon scarred emotionally and physically from the attempt to save his son. In later years Leonidas became rebellious, and disputes caused the family to fall apart. Even still, Colonel Burwell led the construction of the town’s registry office. He did innumerable surveys, supported the Anglican church, managed the post, started a brickyard, and preserved the Southwold Earthworks. The town also had a distillery, general store, grist mill, two sawmills (one that was horse powered), and the post office run from Burwell’s house.

Although a peaceful place, there is one shocking case of murder. George Ashby was an immigrant of English descent, a heavy drinker with a hot temper. On May 24th, 1838, after the volunteer militia’s annual reunion, it is believed that this mix of things led to him being attacked while walking home through the woods. They say it was a duel, as the severance of his head must have been done with a sabre. A bottle of spirits and a stick were tied in Ashby’s handkerchief and shoved down the open neck. The murderer was never found, and probably never looked for.

From there we move on to small, uneventful Campbelton. It was not an official town until there was a post office, but records of its establishment are inconsistent, so it’s hard to tell exactly when Campbelton existed. We estimate it was between 1873 and 1877. It was named for the first settler, Robert Campbell, who donated land for the church, school, and a store. All that’s left is the brick schoolhouse and the district burial grounds to the north.

The next community is best known as Cowal, but was known in 1863 as New Montreal. The origin is unknown, but a French name on a Scottish settlement was never going to last. They renamed Cowal after Comhghall, Scotland, where Robert Burn’s sweetheart, Mary Campbell, was born. The area was heavily wooded, which meant lots of timber but difficult farmland. The swamp didn’t help those matters. Yet the settlers were stubborn, and soon the area had two general stores, a post office, shoemaker, two sawmills, a blacksmith, and in 1859 a brick and tile business. Two schools served the area, each built, moved, and destroyed repeatedly.

The church was built back in 1853. Land obtained by Hugh Fletcher and the 42 by 30 foot edifice were dedicated in 1856 by Reverend Scott of St. Andrew’s Church, London Ontario. They made the church with no clear roads, so getting there on Sunday morning was difficult. They finally got a minister in 1865, Reverend John Stewart of Blythe. He did services in English and Gaelic.

Cowal dissipated in the mid-1890s, when the Dead Falls Hotel and grocery store burned down and they had depleted their lumber supply too much to rebuild. All that remains is one dwelling, a community hall, Chalmers United Church, and an unkempt baseball diamond.

Then there was Iona, which started as one of Colonel Burwell’s land surveys in 1809. The layout designated by the government didn’t account for the swamp, so he made new land designations with Colonel Talbot’s approval. William Brooke was the first recorded settler, an American. He built a general store, did well, decided to push his luck with a sawmill, went bankrupt, and after twenty-two years of residence had to flee the country and his debts. The other American was named Canute, a War of Independence veteran that boasted about his exploits too much for anyone else’s liking. In the war of 1812 he refused the oath of allegiance until Talbot threatened to take his land. It is said that his wife “hastened his death” (Sim’s history, volume one). Canute was buried unmarked in his backyard and she remarried to a man named Johnson.

The name came from the Southwold County side, Iona after the Scottish Holy Isle. The Dunwich side wished to call it Elliottsville after Mrs. Sarah Elliott. Her husband, George Elliott, was a businessman until death, leaving her a wealthy widow, and she donated much of her land to the Methodist Church. Sadly for Sarah, the post office called the shots, and they picked Iona.

The first postmaster was William Harris, also the clerk of the 4th division court. His son Albert died in 1860, and his wife Phebe Ann died three years later. After her death, he sank into despair. Some called him demented. He started going on long walks at night, and only six days after Phebe Ann’s death, he did not come back. When the search party found him he was leaning by a brook. They say he died of overexposure and a broken heart. Eerily, the spot he went to rest was to be the sight of W.H. Hendershott’s murder almost 30 years later.

After Harris, the post office went like a hot potato, hand to hand, owner to owner. Most businesses did. Mills struggled with water shortages and fires. William Taylor and Grosset McKay started a mercantile business that was carried on by Taylor’s widow until debt forced her to sell. There was also, during the American Civil War, Daniel DeCow selling raw materials to the fighters. It did make him very wealthy… for a time. But as the war went on he wound up with more product and credit notes than gain. He sold everything in little amounts until his death at 58 years old.

Some businesses did very well. Iona was known for its horse-powered travel industry. Peddlers were also favoured, especially by the women to whom they sold sewing supplies. At the back lot of what is now the school, one such peddler is buried. He was found frozen the day after a great snowstorm and buried where he lay, for fear the body held disease.

In 1866 the Fenian Raids made the people feel unprotected, and they decided to do something about it. A militia was formed, a drill hall built, and a name… well, they never settled on the name. Once the raids died down the drill hall was donated to the Fairgrounds. Barnum’s Circus performed there on a few occasions. Other famous folks from the area were internationally acclaimed astronomer James Craig Watson, James Philpott who assisted with the Underground Railroad, the illiterate Elder McDermon, and fiction author Luke Sharp/Robert Barr.

We can’t talk about Iona without mentioning Iona Station. If you listened to our previous episode, The Railroad Era of Dunwich and Aldborough, you would know that the town’s origin story can be completely summed up to trains. Iona Station is the birthplace of John Kenneth Galbraith, the famous economist and writer. His brother, Duncan Galbraith, opened the general store and ran the post office. Nicol McColl is another famous local. Born in Scotland, raised in Iona Station, he joined the army against the 1837 Rebellion, then climbed the ranks of the army onto the legal system. He became part of the first Legislative Assembly of Ontario and the Canada Southern Railroad scheme. He died at 66 years old. The town began to die out in 1888, after the grist mill burned down on May 31st.

Our next hamlet is known as Largie, but before that it was called Duff’s Corners. The original name came from Sir Alexander Duff, church leader and missionary. The Largie church was built in 1855 with a cemetery next door. There was also a general store from 1855 to 1884, a blacksmith, post office, cheese factory, and the infamous tavern.

It would be a travesty to talk about Largie and not tell the tale of its beloved Auger Hole. Built as a hotel in 1850, it became a tavern as time went on. It resided on Lot 11, Concession 1. The reason is disputed, but somehow the Auger Hole got on the wrong side of the tax collectors, deep in debt, and the tavern was going to be taken. A group of dedicated locals decided that that was unacceptable, and with logs, rope, and lots of manpower, they rolled the tavern across the street in one night, to Lot 11, Concession 2. Because the legal documents addressed Concession 1, they were rendered void, and the Auger Hole was saved! It continued to operate until 1880, when many of the regulars moved away. The building was moved again and refurbished as a pigpen.

To wrap us up, we return to the home of our Backus Page House. You’ve heard us call it Tryconnel and Little Ireland, but back in the humble beginnings it was merely Lot number 9. Being directly on Lake Erie, it was a popular shipping port and fishery. The first residents were the infamous Colonel Talbot and his assistant, George Crane. They came to Tryconnel in 1803. Once here, Crane married Isobelle Finlay, had a son named Anthony, and died in 1834. His son took over the farm and cared for Isobelle until she died in 1854. Anthony married Mary McVigars, had a daughter named Mary and two sons, A. Herbert and W.Albert. They died in 1903 at the ages 40 and 44. Their mother Mary only lived to be 42.

The next group of immigrants is the most well-known, including the Backuses, Pearces, and Mary Storey. They are the reason we call this area Little Ireland. To learn more about them, please see Episode 5 of our podcast, Irish Founding Families.

During the war of 1812 american renegades disguised themselves as indigenous peoples to raid the lakefront villages. Brigadier-General McArthur and his troops destroyed the Port Talbot mills, leaving the locals with a long journey or gruesome labour to grind wheat into necessary flour. When a new grist mill, saw mill, and warehouse were built in 1817, the people rejoiced. Business climbed for a while after that, leading to a general store, ashery, tannery, public library, carding mills, and two distilleries (one was owned by Archibald McIntyre, the other by a Mr. Steele. The first post office was built in the house of Colonel Leslie Patterson and ran from 1837-1852. There were two hotels; Tryconnel House run by William S. Froome and the Globe Hotel of Elias Hawkins. Early churches were Anglican and Methodist.

During prohibition, rum runners used Port Talbot’s lack of security to smuggle alcohol to the United States. In the middle of the night a truck would drive up without headlights to drop off a well-wrapped load and sneak away. Once it was gone a boat would slip up and retrieve it. Eventually they tried this closer to Port Burwell and were caught. Just as dangerous and yet less talked about are the waves around Plum Point. From children’s drownings to trapped or wrecked cargo ships, that area has taken many lives.

Colonel Talbot’s brother was first to call the area Tryconnel, but the name wasn’t adopted until James Blackwood began surveying the land in 1852. Blackwood and his brother ran several successful businesses until fires led to debts and they had to sell everything. It was bought back by the original distributor, George McBeth, and later bought by Meredith Conn.

Other businesses were also bought, sold, and do-si-doed as railroads developed and people stopped shipping things. After a while the pier was rendered unnecessary and left to the abuse of the Lake Erie waves.

While each of these communities faded for different reasons, it all sums up to progress. Railroads and Highways made long-distance transportation easier, and people didn’t need these little rest towns anymore. The work moved on, and natural resources were depleted. There wasn’t a reason for them to stay. Us at Backus and the Heritage Society, we stay for these stories, and we hope you will too!