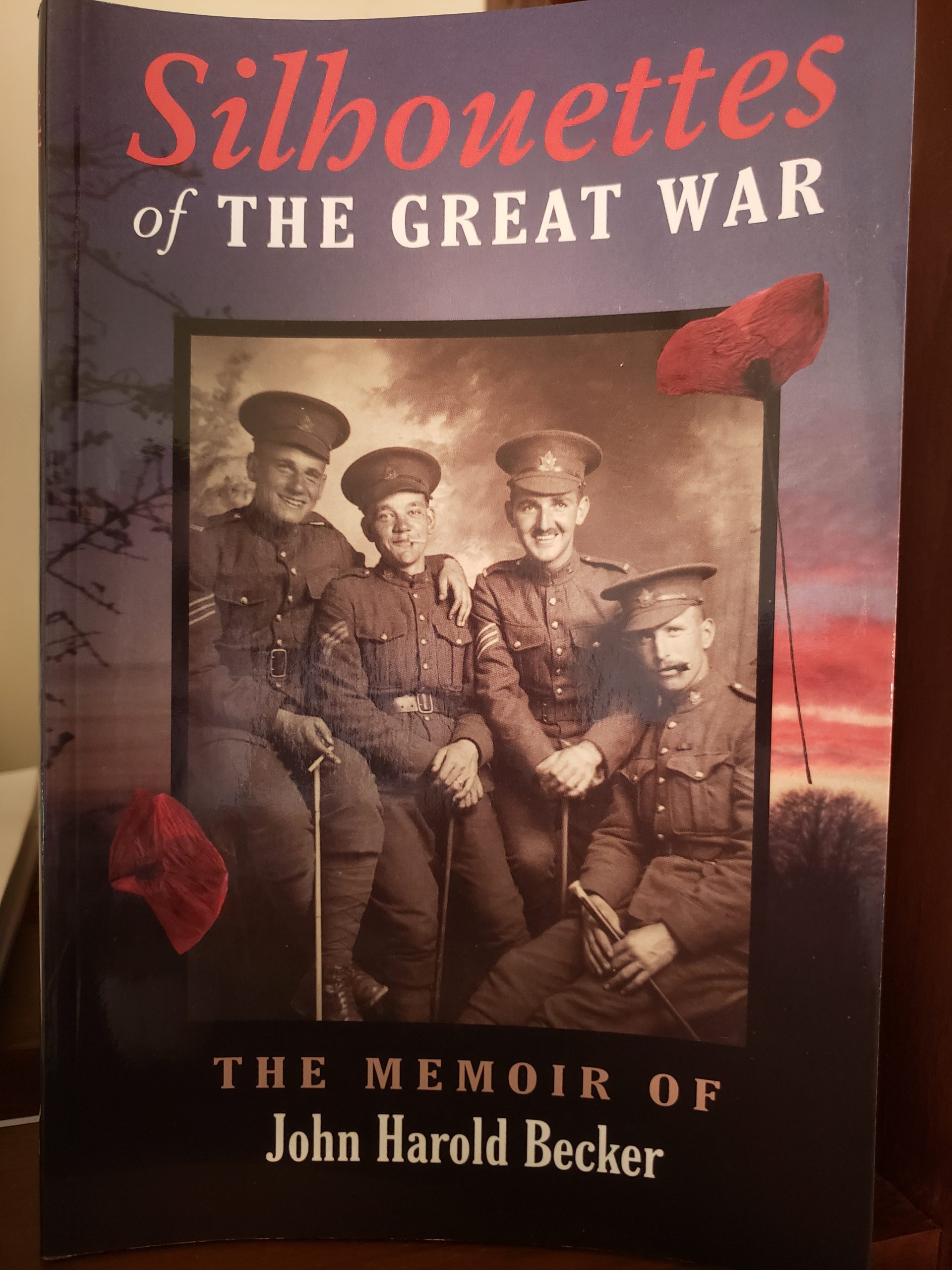 Today, we at the Backus-Page House Museum would like to take some time to honor those who served in the line of duty in order to keep us safe. While we would like to share the stories of the many heroes of Elgin County, today’s post will be specifically about West Lorne native John Harold Becker.

We are fortunate enough to have a well documented account of Becker’s time serving in the 75th Canadian infantry battalion, as he later compiled his story into one cohesive memoir in 1930, which was later published in 2001 under the name Silhouettes of the Great War.

John Harold Becker was born in West Lorne, Ontario, Canada on November 2, 1894. Before the Great War broke out, Becker spent his days going to school in Dutton and eventually working as a clerk-stenographer for the trainmaster in St. Thomas.

Like many Canadians, John Becker was swept up in the strange air of excitement that came with the outbreak of the Great War. After the Boer war, many believed that military service would be a way to experience adventure and that the Great War would be quickly resolved.

Leaving the comfort of his previous life to serve his country in 1915, John Harold Becker became a Sergeant in the reserves, and later joined Elgin County’s own 91st Overseas Battalion, which trained in London England.

Though he was recognized as an officer while serving in the reserves, in 1917 Becker was stationed in France, where his title was not recognized, instead serving as a private.

Soon after, John participated in a trench raid, an encounter that wiped out half of his battalion, and was so devastating for both sides that a temporary ceasefire followed in order to allow time for the wounded to be recovered.

Over the next six months, Becker experienced the worst of trench warfare, the awful conditions, the loss of friends, and even saw one soldier, who he refers to only as “X” commit war crimes. Though in an incredibly stressful situation, Becker continued to fight for his country, and earned the rank of Corporal by 1918.

In August of 1918 during the Battle of Amiens, Becker was wounded in the left shoulder and was sent back to England to recover.

Over the course of the Great War, brave soldiers like John Harold Becker suffered for the protection of their homes. Whether they sacrificed their wellbeing or their lives, Canadian soldiers deserve to be remembered always, but especially today.

For those interested in learning about John Harold Becker’s story in more detail, copies of Silhouettes of the Great War, are available at the Backus-Page House Museum’s gift shop and our online store at https://backus-page-house.square.site/shop/books/3

Says he was qualified as an Officer?  Where did you get that?  From the Militia Quarterly?  His service record indicates he was a Provisional Sergeant and the November 24, 1915 Journal has him listed as completing the non-commissioned officer course.  The December record in his file says he reverted to Private.  He missed training in January and February 1916.

Looking at the 25th Regiment listing of officers July 1, 1915 there is no John Harold Becker listed.  In his attestation he said he had a year with the 25th. Do the finger count.

Please update your story. Correct it. It demonstrates lack of investigation.  The 1930 Biography seems to boosterism for himself.

On BECKER.  He trained in LONDON ONTARIO with the 70th and back to St Thomas to be briefly a Sergeant with the 91st!  If you look at the Embarkation Roll for the 91st  you will see that he went over on the SS OLYMPIC as a Sergeant.  The Battalion Orderly Room was operated by Sgt Wright.

With due regard for the Museum,