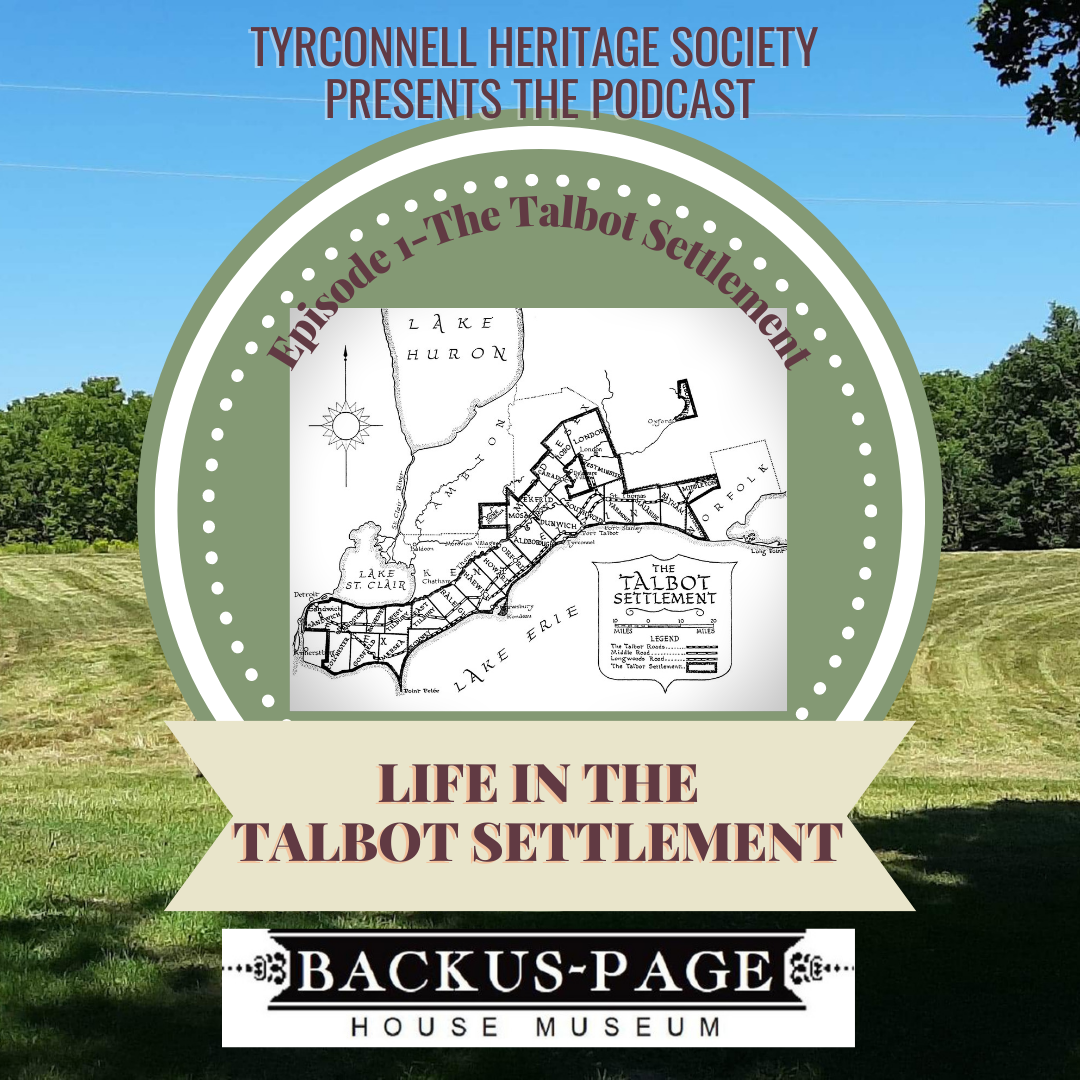 Welcome to our first episode of Life in the Talbot Settlement.  You may be wondering what and where is the Talbot settlement, who is Talbot, why is any of this important and in general what is this podcast going to be about?  Before I answer all those questions, I’d like to acknowledge funding from the Department of Canadian Heritage and Tyrconnell Heritage Society operators of Backus-Page House Museum

Hi.  I’m Angela Bobier your host and Cultural Manager at Backus-Page House Museum.  The museum is located in Southwestern Ontario, Canada in the west end of Elgin County and we preserve and promote the history and culture of the historic townships of Aldborough and Dunwich, now called the Municipality of West Elgin and Municipality of Dutton Dunwich.  I grew up and live here and am proud and privileged to hold the community role of Cultural Manager.  There’s nothing I love better then telling anyone who will listen about my hometown history.

We have 8 episodes of this podcast ready for you but I thought it important to add a shorter introductory episode to get you acquainted with me, our museum, Society and the Talbot Settlement in general.  Our last episode in this first series will be based on questions you, our enthusiastic listeners, submit by email to info@backuspagehouse.ca and on social media.  I look forward to answering those questions.  We will be dedicating an entire episode to the indigenous people of the Neutral Nation and Iroquois who lived in this part of Upper Canada.  So as not to spoil that, let me jump ahead.

In the late 1700s and early 1800s Upper Canada was beginning to grow rapidly. Settling in Upper Canada was a rather long and strenuous job, fields were covered in large trees and rocks which made clearing land to plant crops a hard task. Along with the geographical challenges settlers faced, they had to deal with the rough weather, meaning long harsh winters and hot summers.

Thomas Talbot, for whom the settlement is named after, became a private secretary and aide to Colonel John Graves Simcoe, the first Lieutenant Governor of the newly created province of Upper Canada in the year 1792. Talbot stayed with Simcoe as a secretary for 4 years accompanying him on travels throughout Upper Canada where the idea of founding his own colony was born.

The Talbot Settlement is a large area, located along the north shore of Lake Erie, spanning from Long Point in Norfolk County to the Detroit River.  To give perspective on how big the settlement in Upper Canada was it spanned twenty-nine townships and housed many major towns/cities like London, St. Thomas, Woodstock, Sarnia, Chatham, Windsor and more.   We describe Dunwich Township as the heart of the Talbot settlement because Thomas Talbot set up his home here.

Thomas Talbot, an Irish Anglican aristocrat was given an initial 5000 acre grant in the south part of Dunwich and Aldborough Townships to place settlers on.  He arrived, in the rain, at what would be Port Talbot on May 22, 1803.  He noted in his journal “Sunday, 22nd May 1803, taken possession of Dunwich”. He and his hired help built log cabins, mills and began to clear land, plant crops and get ready to place settlers on these land grants.   Thomas supervised the construction of a 300 mile road paralleling Lake Erie, established thousands of settlers in his “principality” and controlled the settlement, much to some people’s dismay.  Almost anyone could obtain a land grant, but settler duties needed to be completed and a fee paid to receive your patent.  One such duty was that Half the road had to be cleared in front of the lot and no trees were to be left standing within 100 feet of the road.  That’s how you get good roads for the transportation of people and goods built in this era.

In 1812, Major General Sir Isaac Brock, Senior Officer Commander of the Troops and senior member of the [Executive] Council, putting him fully in charge of both the military and civil authority of Upper Canada, named Thomas Talbot Colonel of the 1st Middlesex Militia and supervisor of all militia in the London District, which was made up of the militias of Middlesex, Norfolk and Oxford for the War of 1812.

In 1817, the city of St. Thomas was named for him.  We now have Talbot Line, Talbot Trail, Colonel Talbot Road connecting St. Thomas and London all named for our infamous and controversial founder.  In 1836, an official assessment showed that Talbot settled 500,000 acres-representing a little over 3,000 lots with a population of approximately 50,000. Pretty good numbers for having only arrived in 1803.

For more Thomas Talbot details, we cover his life and interesting stories in the next episode.

In the meantime, I encourage you to visit Backus-Page House Museum in person.  Check our website for hours of operation at www.backuspagehouse.ca

The Backus-Page House is of Georgian design, in what is termed “Federal Empire Style” and reflects the American origins of the Backus family and of the training of the builder, Robert Morris.  Morris emigrated from Wales to the United States and completed his apprenticeship in Philadelphia.  He moved to the Talbot Settlement because he found out that there was work available in the growing communities. Morris constructed many other homes in the area including the Bobier home (now Victoria Manor in Dutton) and the addition to the Stephan Backus House on Lakeview Line. He also built the steeple tower of St. Peter’s Anglican Church. Morris completed all the work on the house such as the woodworking, brick making, lath and plastering.  This 2800 square foot home was built using virgin oak and black ash beams and joists.  The three original fireplaces were hand worked, with panelling and mantels of black walnut.  The floors in the home were tongue and grooved by hand.  According to a visitor, the style of trim is the same as 1840’s New York brownstones.

THS Tyrconnell Heritage Society entered into a 50 year lease agreement with the Ministry of Natural Resources in 1997 and operates to preserve and promote the history, culture and area surrounding the Backus-Page House Museum within the Talbot Settlement for the greater community and future generations while celebrating the past.  Being in John E. Pearce Park enables our visitors to also walk the Spicer Trail through Carolinian Forests and the Storey Wetlands Trail.  John E. Pearce, descendant of early settlers, donated a tract of land for a park and on August 17, 1959 a large plaque designed by Donald Inman was unveiled.  Morley and Grace Page donated an additional tract of land including the house to be added to the park in 1976.  We are honoured to partner with Ontario Parks in maintaining Pearce Park.

Life in the Talbot Settlement is a production of Tyrconnell Heritage Society, operators of Backus-Page House Museum, funded by the Department of Canadian Heritage. Your host has been Angela Bobier.  Music provided by Jack Witmer.  Thanks to our Producers Katlyn Reintsma and Stephen McLachlin.

Tune in next week to learn about the life of Colonel Thomas Talbot, Founder of the Talbot Settlement.

Donations can be securely made at   https://www.canadahelps.org/en/charities/tyrconnell-heritage-society/ to assist with ongoing operations at Backus-Page House Museum.