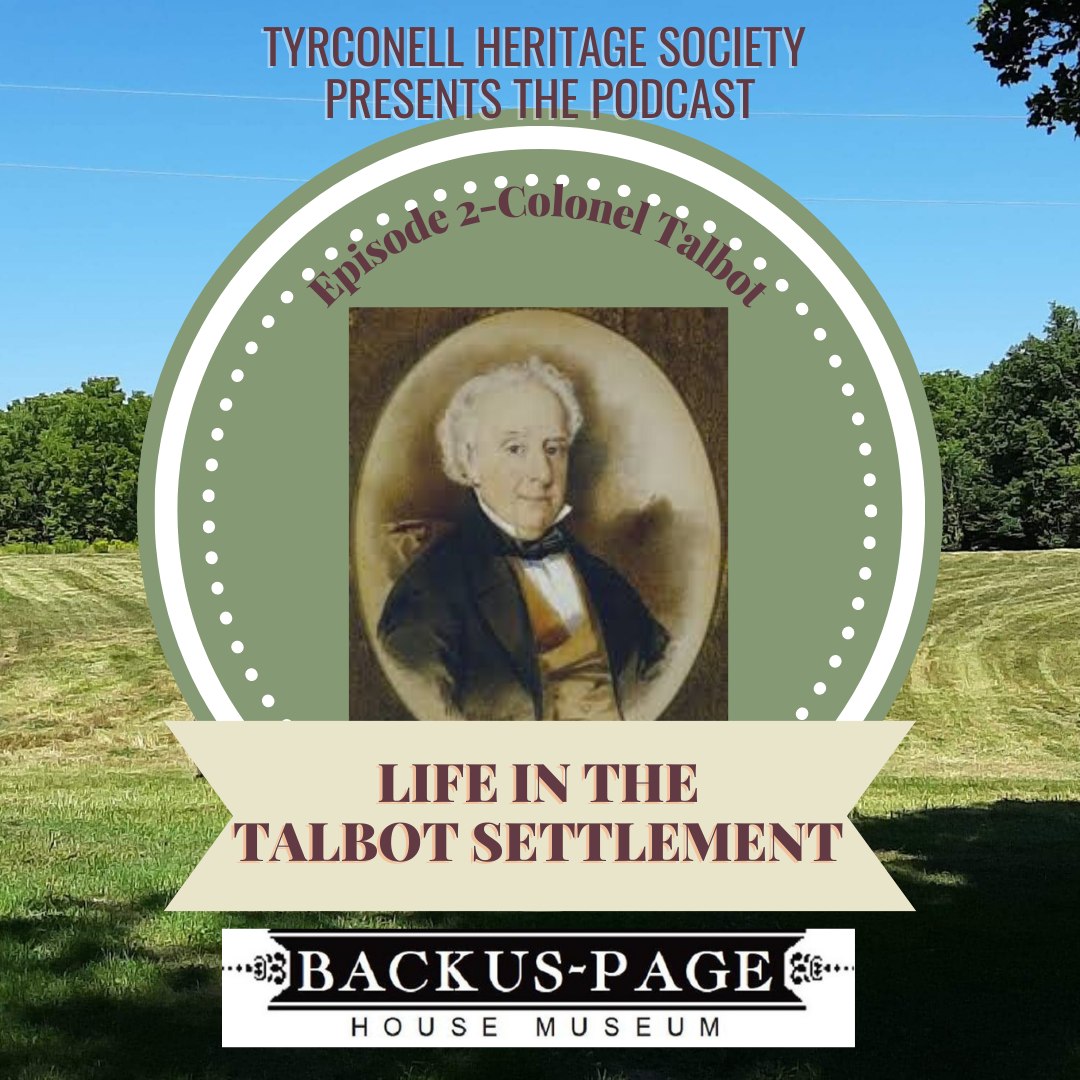 Listen Here start at Episode 1 or skip to Episode 2

Today I’ll be chatting about the Founder of the Talbot Settlement Colonel Thomas Talbot.  Thomas was responsible for placing settlers in what became 29 townships along the north shore of Lake Erie in southwestern Ontario.  Before we begin, I’d like to acknowledge funding from the Department of Canadian Heritage and Tyrconnell Heritage Society operators of Backus-Page House Museum.

The Talbot name has been an honored name among English nobility since Richard Talbot, a Norman knight, who settled in England during the reign of William the Conqueror.  A century later another Richard Talbot left England to assist King Henry II in asserting authority in Ireland.  In 1174, as a reward Richard received a royal grant of the fief of Malahide where he built a castle on a limestone elevation beside the Irish sea. The Talbots were one of the longest families to inhabit one area and castle in Ireland having ancestral lands since the 12th century.

Born at Malahide castle in Dublin on July 19, 1771, Thomas Talbot was the Fourth son in a family of 12 children of Sir Richard Talbot and Lady Margaret O’Reilly Talbot.  Being the 4th son, Thomas would have to make his own way in the world as only his eldest brother would inherit the titles and lands of his family.

Thomas spent his childhood years at Malahide Castle and Dublin among the highest rank of nobility.   He was educated in his early years in Malahide and later at Manchester Free School in England.

Thomas began his military career as an ensign in the 66th Regiment of Foot (a unit in the military) at age 11 a few weeks before his 12th birthday. On September 27th of 1783, 3 weeks after the signing of the treaty that ended the war with American colonies, Thomas was advanced to rank of Lieutenant and decided to retired with half pay at age 13.  Anyone wish they could have retired at age 13???

From 1786 to 1788, Talbot was an Aides-de-camp to his distant relative, the first Marquess of Buckingham, Lord Lieutenant of Ireland George Nugent-Temple-Grenville. This surrounded Talbot by the environment of the Dublin court.

Talbot first came to Canada in the spring of 1790 at the age of 21 when he sailed to join his regiment, the 24th regiment of Foot doing garrison duty in Quebec, then Montreal.

Mostly from Buckingham’s recommendation, Talbot became a private secretary and aide to Colonel John Graves Simcoe, the first Lieutenant Governor of the newly created province of Upper Canada in the year 1792. Talbot stayed with Simcoe as a secretary for 4 years.

On one of Simcoe and Talbot’s trips they went to where Simcoe later planned to establish his capital modern day London, Ontario at the forks of the Thames River. This never happened and York, now Toronto is the provincial capital of Ontario.  On this trip Talbot would have seen the land that was one day to bear his name and the idea of founding his own colony took place in his mind.

Thomas took to the battlefields in Holland and Germany, fighting the French in the 85th regiment of foot as a Captain in the Duke of York’s army.   The following year he was promoted to Lieutenant-Colonel in the 5th regiment of foot in England. After 5 years he sold his commission abruptly on Christmas day, 1800.

Because of his rank and connections, Talbot had much influence on the British and the provinces government. For instance, he had an intimate friendship with the Francis Gore, the 3rd Leiutenant Governor of Upper Canada, along with his wife and staff who treated him like family.

Talbot applied for a grant of land in the township of Yarmouth, in modern day Elgin County, on Lake Erie. If Yarmouth was already taken Talbot was to have any other township he might choose. The settlers he placed on land were to be from either Europe or America and be placed on his grant of 5000 acres which he promised he would use for agriculture and cultivating hemp (for sailcloth, cordage, paper and lamp oil). This would provide for 100 families. This arrangement called for a maximum grant of 20,000 acres for Talbot’s own benefit.

Talbot, accompanied by 4 others he hired in York (now Toronto) Corporal William Powers, Patrick Whealand, George Crane (retired British army officer), and Samuel Rogers.  He also had a survey crew headed by William Hambley, Deputy Surveyor.  Talbot captained his small boat called the “Mayflower” and landed in Port Talbot the 21st of May 1803.  He and his employees erected a log house on the hill facing the lake to the South overlooking the valley of Talbot Creek to the North-East. The log home had 3 rooms. Storeroom, sitting room, and kitchen. What the home lacked in beauty; the location it was in made up for it. He called his little log cabin “Castle Malahide” after his old home back in Ireland.

The nearest European settlement was 40 miles away at Charlotteville east of Long Point and westward to the Detroit River.

May 31 Talbot hired William Caffry and records that Danial Walker came to live with him June 13, 1803.  That month he also hired carpenter James Witton from Niagara and his apprentice James Newlands to construct buildings.  Ann Lawlor was also hired to assist Mrs. Powers, his housekeeper and we assume the wife of Corporal William Powers.  Isabella Finlay from Glasgow Scotland was hired by Talbot in May, 1806 and left his service in December, 1806.

The first watermill was erected at Talbots own expense, a short distance above the mouth of Talbot Creek. It is said to have been working by 1808 but was burned down by American marauders during the war of 1812-14.

After the completion of the sawmills, since no European settlers had come yet, Talbot invited First Nations Peoples from nearby reserves to celebrate the completion. The natives are said to in turn adopted him as a member of their tribe.

Talbot was a simple man, in the words of the settlers, “Talbot baked his own bread, milked his own cows, made his own butter and cheese, washed his own clothes, and ironed and dressed his own linen” despite being aristocratic and living his life around nobility.

During the war of 1812 Colonel Talbot was the commander of the London and Western District’s militias of Middlesex, Norfolk and Oxford. They took part at the Battle of Lundy’s Lane and Fort George.

After the War of 1812, the Talbot Settlement developed rapidly along with the rest of Upper Canada.

Talbot would deal with applicants wanting to acquire land through a window of his house. When the window was closed, people would have to wait. And if he didn’t approve of the applicant, he would slam the window shut. This system of working through a window took place after Talbot was thrown to the ground and handled very roughly by a Highlander named Duncan Patterson. Mr. Patterson held him on the ground until he was promised the desired location. After this incident the Colonel was more cautious and would have his personal servant Jeffery Hunter release the dogs once Talbot rejected applicants.

He was infamous for writing the settler names on the settlement map in pencil. If displeased or if the settler didn’t complete their settler duties in the approved time, he would simply erase their name from the map, taking away their rights to the land and then give it to someone else.

He supervised the construction of a 300-mile(480km) road running along Lake Erie. This road linked the Detroit River and Lake Ontario. Because Talbot did his work so well, the government placed the southwestern part under his charge. This presented Talbot the opportunity of extending the road from the Long Point region to the Detroit River.

In the years 1816 to 1818, a large number of Scottish settlers came from New York, the Red River Settlement and Argyllshire, Scotland and were given land in Aldborough and Dunwich. These settlers did not like Talbot very much because they faced higher fees in obtaining their deeds than other settlers and Talbot kept more land than he was supposed to while the settlers got 50acres and not the promised 200. He is said to have ruled the settlers like the Irish aristocrat that he was.  – In many cases Talbot would place them on lots not yet granted to him, providing the settlers with 50 acres, and keeping the other 150 for himself. When the government learned of this, they initially refused to grant him title to the lands but eventually relented, demanding that Talbot submit a plan of locations and a signed statement that the settlers listed thereon were each resident on the land.

There was much controversy around Talbot mainly because he kept the original 5000 acres (locating settlers outside of this land) and dropped his promise of growing hemp on those acres.

Talbot submitted these plans with the locations for 186 settlers in 1821, receiving 50 acres in trust for each and an outright grant for himself of 40,420 acres.

By 1836 when his activity in his agency was slowly coming to an end an official assessment revealed he settled 500,000 acres-representing a little over 3,000 lots with a population Talbot claimed, of 50,000.

By 1837 he had placed settlers in 27 townships spanning from Long Point to the Detroit River.

In 1848, Talbot left for a trip to England with his companion and servant George Macbeth. They stayed almost a year and upon returning Talbot had an argument with Richard who did not approve of Talbots habits and clothes. Richard was also jealous of Macbeth as he realized that his own position was not secure. Talbot decided to give Richard half of the estate and the other half to Macbeth with a small allowance (20 pounds) for a widow of a former servant.

Talbot left for England again in the summer of 1850 and stayed for another year. During this time, he got sick and his health declined. Once he returned home, he found that Richard had left and had been renting the home to John Sanders. Macbeth offered Talbot to live with him in London and that’s where he remained until his death.

Talbot died February 5th, 1853 at the age of 83 in London, Upper Canada. He is buried in the cemetery of St. Peters Anglican Church near Tyrconnell in Elgin County.  Backus-Page House Museum is fortunate to have one winding sheet as post of our collection and it is said to be the one Colonel Talbot was wrapped in for part of his journey from London to Tyrconnell, were he was prepared for burial.

From a letter written on September 21, 1994 by Wilma Henrickson to Ken Welch here is the story of the winding sheet……

The Story of the Talbot Settlement 1803-1840 by Wayne Paddon

The Talbot Regime or the First Half Century of the Talbot Settlement by C.O. Ermatiger

The Backus Page House Museum and Tyrconnell Heritage Society acknowledges the land we are on today as the traditional territory of First Nations People.  As settlers at a settler focused museum, we value both the significant historical and contemporary contributions of all Original Peoples and ask how we can be supportive in Indigenous Cultural Renewal?

Life in the Talbot Settlement is a production of Tyrconnell Heritage Society, operators of Backus-Page House Museum, funded by the Department of Canadian Heritage.

Your host has been Angela Bobier.  Music provided by Jack Witmer.  Thanks to our producers Katlyn Reintsma and Stephen McLachlin.

Thank you for listening.