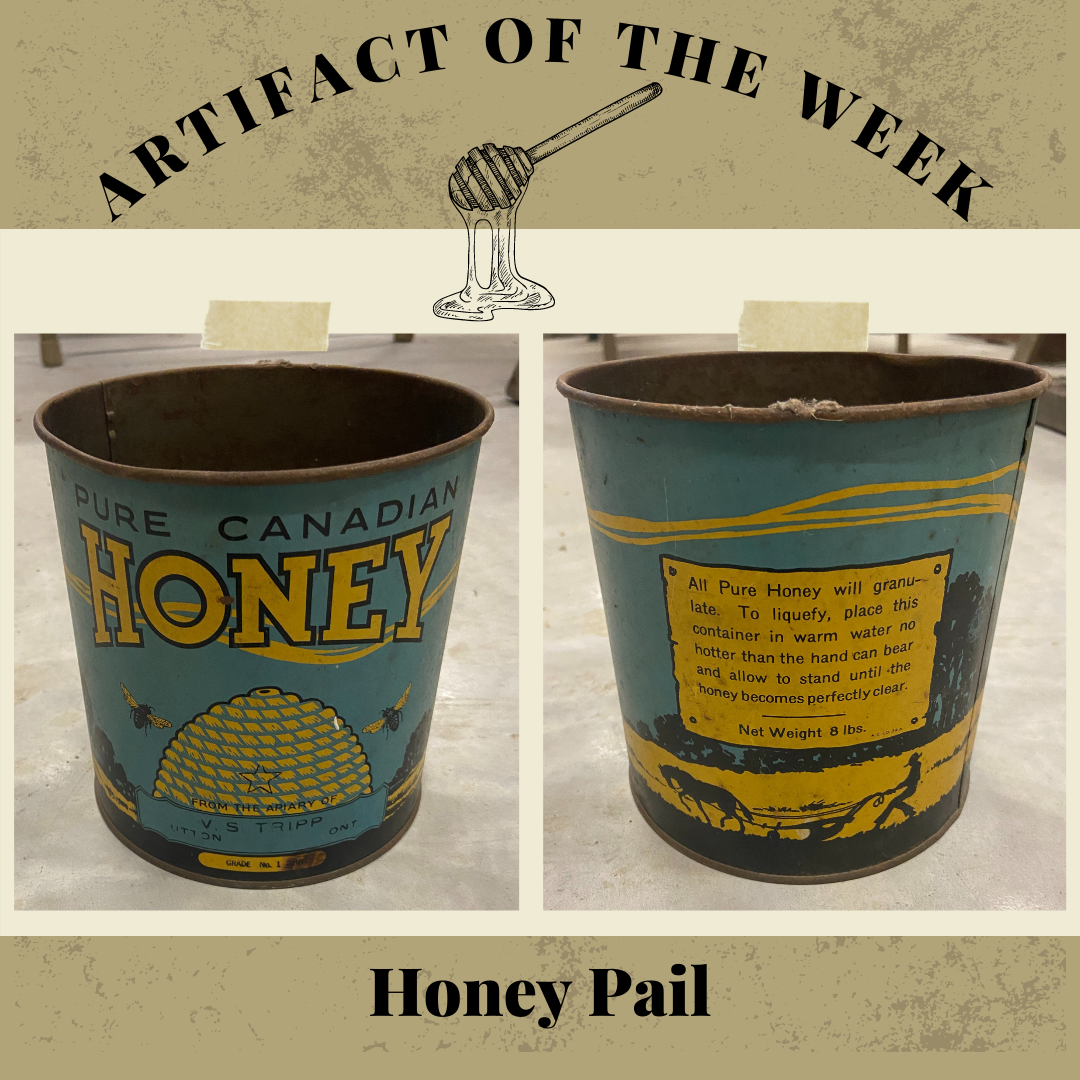 The Man Behind the Honey

This early-mid 20th century pail is from the apiary of V.S.Tripp in Dutton, ONT. Owned by apiarist Victorr Stanley Tripp, more commonly known as Stan, in the 1940s. Stan was also a butcher in Dutton at this time, and operated for 25 years. Tripp was a very important member of the Dunwich area, as he was the reeve of Dutton Dunwich in 1946, and one of the directors forming the original Dutton Dunwich Chamber of Commerce in 1950.

The net weight of this pail of honey is 8lbs, compared to the sizes of honey we buy today, that seems like quite a lot for one family. The grade of honey is determined by a few different factors; including moisture, flavour, presence of foreign materials, and percentage of water soluble solids. In accordance to these factors, honey must be labelled “Ontario No. 1“, “Ontario No.2“, or “Ontario No.3“. If you look closely at the bottom, this pail of honey is labelled “Grade No. 1” meaning the honey is 100% Canadian, pure, free of debris, and has a light/golden colour. The bold blue and gold paint is in very good condition, although there is significant rust, the illustrations and inscriptions ‘Pure Canadian Honey’ and instructions describing how to liquify honey on the back are still very much legible.

“All Pure Honey will granulate. To liquify, place this container in warm water no hotter than the hand can bear and allow to stand until the honey becomes perfectly clear.”

A Small History Lesson on Honey

The original sweetener is considered one of the oldest ‘human’ products. The use of honey has been tracked back as far as Ancient Egypt. The sweet substance was used as a dietary supplement due to its high sugar content and was basically used as liquid energy. Honeys use began to grow in beautification, embalming, ceremonies, medicines, and of course, cuisine. One of its earliest uses in food was traced back to Ancient Greece. Its biggest use was to preserve fruits. By coating the various fruits, the properties of honey would prevent the foods from expiring, this method of coating can still be found in sweets today. Not only was it used as a culinary additive, but could be found in beverages as well. Made of honey and other additives fermented in yeast, mead is arguably the oldest alcoholic beverage and traces of it can be found all across the world. Of course we can’t forget the classic long held method of its use to sweeten tea. Honey was used for liver, cardiovascular, and gastrointestinal problems by the Ancient Egyptian, Greek, and Romans. It was widely used in the household for a variety of other remedies. For example it was thought to cure; hangovers, insomnia, colds/coughs, burns, gout, tuberculosis, and my personal favourite, baldness. As science progressed, honey now has limited use in modern medicine due to the lack of scientific support. As sugar became popular around the 1500s, honey began to lose its importance. Sugar began to replace honey in medicine, tea, cuisine, and price. By the 1800s, honey slowly became more expensive than sugar and was used less and less. Honey has been used over centuries for many different purposes, what do you use honey for today? Comment down below!