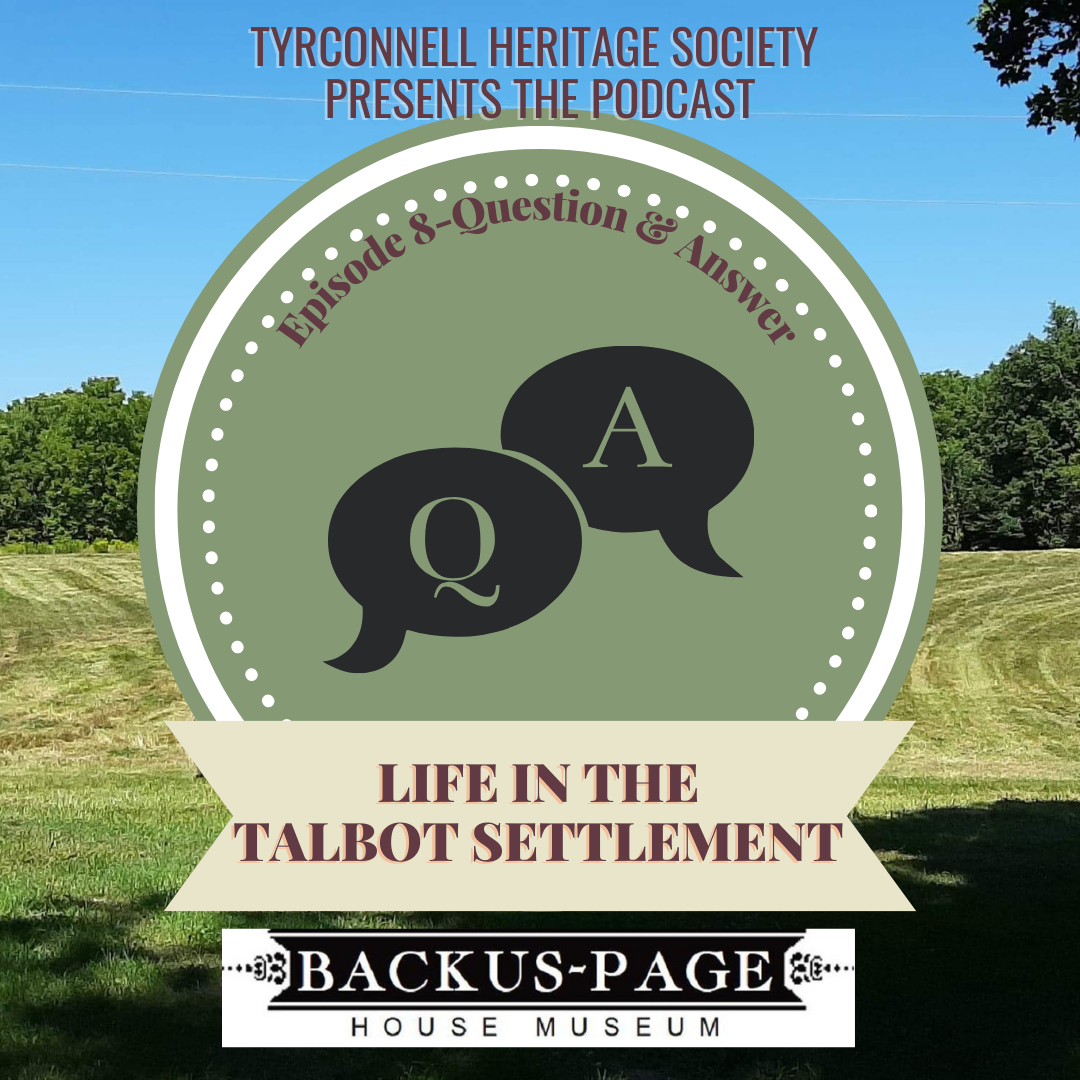 We’ve been receiving lots of questions from the last 7 episodes through email and social media so today we will be answering them all.  If you also have questions about Life in the Talbot Settlement please leave us a comment or send an email to angela@backuspagehouse.ca Thank you in advance.

Question 1 asked me to discuss where some of our road names have come from.  This could be a series by itself but I will talk about four of the roads in our area.

In Aldborough, now called West Elgin there is Kerr Road.  In 1850 Kerr and Furnival were the only 2 roads going north and south but they only went from the Talbot Road to what is now Marsh Line and not all the way to the Thames River as they do now.  Kerr Road was named after early settler John Kerr who arrived in 1818 from Argyleshire, Scotland.

Graham Road presently running from the Lake to the Thames River through Eagle and West Lorne was named after Hugh Graham who settled in 1818 on Lot 19.  Hugh had served in the Royal Navy with Lord Nelson and taken part in the battle of Copenhagen.

In Dunwich there is Coyne Road and Currie Road.  Coyne Road was named for Henry Coyne who settled at the corner of Coyne and Talbot in 1824.  Henry farmed and operated an inn.  If you stop by this corner the Municipal Heritage Committee has put up a Coynes Corners interpretive sign.

Currie Road is named after Donald Currie and his father John who emigrated from North Knapdale, Scotland in 1819.  Donald is interred at Black’s Cemetery.  More details can be found in The Early History of Dunwich Township released in 2004 by the West Elgin Genealogical and Historical Committee and available in our museum gift shop or for purchase online.

Question 2 was more open ended.  A listener asked if we could share more information about the town of Tyrconnell.  A Brother of Colonel Talbot named it Tyrconnell with Port Tyrconnell at the foot of Erie Street.

The name Tyrconnell took hold when James Blackwood purchased the land and had it surveyed into lots and streets in 1852.

Messrs. Buller and Haynes built a grist mill on the lower section of No.9 Creek in 1817

Mr. Colby erected a sawmill on the upper portion of the creek in 1820

Absolem Shade built a warehouse near the lower mill and turned a portion of it into a general store.

1826 Archibald McIntyre erected a distillery just below the sawmill.

Colonel George Henry purchased Colby’s and Buller & Haynes Mills, and then erected a carding mill while his brother Phillip purchased the tannery that was founded by Joseph Fox.

The next general store was established and opened by Anthony Conn south of Colonel Henry’s Grist mill in 1830.

Blackwood opened a six story wool mill erected on Mill Creek, however it burned down in 1851

Blackwood would later build a massive home (which he later lost); open a ware house in 1856 and ship grain out of the port.

John D. Pearce set up the first cheese factory in the district in 1865

1870 a telegraph line was connected to Tyrconnell.

The Pier was five hundred feet long, thirty feet wide and built out into the lake

This pier was the means by which Tyrconnell became an important shipping port until the pier fell into decay and was closed in the year 1890.

The coming of the railroads spelled doom to this port.  Trade was diverted to other ports such as Port Stanley and Port Burwell that were serviced by a railroad.  All that remain are the concrete pylons of the old iron bridge.

Question 3  How did the settlers predict the weather?

Predicting the Weather: (From Historic Communities: Customs and Traditions by Bobbie Kalman)

Signs that it was going to be Sunny:

Signs that it was going to be Rainy:

Question 4  A listener heard we now have two beds from Colonel Talbot.  They wanted to know more.

The Ker family purchased the Talbot Estate on Fingal Line in _______.  Inside were many of Colonel Talbot’s possessions.  When the family sold Malahide House they took those historic items with them.  We now have Colonel Talbot’s bed which we date back to 1803 – 1810.  It’s very simply built.  The other bed and chest of drawers is more ornate and the story is Talbot had these made by a carpenter in Fingal or Middlemarch when the Anglican Bishop of the Diocese of Quebec visited.  St. Peter’s Anglican Church was part of the Diocese of Quebec at the time and Rev. Charles J. Stewart had visited before at least ____ times.  Due to his new rank of Bishop we suppose Talbot wanted a better bed and dresser for him to use.  You can see all three items when you tour Backus-Page House Museum in our new Talbot Room on the second floor.

Question 5  Are the two Backus history places related some how?

Backus-Page House Museum operated by Tyrconnell Heritage Society which is us.  We are not related to Port Rowan’s Backhouse Mill in Backhouse Heritage and Conservation Centre and Backhouse Woods also known as the Backhouse Historic Site.  The families are not related as far as we can tell by current genealogy research.  We both normally host annual War of 1812 reenactments and with similar names and both being located inside parks and conservation areas we do get confused through each other.  Remember we are Backus-Page with a house, barn, Agricultural Centre and gardens and are located south of Wallacetown in the west end of Elgin County.  The other location is in Norfolk County near Port Rowan and Long Point and have a mill, houses and village.

Question 6  What is the bee or honey house for and where did it come from?

Settlers attracted bees to the bee house by dropping honey on hot stones around the building.  Inside were large empty boxes and wild bees from the woods flew to the bee house and produced honey in the boxes.  Knives were used to cut the honey from the boxes.

Our honey house is a replica built by students at Parkside Collegiate Institute in St. Thomas between 1979 and 1984.  The original honey house was built on the William Pearce farm at Wallacetown by a travelling carpenter between 1828 and 1831, possible Samuel Hockridge of Yarmouth Centre.  It’s a gem with gothic pointed doorway and windows for the bees to enter and exit and carved fretwork beneath the eaves.  Originally the roof had split shingles in a pattern and all was made of unpainted pine.

Stewart Pearce willed the building to the Elgin County Pioneer Museum in 1967 and it was moved the 32 Talbot Street in St. Thomas in January of 1968.  10 years alter vandals burned the honey house to the ground.

Mr. Thomas and Mr. Hatherall at Parkside instructed students to draw blueprints from photographs and then rebuild using weathered boards.  The museum held a Bee Social in June 1984 to welcome back the building.  The Moorhouse family (relations of the Pearce family) donated a sign in 1998.

The honey house replica was brought to Backus-Page House Museum in December 2006, along with the blueprints and the Pioneer Museum moved to Sunset Drive and is now the Elgin County Museum.

A book about the Honey House is available in our museum gift shop thanks to Mary Clutterbuck.

We are taking a week off and then coming back with 12 new episode beginning with a 2 parter about how the War of 1812 effected the Talbot Settlers.