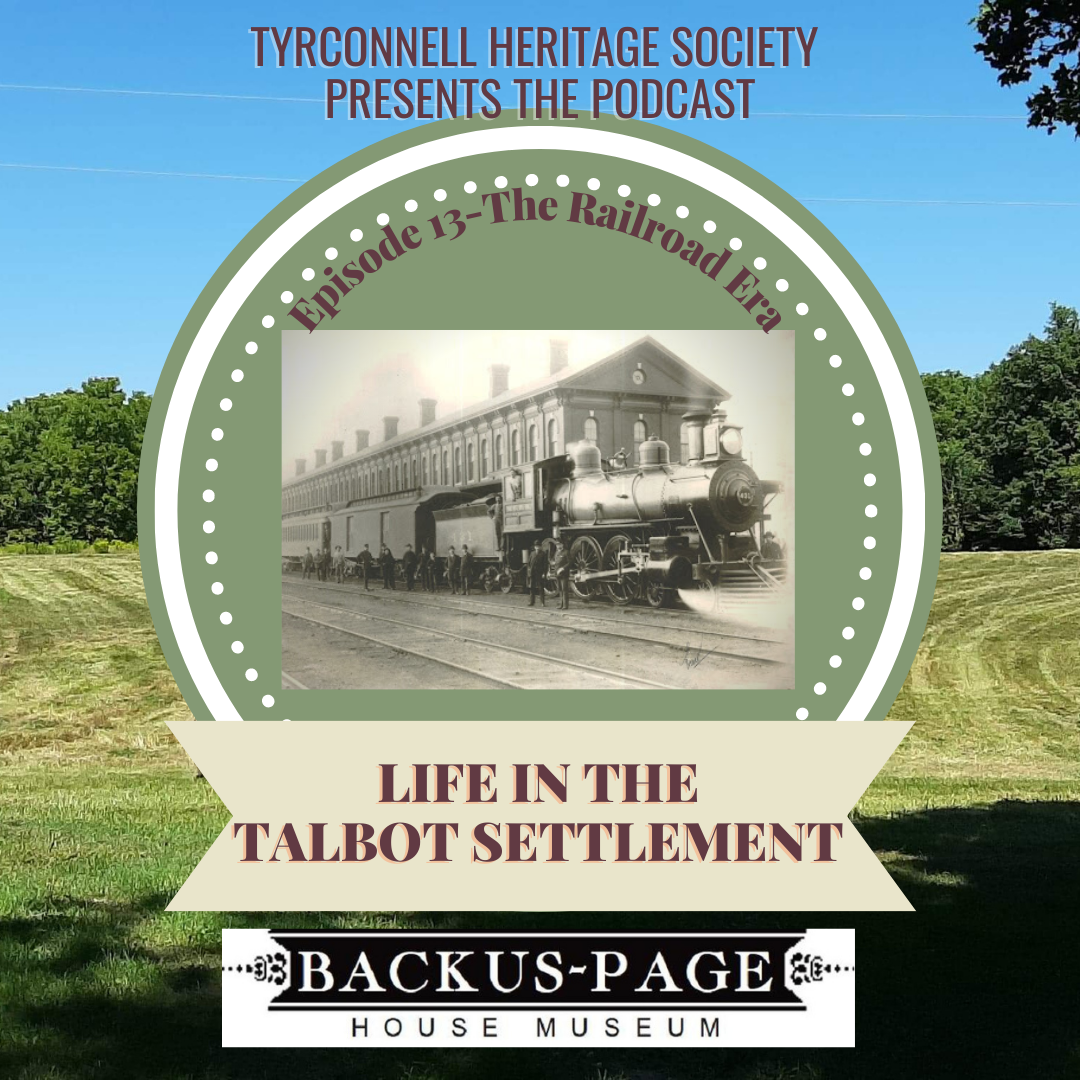 The Canadian Southern Railway Company was the first to put a track through Southern Ontario, from Windsor to Fort Erie, in 1872. They sold to New York City Railway in 1882, and they leased it to the Michigan Center Railroad. The Lake Erie and Detroit River Railroad opened in 1901, from Walkersville to St. Thomas. It curved to reach places like Kingsville, Leamington, Blenheim, Erieau, Ridgetown, Highgate, and West Lorne, which weren’t covered by the MCR. It was meant to go further, but for reasons unclear its progress was halted.

The railways exchanged hands often, multiple times because owners declared bankruptcy. That was how the Erie and Detroit Rail became part of the Flint and Pere Marquette Rail, and how Michigan Center was bought back by New York. Through all of their different names and owners, it was these two railroads that most impacted Dunwich and Aldborough. Some for better, some for worse, but for the towns we focus on today it was their origin story.

Rodney was hardly an idea when the Canadian Southern began construction. Their first ever train station was a modified box car, manned by one Charles Brown. The station that was later built on Stinson Street wasn’t much better. Early trains were wood burning, so wood for fuel was stocked at all stations; for Rodney this came in the form of Port Glasgow’s empty fish boxes piled on the station’s every side. There was also lumber, livestock, fish, baskets, and beans, all key exports crowding the platform. The trains were bulky, ugly, and dangerous. It was only in the 1900s that “electric block” systems would prevent train-on-train collisions. Gate men were placed at road crossings, but they weren’t enough. On January 1st, 1934, local youth Carman Evans, Georgina Munroe, Sarah Patterson, and Jean Stewart were hit by a train and killed while driving home from a New Year’s party. It was only after that tragedy that automated signals, called wig-wag signals, were installed.

It wasn’t just the railroad’s safety that grew over time. When the Stinson Street station burned down in 1884, business had grown enough that the new station could be made bigger and better. The Lake Erie and Detroit River Railroad was added in 1901, their station at the Furnival Road crossing. The MCR doubled their track a year later, a project that took over 600 men and 125 new trains, some now with dining cars. In summer months they sold excursion tickets to Toronto daily and to the Erieau pavilions on Friday nights. There would be up to 16 passenger trains per day per rail through Rodney with 20 cars each. Freight trains could easily have 100 cars. By 1904 trains from Niagara Falls to St. Thomas were travelling at world record speeds of 17 miles per hour!

Of all that trains brought, one of their most valued imports was the news. The commercial telegraph was introduced almost as soon as the trains, to cover Provincial and Federal elections. Imagine: voters gathered in the township hall, separated by political parties, chattering with excitement. Runners from the station dash to the hall with information. An elected official’s name is called, half of the room is an uproar of cheers, the other half awaits the next name in simmering disappointment. It was almost as exciting as a game of hockey!

West Lorne saw similar beginnings, although it was originally two towns created around the railroad; Bismarck and Lorne. They went from two houses to communities with stores and hotels. The Commercial Hotel, Odd Fellow’s Hall, and the Argyle Hotel popped up in the 1870s alongside stores for settlement necessities. The 1880s saw the rise of three mills, more stores, another hotel, and a Bending Factory. They built a town hall in 1888.

The first station was built in 1873 on what is now called Wellington Street. There were issues with its location even though it had been built close to the tracks, so they moved it to Graham Street on the modern Eerie Flooring property. It stood vacant after trains fell out of favour until 1974. The old Pere Marquette station remains an unused shell.

Bismarck was the name of a German Councillor at the time, and it was the condition of Squire Schleihauf, one of two big names in the West Lorne area, when he donated the land that it be named after him. The other big name was McKillop, a family who wanted to name the town after the Marquis of Lorne, Governor General of Canada 1878-1883. The name Lorne started slipping into other parts of the town, like the Lorne Mills, and when the two villages joined that was the name that took root.

To get water to the trains West Lorne originally pumped water from a well north of the station. It didn’t yield enough water for track tanks so they built a reservoir south of the town in 1901.

In March 1960 the Pere Marquette rail, here called Chesapeake and Ohio, had a devastating derailment near the Graham Road crossing. The train had a burnt journal on the 6th car. Travelling at 60mph bearings under the carriage also burnt out, knocking one of the tracks out of alignment and derailing the following cars. Thirty-two loaded cars thrown forward, broke open, and piled up to three cars deep. Contents poured out; there was a creek of molasses, shopping bags, shale bricks, flour, briquettes, and grain. Police and customs officials arrived swiftly to prevent looting of anything left intact. The wreck brought a lot of attention to railroads, and shockingly, brought business to the village.

Unfortunately, it wasn’t enough business to stop railroads from becoming obsolete. Passenger trains stopped coming through West Lorne between the 1930s and early 50s. The tracks were removed in 1997.

Two stations were put into the Dunwich township, the first in what would become Dutton. That area was swamp, meaning tracks needed extra attention, and a small hamlet budded up around the workers. What trains did stop there unloaded in the middle of Main Street and left. The people wanted a proper station, but they were ignored by the railway and opposed by Wallacetown and Tryconnel. Remember how I mentioned that there was a better and a worse? With Wallacetown and Tryconnel relying on water-shipped goods, they felt the railroad would impede on their business. Yet the Dutton people were stubborn, and with the hard work of David McLaws and Archibald John Leitch, corporations had to concede— by making the people pay and provide materials for the train station. The land was donated by Neil Patterson, and once the station was built, Dutton prospered.

Funnily enough, “Dutton” is not the name the settlers wanted. Half of them wanted to call it Lisgan, after the Governor General, the other half wanted to name it after George Bennett who distributed the land. A third party was brought in to decide, and the railroad company named Dutton after their chief engineer. The name was government approved in 1874 and attached to the post office, which was run by A.J Leitch. The main street is named after one of the first settlers, John Currie.

A sawmill had been established in the 1850s, and as the hamlet grew a grist mill was built by A. McEachern, which was turned into a flour mill by William Hollingshead and later sold to John E. Davies. In their time the mills produced so much that they often had too few train cars to carry it all. Lots for other businesses were cleared and sold from 1872 onward, most moving from Wallacetown, Tryconnel, and Iona. Hotels, doctors, druggists, lumber and grain merchants, shoemakers, implement dealers, and tailors all set up shop in Dutton. The Baptist church was the first religious organisation to come in 1877, with the Methodists following a year later. By 1879 Dutton had 26 open places of business and Angus McIntyre, the largest lumber exporter around, moved in and built a private bank. That building is now the Bobier Convalescent Home.

Dunwich’s other station was built near Iona, hence the name Iona Station, but the railway was too far out for the businesses to really benefit from it. Lots around the station were cleared in 1871, sold by 1873, but few could pay for new construction on top of that. This was a massive problem. The solution? Moving houses, literally! They put their homes on rolling logs and tied their horses to massive pulleys, moving little by little to their lots. The dry goods and grocery store of James J. Campbell is reported to have taken a week to move. The building rolled so slowly that he kept it open the whole time! It stayed open until 1978 and also housed the post office.

Other buildings of note include Angus Graham-McIntyre’s hotel. He married into the McIntyre family in 1873 and built on his mother-in-law’s property not long after. It was his for three years until he moved back to Dutton, and the hotel changed hands and names often afterwards. Eventually distance from the main road ruined the hotel business and so it was converted into a store. It was used as such until it was destroyed by a fire. There was also Ronald McDonald’s house, which might make you think of fast food but actually belonged to the town’s first blacksmith and football coach. It was used as a blacksmith’s shop for over 90 years. There was also a massive well and water tower built by the railroad; it was known as Iona Station’s most impressive feature. When it was first built, the water was pumped by hand, then by horse, and by the end it was powered by an engine. It caught on fire once, and for fear of damage to the telegraph lines, a swift decision was made to tear the tower down. Almost as swift was the decision to build another one, and it was up so fast you would hardly know it had ever been gone.

Perhaps the railroads’ greatest enemies were fire and progress. Stations, water towers, mills, and so much else that fell to the flames tore holes in the budget and cut off production lines. Trains to Rodney closed off from 1930 to 1950 because of this and further developed roads. When the 401 was built in 1973 Dutton faced exactly what had happened to Tyrconnell’s port. It was faster to ship things by road, and passengers grew harder and harder to come by. The last train through Dutton left in 2005, ending the age of the railroad for both townships.

Thank you for listening.  I’d like to suggest visiting the Elgin County Railway Museum in St. Thomas the railway city to immerse yourself in all this train related.   Come back next week as we delve into all the Talbot Settlement firsts, like the first person to have a cookstove in our community and more trivia.