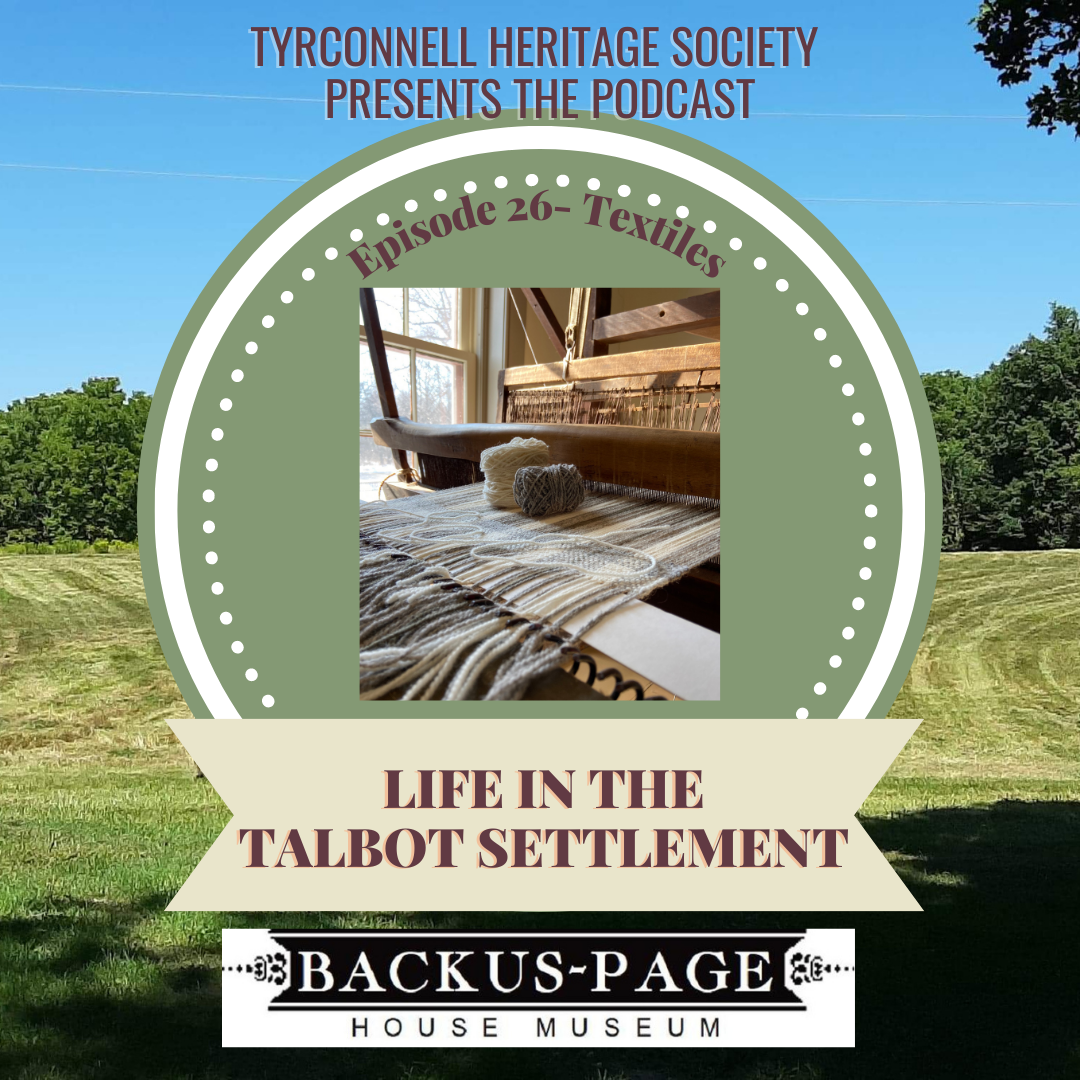 Welcome to the 26th episode of the Life in the Talbot Settlement Podcast, today we will be talking about the production of textiles Flax/linen and wool processing. Weaving, sewing, Spinning, rug hooking/punch needle, felting.  quilting bees.

The story behind the production of your polyester drapes has probably never crossed your mind. For our settlers, that was hardly the case. From the field to the clothes on their backs, quilts they slept under and rugs they walked on the women of the 1800’s were involved every step of the way.

There were two primary materials used, linen derived from flax, and wool fabric or flannel primarily from sheep’s wool. When the two fibers were combined the fabric was donned with the whimsical title of linsey woolsy.

Since the upper paleolithic era flax has been used for textiles and it has been found across most temperate regions for the last 5,000 years. Comparatively, in North America flax was a successful but new crop introduced by colonists.

The flax plants were manually pulled by the roots to harvest, this ensured the full length of the fibers maintained intact. They then underwent the process of retting; the plants would be placed in rows, and flipped weekly, allowing for even sun and moisture exposure on all sides of the plant. This process produced an enzyme that broke down the stem and fiber bond allowing the fibers to be separated. Retting took a full month or more so efforts could be made to speed the process by laying bundles in a shallow pond. This, however, produced a strong odor and slimy texture that was undesirable. From here, the outer straw would be cracked in a flax brake then scrutched to separate the brittle bark from the fibers. These fibers would be bunched and repeatedly run through hetchels, large combs with metal tines, to separate the fibers and pull out any short strands.

The short, lower grade fibers, called tow could be made into rope or spun into course yarn for sacks. The prime product would be soft, long, and blonde in colour, producing the likening of “flaxen hair.” This product known as the strick or line would be spun and woven into linen and used for bedsheets, table linens, undergarments, shirts, and summer dresses.

All farms would have had a flock of sheep, according to the 1842 agricultural Census, The Patterson’s had the most significant wool production with 84 sheep and a total of 313 yards of cloth from 350lbs of wool. Here on the Backus property during the same year there were 16 sheep and 40 yards/lbs produced with an increase to 40 sheep and 160lbs of wool fleece in 1861. The sheep would have been multipurpose breeds, used for both meat and fleece production.

Once raw wool was sheared from the sheep, it would be sorted, washed then carded, to remove any debris and align the fibers in a singular direction. The carded wool would be stacked in logs called batt, then stretched into a continuous fluffy sausage known as roving. This would then be spun into yarn. There are two prominent methods of spinning used by the settlers: Spinning wheels and drop spindles. The wheel was a faster way of production, winding and spinning the yarn onto a bobbin with the help of a continuous treadle powered flywheel. Drop spindles were easily portable but comparatively slow.

The yarns produced needed to be made into cloth, this was achieved by crocheting, knitting, felting, or weaving.

Weaving was performed using a loom. The loom would hold a series of longitudinal threads called the warp; these would be set close together at the desired width of the material in production. The lateral threads are known as the weft, meaning “that which is woven” in Old English. These are woven in an alternating over-under pattern between the warp at 90 degrees to create a plain weave cloth.

Alternating colours and differences in the weave pattern would change the look of the weave allowing for more complex designs.

To colour the cloth prior to 1850, natural sources were used including roots, flowers, fruits, insects, and minerals. To produce some basic colours women would not have to go far out of their way, common kitchen scraps such as red cabbage and onion skins produce colours such as pink and yellow, respectively. Other pigments such as purple and dark green, were rare, expensive, and difficult to produce resulting in their position as royal colours and a symbol of class. Midcentury, aniline dyes were introduced, this process of chemical dying produced vibrant colour-fast pigments that were widely and affordably available by the end of the century.

Woven cloth that used wool fiber would commonly undergo a felting process. This included agitation of the cloth in warm water to lightly mat the weave and weft together. When felted, the cloth could be cut without fear of fraying. This element was particularly useful when the fabric was cut to make clothing or other crafts such as rugs.

Although the exact origin of the craft is unknown, rug hooking became knowingly popular at the end of the 18th century in the Maritimes and spread across upper Canada during the 19th century as settlers developed their homes. It was considered a country craft, with manufactured carpets increasing in the cities midcentury at a hefty price.

Sewing scraps and retired clothing would be cut into strips then pulled with a rug hook through linen or burlap backing to form short loops. The tension of the backing and surrounding loops created a secure mat of neat loops. An alternative method was using a punchneedle, another traditional tool originating from the Maritimes for rug hooking. Regardless of method, the final product was identical and practical in the household.

The processing and production of all textiles was a labour intensive endeavor and the women of the community made a social event of it, lightening the work through community. The most notorious of which is quilting bees. A bee is another word for a social gathering or party, and groups of women would gather and work together on multiple quilts. This sped up the quilting production and allowed valuable social time that otherwise could not be afforded and would be spent working alone. Following the advent of the industrial revolution, the mid-19th century saw the availability of sewing machines which allowed for faster quilting and more complex designs that were previously only accessible to the upper class.

For the settler women there was always loom for more handicraft skills, your abilities were a social currency as weel as a practical tool. Its spoolish to not appreciate the beauty of every stitch and thread, the time and energy put into textiles made them worth their weight in wool. Fleece tune in next time to the life in the talbot settlement podcast for an episode 27 on Part 3 of a Grave Situation.