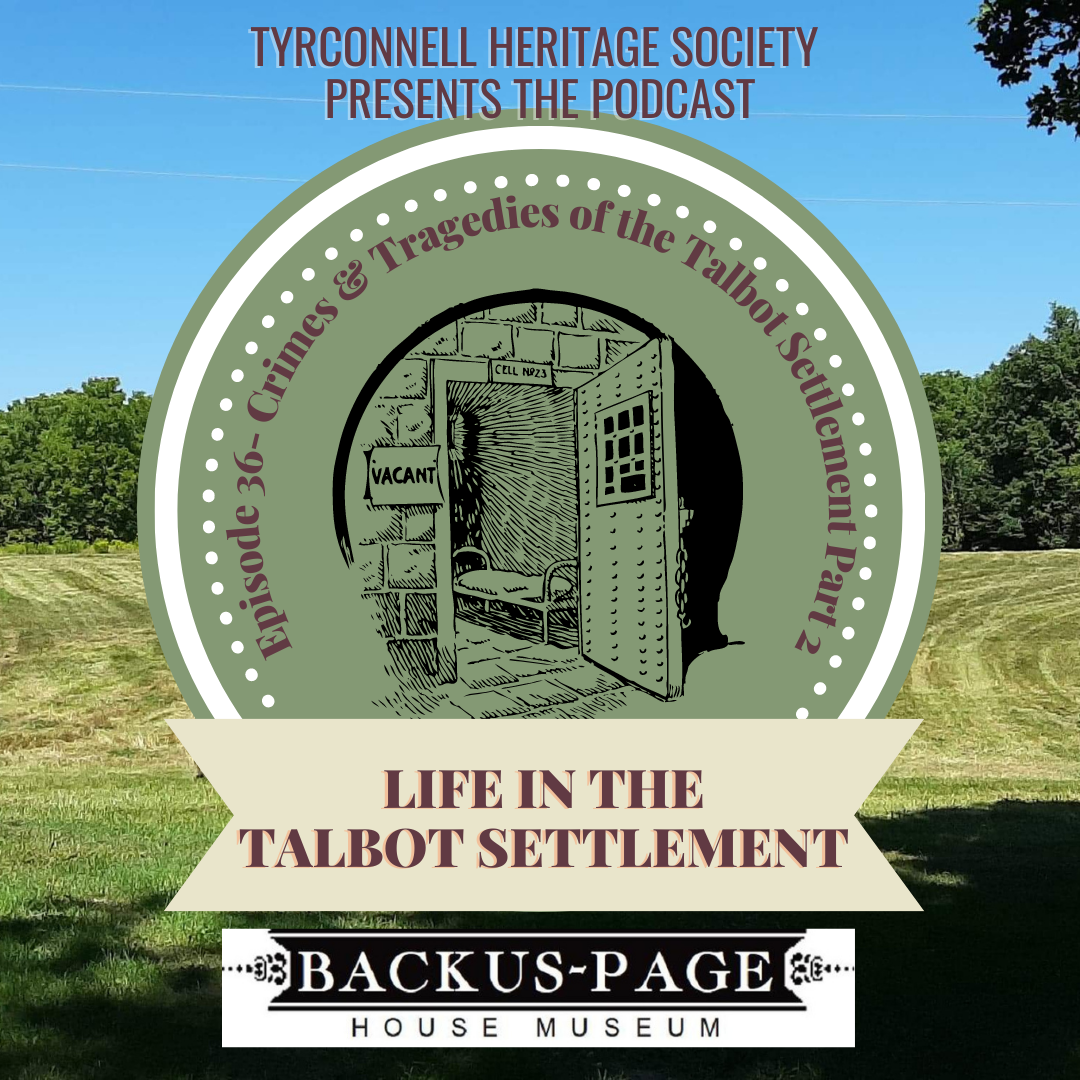 Before we begin, I’d like to give a warning that this episode talks about murders and accidents of the 1800s and early 1900s. If details of these events make you squeamish or unsettled, please feel free to skip this week’s episode and join us in two weeks for episode 37-Pests, Prey, & Predators of the Talbot Settlement.

Many words can be used to describe the Talbot Settlement. For many residents, it has been a quiet little haven. Safety is of little concern to those in the countryside or small towns. For many years, parents let their kids out the door after breakfast to roam the area and play amongst themselves. If the kids were back before dinner, the forest or streets would be open for exploration. This paints a very good picture of how safe and trusting we are in our area. Though our little community wasn’t always this way. In the early days of the settlement, life wasn’t always so quiet and safe. Today we look at some of the crimes and tragedies that have taken place in the Talbot Settlement. (DUN…DUN…DUN…)

I came across a news item in the 1864 St. Thomas Dispatch telling of the tragic death of Patrick O’Donnell. This event took place in Wardell Woods during a logging bee. The strange part about this story is that Mr. O’Donnell was warned by his wife who had a premonition that morning that something terrible was going to happen to him later. Like most men, he shrugged it off. In some cases, during logging bees, trees were felled in an unsystematic manner and accidents occurred often. On that day several men were injured. One tree struck Patrick O’Donnell, who died at midnight the same day. Mrs. O’Donnell was left with three sons, Patrick, Michael, and William. The O’Donnells lived in a log cabin west of John Curtis and west of the corners on land rented from Sarah Elliott Casey. After the death of her husband, Mrs. O’Donnell struggled to make a living, the family moved away from the settlement shortly after the accident. Nearly 30 years later, tragedy would strike again in Wardell Woods with the murder of William Hendershott. If you have yet to hear this story, you can find it in episode 28-Crimes & Tragedies Part one.

Death was very common in the early saw, and grist mills. Open line shafts, the lack of protective gear, and careless handling, all contributing to accidents. Many hands, fingers and lives were unfortunately lost in the early days. One incident happened in 1906 at the Thornwright grist mill. Mrs. Thornwright, wife of Charles Thornwright the proprietor, visited the mill while it was in operation. Her dress was caught in the open revolving shaft, and was drawn in and carried around, striking her head on the hoppers that stood at each end of the shaft. Before the mill could be stopped, part of her skull was torn from her body. Another incident occurred at the Whitehead sawmill on December 19, 1904. The steam boiler had run dry. To combat this, the water was replaced while the machinery was still hot. This resulted in 4 men dying at the scene and a 5th from the results of the accident the following year. Two of the men were killed by bricks that were flung into their heads. Another man was blown out about 30 feet from the fire hole beyond the west end of the mill. The nephew of the owner arrived on the scene right when the explosion occurred. He was hit by flying objects in the shoulder which ended up disabling his arm.

Due to the lack of safety precautions tragedies could strike at any moment while working. Some of the simplest of everyday farm tasks could become fatal. One Tuesday morning in July of 1890, a farmer in Chatham was victim to a runaway accident. John Stark, of 60 years, was operating a horse rake. The horses suddenly became frightened and took off. Stark was flung forward between the animals causing him to be dragged and trampled in the process. He was dragged a considerable distance. With every rotation of the wheels, part of the machinery struck him in the head and upper body. The horses were caught by neighbours who witnessed the accident. Mr. Stark suffered fatal injuries, his body bruised and cut.

In the 1895 paper of The Aylmer Sun, a column details the statistics of crime in the city of London. “The number of persons reported missing was 28,269. Fifteen thousand missing articles were returned to their owners, and 14,000 missing persons were restored to their friends. ‘There is no doubt that many of the remaining 14,000 came back of their own accord. But the bare statistical report of this great army of disappearances hides vast chapters of mystery. ‘The police buried 66 bodies which were never identified. Serious crime is decreasing. Felonies relating to property are a fraction over three in a thousand of the population, whereas ten years ago they were nearer five. Burglaries dropped from 637 to 509, and housebreakers chiefly flourish at the ‘expense of the poor, who have to leave their dwellings unoccupied for hours.”

One murder case written in the Aylmer Express January 11, 1894, describes the jury inquiring into the death of St. Thomas resident Roger Allin. They brought in the following verdict: “The said Roger Allin came to his death in 1893, from the effects of a wound in the neck. The said wound was inflicted with murderous intent by some person or persons to the jury unknown.” The Dutton Advance wrote about the incident on September 14th, 1893, stating “Mr. Roger Allen, who resides at 53 Edward Street, was proceeding along Wooward Avenue, in the east end, about 8 o’clock Monday evening, and when near the Grand Trunk crossing, he was struck from behind with a sandbag, or some similar weapon, in the hands of two thugs. He was knocked senseless, and the thieves then rifled his pockets, securing seven $10 American bills. The robbers made a thorough search of their victim’s clothes, cutting them to discover possible secret hiding places. Mr. Allen’s neck was cut, but he is not otherwise injured. The police have the matter in hand. “From the information we can gather using old newspaper scans from Elgin County Archives, the killer or killers were never found.

The next story is of a gruesome crime committed by a troubled man. After moving from England to London, Ontario, Henry Smith tried out many different careers including gardening, cattle farming and even operating a hotel. His last profession resulted in bankruptcy, in turn ruining his character. To sustain a lifestyle, he began growing and selling vegetables outside of his home on Regent Street. The emotional impact of his career failing lead to alcoholism and abuse. He began to have violent fits of rage. On one occasion February 18, 1890, during an outburst, Henry’s wife Lucy sought refuge in a neighbours house. Refusing to return home after Smith tracked her down, he then uttered the words that would later be used against him in court: “Come on over or I’ll break every bone in your body.” Later that very night at 8:30pm, Mr. Smith returned to his neighbours house, hands and clothes covered in blood. “Jim, come over, the missus has killed herself.” Henry stoically told young Jim Middleton. “She knocked herself about and killed herself.” When the Middleton parents saw the scene at the Smith home, police were notified immediately. Situated on a rocking chair, Lucy’s face was bruised and pummeled, almost all her hair torn out. It appeared that someone had tried to wash the blood off her face. Near the rocking chair a 2-foot iron bar lay bloodied and covered in hair. Upon the police’s arrival, Smith was immediately arrested. He denied all knowledge of Lucy’s death, claiming he was out at the stables. He told police “It was a bad job” and asked if they would look after his horses while he was gone. At trial, Henry had admitted to hitting her once with his fist. “I don’t know whether it was the fall on the stove or the blow that caused her death.” The case was opened and shut. Henry Smith was found guilty of murder and sentenced to the gallows on June 16th. Out of all of London and Middlesex County Henry was the only citizen to be executed using “modern” hanging methods. A rough frame was built, the hangman’s rope tied to a 350-pound weight was suspended by pulleys on the top beam. When released, the weight is to pull the prisoner off their feet, dislocating the neck. The London Free Press recalled the lynching “When the body was jerked up the crowd of 100 who had assembled to witness the execution gave an involuntary shudder. Many turned away sick, one of the number fainting.” This contraption, though it saved money and time, was never used in London Ontario again.

Since the moment Councilor Labatt asked the Mayor of London to proclaim the Queen’s birthday as a town holiday in 1850, the day of May 24th had been celebrated amongst the residents of the city for many years. In the beginning years of the holiday, the people of London celebrated with roasted ox, whiskey and ale. The day eventually became one of a quiet and pleasureful holiday. Residents would fill their day strolling in Spring Bank Park, visiting friends in the countryside, or at home. Such was the day in 1881, well the beginning of it. At 5pm the vessel Victoria had arrived at the picnic grounds carrying excursionists from further up the river. The Victoria was a small, double-decker stern wheeler, commanded by Captain Donald Rankin. No sooner had the boat halted, crowds of people leaped on board. In a matter of minutes around 600 men, women, and children had climbed aboard, packing themselves like sardines. The Victoria had a capacity of only 100, though the captain, crew and excursionists were all eager to get home for supper. The boat left the dock, creeping slowly down the Thames. The swells of the water crept on board the lower deck. The occupants moved from one side to the other keeping their feet dry. That is until 8 inches of water began to bury their side of the vessel. The captain, now aware of the danger, informed the passengers to be still. But his warning was ignored. By this time the boat had reached the expansion of the river approximately 1,300 feet west of the cove bridge. Suddenly a surge of water swept over the lower deck, turning the boat to its side, the deck floor now perpendicular. Supports began to bend and break away, the boiler crashing through the bulwarks bringing down the upper deck and awning with it. In an instant the people were in the water fighting for their life, attempting to flee from boiler steam, and getting crushed by the sinking boat. The Victoria sank immediately. The boat Princess Louise rushed to the scene but was too late to rescue. By 7pm that night, lifeless bodies were brought on board and arranged on the upper decks. The number of recovered bodies was so large that children and infants were placed onto adults. By 10pm, 153 bodies had been recovered, later, more would be found. At least 182 people lost their lives that day, the vast majority of them London citizens. The day of May 24th, 1881, had become one of Canadas worst marine disasters.

Thank you for listening to this week’s episode! We hope you enjoyed Crimes & Tragedies of the Talbot Settlement Part 2! Catch us next week for episode 37-Pests, Prey, & Predators.