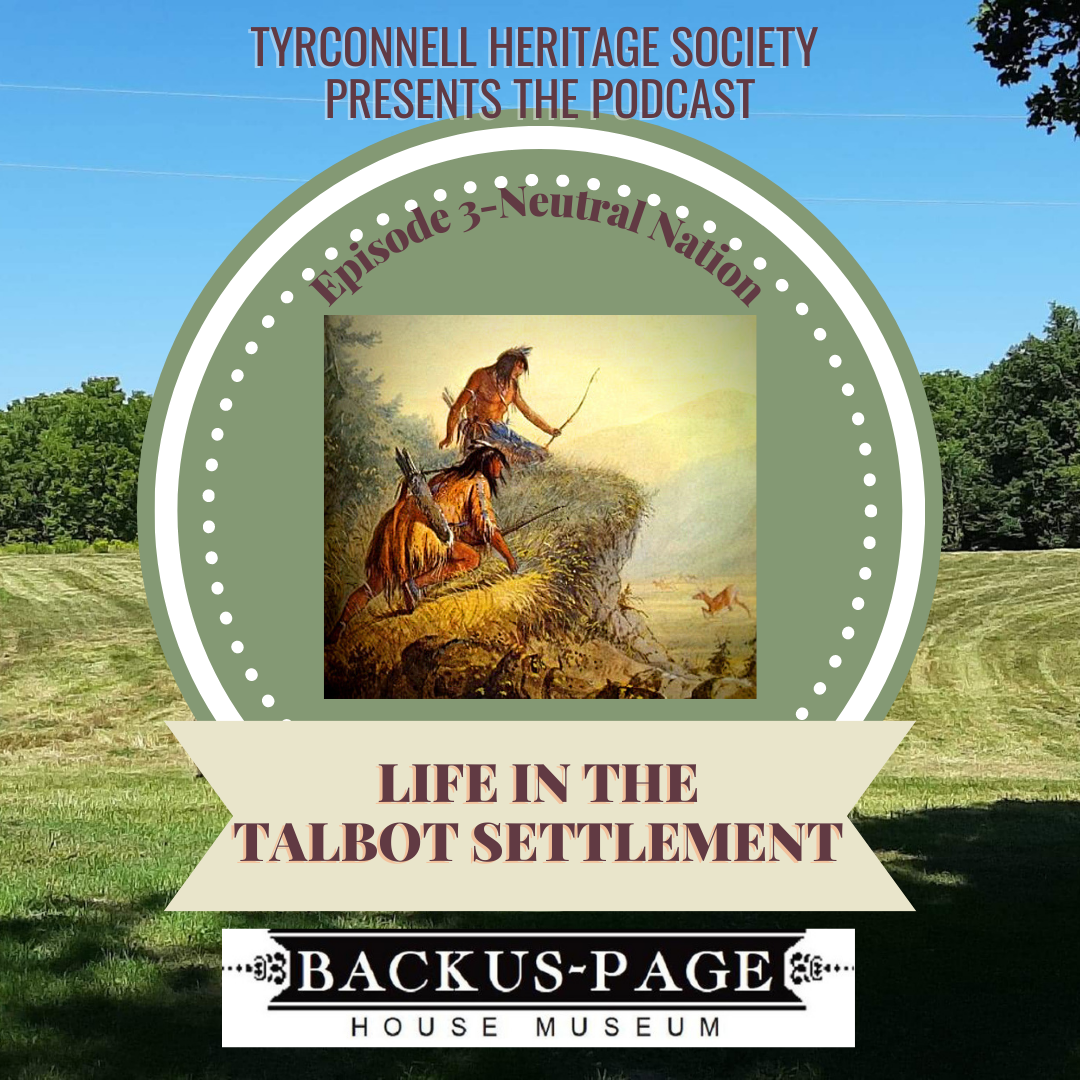 LISTEN TO THE PODCAST HERE

Before we begin todays episode about the Neutral Nation and Iroquois, indigenous people of our region in Southwestern Ontario, I’d like to acknowledge funding from the Department of Canadian Heritage and Tyrconnell Heritage Society, operators of Backus-Page House Museum.

We are not a voice for the indigenous people.  We are basing our information on archaeological and written historic evidence.   First nations oral traditions may differ and we are not the authority on the oral tradition but fully respect the narrative and encourage you to find out more.  Also forgive me if my pronunciation of words are incorrect, I’ve done my best.

The first man who applied the term “Neutral” to this nation was the French explorer, Samuel de Champlain or in French “la Nation neutre”. He used this term when finding out this nation was neutral in the war between the Hurons and the Iroquois.

To the Neutrals neighbors, the Hurons, they were known as “Attiwandarons” which meant, “those who speak a language slightly different from ours” and “people whose speech is awry.” Some believe that the Neutrals called themselves Chonnonton meaning “the people who tend or manage deer” while others think that the Chonnonton were one of the Neutral nations.  very few records of the Neutral language remain but it was likely an Iroquoian language like Huron.

The size of the population has a considerable variation in the estimates total. LeJeune stated in 1634 that they were more populous than the Hurons, whose total he placed at 30,000. In 1640-41, Lalemant gave a lower estimate of “about 40 villages or hamlets are counted therein.” While Champlain estimated 4000 warriors and Sagard estimated at 5,000-6,000. They are reported to be the largest Native American societies in the Eastern Woodlands during the early 1600s.

The main villages of the Neutrals lay between Brantford and Hamilton, Ontario but smaller villages were situated in what is now southern Ontario Canada, western New York, northeastern Ohio and southeastern Michigan, U.S.  -Neutral villages were situated on high, defensible ground between rivers/valleys or in a loop of a stream, presumably palisaded and contained long-houses. Most of these villages were within a 32km radius of what is now Hamilton Ontario. Their territory was established between Lake Ontario and the Grand River that stretches between Kitchener and Toronto. Many of the camps were along the Grand River in the Grand Valley region supplying them with an abundance of water.  -Champlain’s 1632 map places the Neutrals South of Lake Erie. Others later place them North of Lake Erie, from Lake Ontario to Lake Huron

The main occupation of the men was hunting and fishing. They greatly excelled in the hunting of stags, cows, wild cats, wolves, black beasts, beaver, and other animals which the skin and fur were valuable. The women tilled the soil to produce corn, squash, beans, and tobacco. The Neutrals were very skilled peacekeepers, warriors, traders, farmers, and business people. They brought the beginning of industry to the Niagara region.

-Sports and art were big characteristics of Neutral culture. Hockey and lacrosse were played. Sports matches were played between villages and would last for days. Archaeologist have discovered paintings of animals and humans on stones and wood in former Neutral villages. There was also evidence of body art or tattooing used for festivals and burial ceremonies

-They were a ranked society and were governed by chiefs whom they would elect.  These chiefs would decide on tribal affairs such as trade, war, government, feasts, ceremonies etc.

-During the 17th century, their confederacy developed into a chiefdom. At the top of the socio-political hierarchy was warrior-priest-chief Tsouharissen meaning “Child of the Sun”. Tsouharissen and his council united ~10 Indigenous groups within the Neutral nation. -The Neutral Confederacy was union both politically and culturally of the Iroquoian nations that lived in the Hamilton-Niagara area of southwestern Ontario and across the Niagara River into western New York state.   His authority over the Neutrals was unlike any other Northeastern Iroquoian nations at the time. In 1646, when Tsouharissen died, the chiefdom failed and the Seneca dispersed and destroyed the Neutral in the early 1650s.

-Neutrals encountered European explorers such as Etienne Brule and Samuel de Champlain in the early 1600s. They also encountered Christian missionaries at this time. In 1626, a French friar (Recollet friar) Joseph de la Roche Daillon spent several months studying the language and trying to convert the Neutrals to Christianity. Neutrals saw Daillon as a link to French traders and a way to bypass the Huron-Wendat in trade relations. Because of this he was well received by the people and provided personal protection by Tsouharissen. When the Huron-Wendat heard about Daillon and the Neutrals, fearing Daillon might introduce the Neutrals to their trading place, they spread false information declaring him a dangerous sorcerer who had killed some Huron-Wendat. They raised enough suspicion that the Neutrals became frightened of him. In 1627, Daillon left Neutral territory fearful of his life.

The Recollets soon realized that the conversion of Neutral Iroquoians would be an extremely difficult undertaking, requesting help from the “Society of Jesus” also known as the Jesuits. The first Jesuits arrived in 1625 and took a much different approach to conversion than the Recollets did. The Recollets attempted to entice the neutral peoples into living on established church property and converting them there. The Jesuits were much more active in seeking out neutral settlements and living among them, translating First Nations languages and documenting their expeditions incredibly well. One strategy that the Jesuits used was offering a shiny metal ring as a reward for whoever converted to Catholicism. Neutral culture revolved heavily around status symbols and decorations, in fact, decorative accessories had been a part of Neutral culture as early as 8500 BCE. Despite their attempts to adapt to First Nations culture, the Jesuits soon became associated with sickness due to the European pathogens they carried, and were seen by the First Nations groups as sorcerers that they called “black robes” in reference to the Jesuits’ attire.

-The Neutrals extracted flint (chert) to make arrowheads for war. They supplied both the Huron-Wendat and the Haudenosaunee (Seneca and Mohawk) tribes, who were constantly at war with each other in the 17th century, with flint weapons. They did this all while keeping peace and staying out of the conflict. Hence their name “Neutral”.

-Lalemant claimed “the men were taller, stronger, and better proportioned than the Hurons”

They were neutral between the Huron and 5 nations Iroquois but were always at war with those of the fire nation or Mascouten, which was more populous than the Neutral, Huron, and Iroquois combined.

-They were leaders of a group of 10 tribes of the Iroquois Nation. Other tribes included the Seneca, Mohawk, Oneida, Onondaga, Cayuga, Huron, Petun, Erie, and the Susquehannock.

– The tribe was governed by a “Queen of Peace” who they called “Jikonsaseh”. Her role was preserving the peace and neutrality as well as maintaining a separation between the Hurons in the West and the Iroquois in the East.

-In the 17th century the population declined from famine, intertribal wars, and diseases from the Europeans such as the smallpox epidemic.

-In the 1650s surviving Neutrals joined other Indigenous nations West and South of theirs.

-During the Iroquois wars the Neutrals fought against their former allies the Huron for control over resources. When the Huron nation was destroyed in 1649 the Neutrals took in the Huron refugees.

-After the Iroquois wars and their battle with Seneca, Neutrals scattered West and South of their lands, becoming assimilated with other Indigenous nations.

-This dispersion of the nation caused information about pre-contact of Neutral history to rely on Jesuit records and archaeological excavations.

-In July 1653, a group of 800 survivors of the Neutral nation were found living in Skenchioe (Tuscola County, Michigan).

-The last ever reference to them as a nation was in 1672 in French records.

-The largest pool of Neutral genes today would appear among the Six Nations Iroquois, Particularly the Seneca.

– Southwold Earthworks is a prehistoric Neutral village site located near the village of Iona in Southwold township, Elgin County, Ontario.  -Southwold Earthworks village consisted of at least 18 longhouse structures which varied from 12 m to 50 m in length and 5m to 6 m in width.  An archaeological survey in 1981 shows a hamlet from around the year 1400 within John E. Pearce Provincial Park, which pre-dates contact with the Europeans.

Colonel Alexander McKee, Deputy Agent of the British Indian Department, was authorized to negotiate the purchase of all the land along the north shore of Lake Erie from Kettle Creek west to the Detroit River.  This covered what we presently call the counties of Essex, Chatham-Kent, the western part of Elgin, and part of Middlesex.  The sale was concluded on May 19, 1790 for 1200 pounds paid to the first nations tribes in trade goods and the Treaty is called McKee Treaty, No. 2.

Information from: The Neutral Indians A Source Book by Gordon K. Wright

-Drilled holes into rocks to wear like necklaces, called “gorgets”

-Traded pottery with other nations (but mostly Huron-Wendat confed.) which we know by looking at the size/pattern of sherds

-Decorative shells (worn like gorgets) coming from Florida have been found in Ontario, suggesting trade with Native American groups

-Domesticated dogs around 800 BCE to 1000 CE (not 100% about the date, will update later) which we can tell because of the jaw bones found around lawson site

Thank you for listening to today’s episode about the Indigenous people of this region we have been calling the Talbot Settlement.

Life in the Talbot Settlement is a production of Tyrconnell Heritage Society, operators of Backus-Page House Museum, funded by the Department of Canadian Heritage.