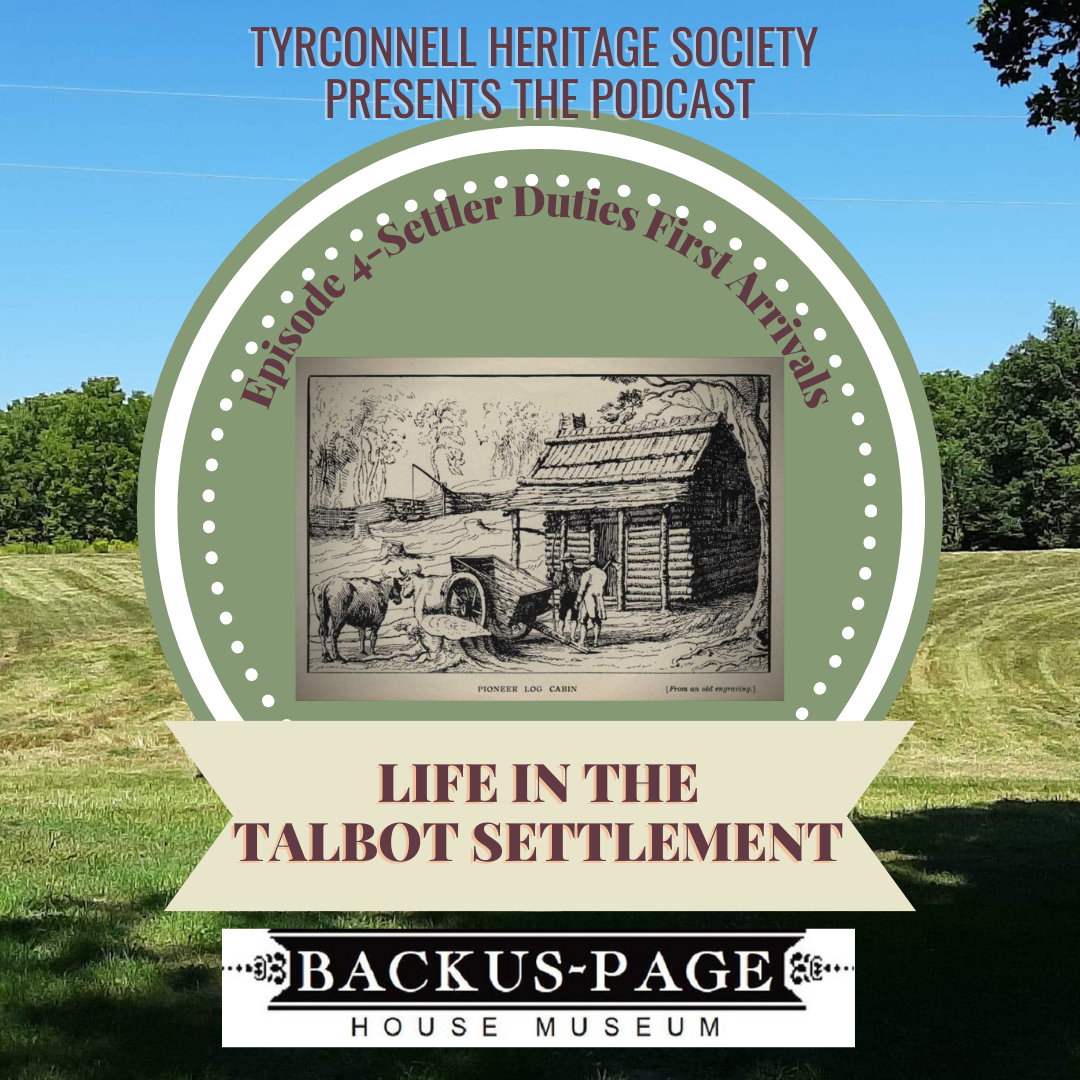 LISTEN TO THE PODCAST HERE

SHOW NOTES: From The Pioneer Farmer and Backwoodsman Volume 2 by Edwin C. Guillet “We have no landlord to come at Michaelmas to say ‘I want my rent!’  No poor rates to pay; we are in a free country.  It is a pretty thing to stand at one’s own door and see a hundred acres of land of his own.” – A letter of Robert Slade September 1835  Today I’ll be chatting about the first steps settlers would have had to take when arriving in the Talbot Settlement and what the settler’s duties were to get their land deed.

Before we begin I’d like to acknowledge funding from the Department of Canadian Heritage and Tyrconnell Heritage Society operators of Backus-Page House Museum.

In 1803, the year Talbot arrived, he had significant difficulty convincing people to settle, as the land was still undeveloped. Throughout 1804 and 1805 carpenters were busy building a house and barn. Then grist mills, for grinding wheat into flour and saw mills, for creating lumber for building, were constructed on Talbot Creek to improve the living conditions.  These employees and their families formed a VERY small community.

In 1809, possibly attracted by these new additions, people began to move into the Talbot settlement. Colonel Talbot wanted settlers to populate his land, but that didn’t mean he would accept just anybody. Colonel Talbot could reject any settler’s land request, and did so to those who he deemed to be insufficiently respectful, or whose beliefs conflicted with his own.

Imagine that you are an English, Irish, or Scottish person looking to make a new life in Upper Canada in the late 18th or early 19th centuries. For starters, you couldn’t just take a plane you would have to spend at least six weeks on a cramped, uncomfortable sailing ship. At worst, trips across the Atlantic could take up to fourteen weeks, if sailing conditions were poor.

You were required to bring all your own food to feed yourself and your family for the entire trip.  The only things the passage fee covered was your spot on the ship and water to drink.  You packed up your entire life and everything you would need to start out upon your arrival.  For example – clothing, tools, cooking and eating utensils, sewing or mending kit, a Bible and sentimental items if there was room.  All this assuming you owned such things already.

You most likely landed in Nova Scotia, then traveled up the St. Lawrence River to Quebec City.  You may have then travelled to Montreal by steamship, then on to Kingston by bateau and cart. Another boat took you across Lake Ontario to Queenston, then carts carried you to Fort Erie. From there you would travel by schooner across Lake Erie to Port Talbot to meet with Thomas Talbot.  All this travelling after Nova Scotia could add another 4 weeks onto the journey.

Some people living in the United States heard about the land in Upper Canada, so they would walk or take smaller boats around the edges of Lake Erie to Port Talbot.  Sailing directly across Lake Erie could be dangerous because of storms.

Once you got to Port Talbot, you would have to ask Colonel Talbot for permission to settle on the tract of land he was administrating.  Then your work really began because you have just moved to a very dense forest on the shores of Lake Erie.

In southwestern Ontario between 1802 and 1837, approximately one-half-million acres were entrusted to the control of Thomas Talbot. Talbot was a successful and remarkable settlement promoter. Large portions of the so-called “Talbot Tract” remained unimproved by 1837, when the Talbot agency was transferred to the Crown. By this date, however, Talbot had managed to settle approximately 6,000 families in the present-day counties of Norfolk, Elgin, Middlesex, Kent, and Essex. Talbot pencilled in the settlers’ names on his maps. Often, this information was subsequently erased or scratched out and replaced with the names of new residents. Often a date, probably the date of location, appears next to the settler’s name. Although settlers received their land patents from the Crown, Talbot reportedly exercised control over them, and could deny final deeds and patents if he so chose.

In order to permanently secure the land patent, certain “settlement duties” had to be met. These duties included:

• clear road allowance across the front of the lot

• clear and fence 5 acres for crops

A wood shanty or a log cabin could not be built by just one person, requiring the other settlers in the area to gather from miles around to assist in the construction.  For the very first families we assume they relied on all family members and perhaps Talbot’s employees for assistance.  Building corners from the rough-hewn logs was especially difficult, a well-cut corner being a source of pride for many local carpenters.

A barn would also have to be built before a settler could begin farming in earnest, a more difficult undertaking than the log cabin, but one the community was willing to undertake, as local barns would also serve as meeting places for the whole settlement.  The pioneers’ reliance on others built an incredibly strong sense of community among the early Talbot Settlers, further strengthened by their involvement with education.

After building shelter and a barn, early farmers would have had to clear some land in order to plant crops, the most common of which at the time was wheat.

In Ontario, where fields were covered in tree stumps and rocks, farmers couldn’t plough their land like we see Prairie settlers do.  Farmers would have had to rake the entire field by hand or get their work animals to pull the cut off top of a fallen tree, that they called a “rough drag”, over the soil. Either way, the difficult terrain made even the most basic farming extremely uninviting.

Removing stumps from a field was no easy task either, the roots of the felled tree would eventually rot away, but farmers could expect to wait around seven years before the stump could be removed.”  Basically you farmed around tree stumps for years and years.  You also walked, rode and steered wagons around tree stumps.

After 1817, the Talbot Road was extended and considered the best in all of Upper Canada.  Two main branches for stage coaches were the London to St. Thomas, Port Stanley and Port Talbot and the second from Fort Erie to Sandwich and on to Sarnia.  The first stages began operating in the 1820’s but were seldom better than an open wagon or sleigh.  These are NOT the stage coaches you see in movie Westerns.

“It was necessary to have a good road, and the settlement duties included clearing ten acres of land and one half the road itself in front of each lot, as well as 100 feet adjoining the road. It was also necessary that the Talbot Road should have no large blocks to obstruct settlement, and the Crown and Clergy Reserves were accordingly shifted to the back concessions. The settlers were in most cases poor and unable to pay survey and patent fees; therefore they should not be molested by the Toronto officials until it was entirely convenient to pay them; and lastly, no certificates for patent should issue except to persons who had erected a house 15 feet by 20 feet, and been actual settlers for five years. This prevented them from selling out to speculators, and induced continuous improvements.”

Situated between the lake and the ridge which forms its watershed, it was within convenient reach of excellent gravel on both sides. This natural advantage, and the Colonel’s policy, combined to make it an excellent highway; and it became an object lesson to the settlers on the back concessions, who vied with each other in improving their roads. The result is seen in the excellent highways which form a network over the county of Elgin”

In 1837 Mrs. Anna Jamieson visited Colonel Thomas Talbot and described the Talbot Road as the finest in the province.

Anna Jamieson went from Port Talbot to Chatham in a farmer’s cart pulled by two horses.  The bottom of the wagon had clean straw and both her seat and the driver’s made from slung straps.  The driver was a respectable settler (BOBIER) from the neighbourhood who charged twelve dollars for the two day journey.

Corduroy log roads made travel bumpy and uncomfortable.  Water and mud were issues and many a traveller had to assist drivers in getting their coach moving out of holes.  On bad roads you could travel 2 8/11 miles an hour.  Coaches would stop at inns to change horses, passengers to disembark or get on, and to get refreshments.

By 1842 a daily line of stages operated across the province, mostly due to mail delivery.  In the early 1850’s there was a complete trunk line from Quebec to Detroit intersected by many branches.  Stage coach proprietors had long term contracts with no competition in their area. “The covered coaches kept in the vicinity of the larger towns where the roads were better, and where it was worth an effort to ‘take in’ the unwary.”  Six people could sit inside, 3 to a bench, and another up front with the driver.  Baggage would be located at the back and light baggage on the roof similar to what you see in the movies.   Thirty to seventy five miles a day was the usual speed with long delays and inconveniences.    By the 1870’s stage coaches were being replaced by the railroads.

The settlers soon recognized that education was necessary if the Talbot Settlement was to become a successful and self-sufficient community. This being said, education was much more limited than it is today, with the focus being only on teaching the three “Rs”. Different sub-sections of the Talbot Settlement had different teachers, but generally school curriculum was taught in a prominent settler’s house, and featured very strict punishments for misbehavior.

All these challenging tasks are just some of the many ways Talbot Settlers had to prepare their land for permanent residence, for more information, feel free to check out our book “The Pioneer Days in Aldborough” that can be purchased online at www.backuspagehouse.ca

The acquisition of land in the Talbot Settlement was the least of early settlers’ worries during the early nineteenth century. Building proper housing, clearing land for farming, and building roads were all obstacles settlers had to overcome before establishing the settlement we have come to know and love.

Catch our next episode when I go in depth on the four Irish families that founded the community known as “Little Ireland” located on Lakeview Line between Port Talbot and Tyrconnell.