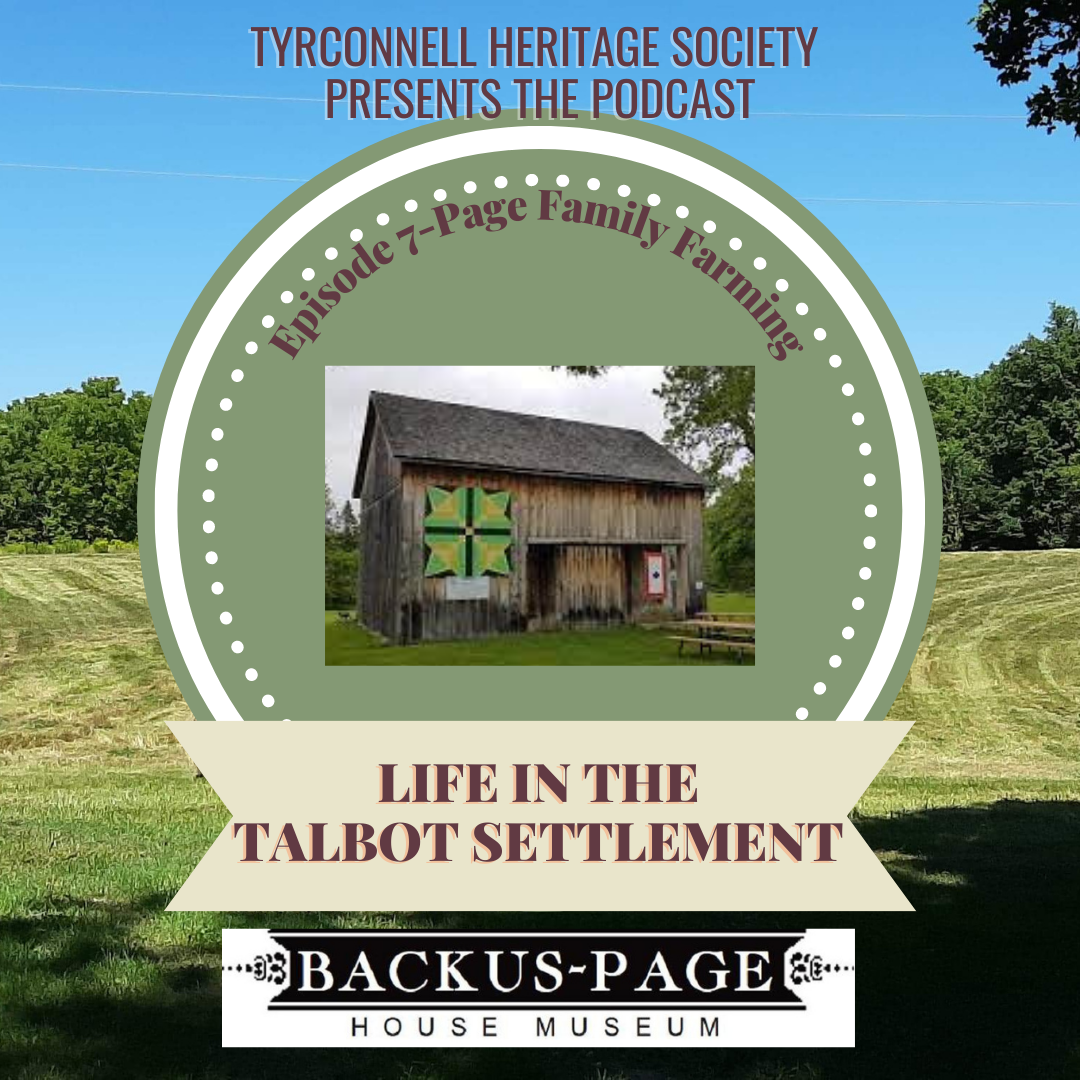 Listen to the podcast https://anchor.fm/lifeinthetalbotsettlement

Have you ever wondered who owned the Backus-Page House Museum before it became a museum? Or how they used to farm? Maybe you even want to know what kind of crops were grown on the property. Today you’ll hear all about the Page family and their life farming on Lakeview Line.

Those who have taken the guided tour of the Backus-Page House Museum may recall a lot about the Backus’, but not much about Morley or Grace Page and their children Bill and Iris who lend their last name to the museum.

The Pages were the first plush weavers in England and their plush, a type of textile which has a nap or pile similar to velvet used in royal courts, is still used at 10 Downing Street.

The Page family story relating to the Talbot Settlement, begins with an Englishman named Jonas Page, who was born in South Newington, Oxfordshire. He moved to Canada along with his wife Esther Hirons and their son William in 1842.  Jonas appealed to Colonel Talbot to be granted a plot of land. At first, Colonel Talbot refused, so the family settled at Five Stakes (now Talbotville).  After returning in 1845, the Pages were given a parcel of land on the lake road, now called Lakeview Line, two miles west of Tyrconnell.

Being very anxious to see the land he had purchased on the 9th concession in Dunwich, Jonas set out on foot west on Talbot Road, which is now Number 3 Highway/Talbot Line. After walking until mid-afternoon, he decided to turn south to reach Lake Erie. He went south about a mile and came upon a little clearing on top of a hill where a log cabin was built. In front of the log cabin he saw Job Curtis.

Mr. Curtis invited Mr. Page in and asked him to stay the night.  This was common practice amongst settlers as there were yet to be many hotels built and offering accommodations to strangers was just what you did then.  Jonas stayed the night and told Mr. Curtis of his plans. Job Curtis said he would go with Jonas and help him build his log cabin. After finishing the job, Jonas Page returned to Five Stakes until the spring. In the month of March, 1846, Jonas, his wife Esther, and son William, arrived by ex-sled to their new log cabin home on Concession 9, Dunwich Township.  This log cabin was built quite a way back from where the present home is, so it was quite near the lake.

At the time, Upper Canada’s primary export was still wheat, but unlike earlier decades, agriculture in what is now Ontario was beginning to diversify. In 1846, the same year Jonas Page moved his wife Esther and his son William into their newly built log cabin, the Corn Laws were repealed, removing British North America’s preferential treatment in the wheat markets. This made wheat prices less reliable and promoted trade of more diverse goods in American markets.  The repeal was considered a as blow to Canada as they were no longer getting preferential treatment with British markets and now had to compete with other countries like the United States.

After a few days at his new home, Jones decided to take a look around the heavily timbered property, when he stumbled upon a camp of six Indigenous people who were in the process of making maple syrup. They gave him his first taste of it, and from that moment he began preparing to make his own batch the next season.   Jonas Page decided to hollow out as many basswood troughs as he could in order to harvest his own. They were about the size of a large butter bowl and would hold twelve or fourteen quarts of sap. The tapping was done with a wide chisel driven into the tree, pulled out, and a thin piece of wood, about a foot long driven in. The sap ran out on the stick and dropped in the trough. The boiling was done in an iron kettle.

Years later, his grandson, Morley Page, former owner of the house that is now our museum, tapped the property’s maple trees each year to produce and sell syrup. This tradition is still common in Dutton Dunwich and surrounding areas today.

Jonas also added an ashery to his farm in 1862, which turned hardwood ashes into lye, potash, or pearlash.

A very successful fishery opened on his property in 1884 by the government.  Jonas was also a member of the Elgin bee keeper’s association, his many pursuits showing how diversified Ontario farming had become.

Jonas helped start the Tyrconnell Methodist Church in 1855.  He led the singing of the congregation.

One of their sons, Jonas Alfred Page first married Louise Braddon. Their daughter Edna Page who married into the McKillop family.

Jones A Page then married Dora Green and their children were Frances (stillborn), Morley (1900), Gladys (1903) and Herman Page (1905).  Jonas Alfred Page died January 15, 1939, and his younger son, James Herman Page carried on the farming operation until his death on October 28, 1947 leaving teenage sons Donald Herman Page and his younger brother, John Lawrence Page, who farmed for a short period.

Sometime about 1853 a frame house was built. This was quite a way back from the road. In the 1907 this house was moved about 500 yards closer to the road. About this time Jonas Page added more acres to his farm.  This is the present day house still standing and owned by John Lawrence Page, known as Jack, great grandson of the first Jonas Page.

In 1925, Jonas Alfred Page purchased the property that has since become the Backus-Page House Museum directly from the crown for $1000 to start his son Morley and new wife Grace Hoskins out in farming. The property had been sold by Andrew Storey Backus in 1923 to an imperial army veteran named Robert Kennedy, who claimed the land through the soldier’s settlement act of 1919. The Kennedy’s never lived in the house and it reverted back to the Crown.

Morley would have had a difficult time farming in the following years, as the short lived prosperity of the ‘20s soon gave way to the Great Depression. While not subjected to the droughts of the prairies, Ontario farmers were still severely impacted by the Great Depression, being unable to sell their excess goods. Bring on a farm though, you had food and could help family and friends living in towns by providing them with food.  By the time the Second World War ended the Great Depression, the nature of farming had changed drastically.

In the 1940s, Morley would have had access to machines like the two row planter, which could plant up to 15 acres of corn if the team of horses were changed frequently. Mowers and hay loaders soon gave way to the chopped hay harvester, which made the process of “haying” much easier.

Grain Binders could be used to harvest oats, wheat, or barley, and the threshing separator separated the grain from the straw. Piling straw was no easy task, and it often took eight to ten men to complete. The owner of the threshing separator would have to get their neighbors to come over and help them with the chore, an event which became known as the “threshing bee”.

In the early 1940s, the first combines made their appearance, the lucky few who owned them being able to thresh grain as they travelled up and down the fields. After collecting the grain, farmers would store it in jute bags that would then be transported to the granary of choice for more long term storage.

In 1955, Morley, his son Bill and nephews Don and Jack started the Page Quartet.  Bill was baritone, Don sang tenor, Jack sang lead and Morley was bass.  They sang acapella and could be heard every Sunday night for one season on CFPL radio London.  Their specialty was spiritual gospel music.  They recorded a record that later became an album with Frank McGee on piano.  The quartet were quite popular in southwestern Ontario.

After roughly forty years of living on the farm, Morley and Grace Page sold it to the Ministry of Natural Resources in 1968, though they continued to live on the property until the summer of 1976. This parcel of land was added to John E. Pearce Provincial Park.  The Backus-Page House Museum is currently being leased to the Tyrconnell Heritage Society, though the Ministry of Natural Resources still retains ownership of the property.

The Page family has a long and rich history in the surrounding area, both at the farm which later became the Backus-Page House Museum, and on their original property granted to them by Colonel Talbot.

Sneak peak of next week’s episode

Tune in next week when I answer all the questions you’ve submitted about Life in the Talbot Settlement so far.  If you have a question you can leave a comment on any of our social media or send an email to info@backuspagehouse.ca