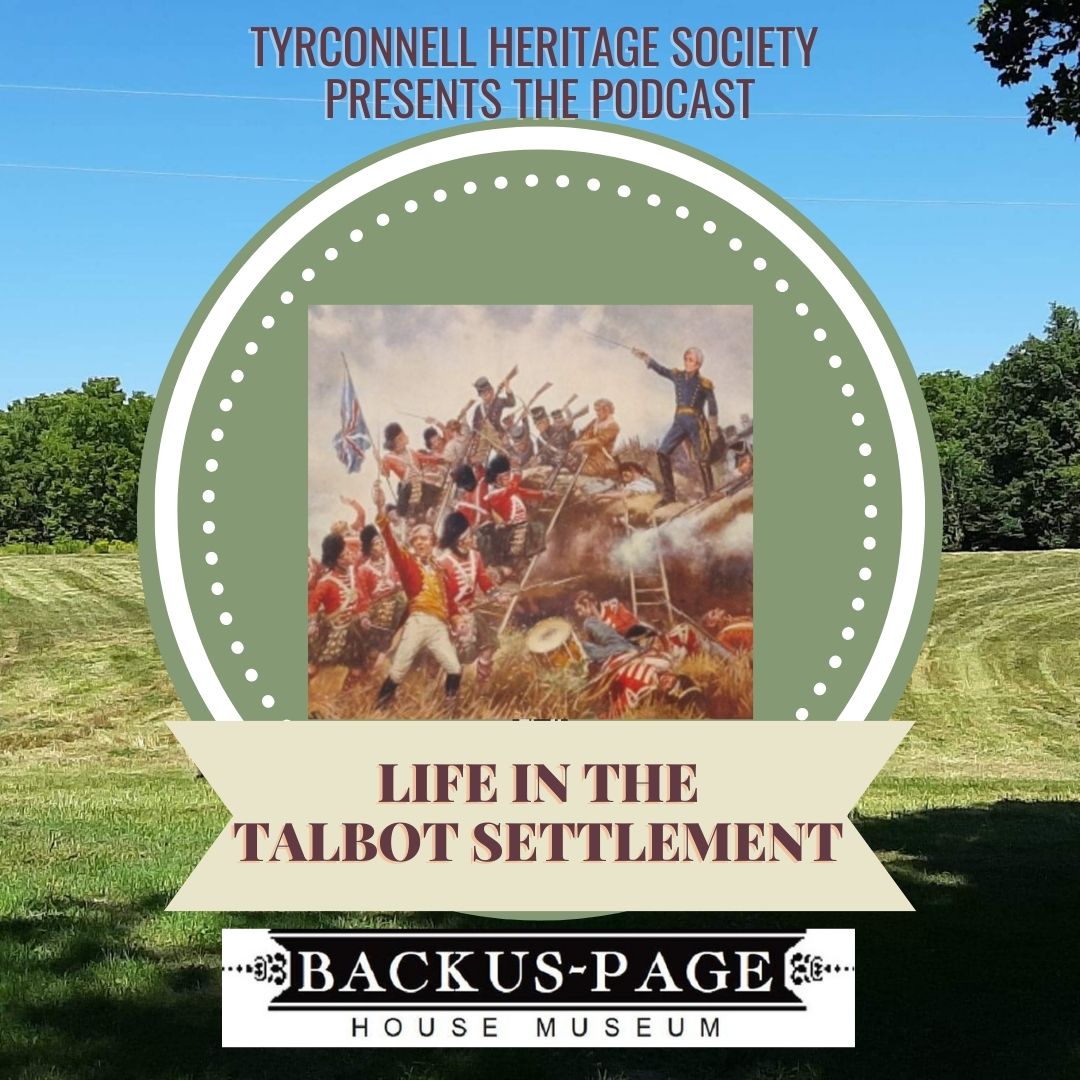 Today, our focus will be the War of 1812 and its impact on the Talbot Settlement. In addition to surviving in a new world, the early settlers to Upper Canada found themselves faced with war. The United States declared war on Great Britain, and while the major battles in Upper Canada took place closer to the Niagara Escarpment and area, the effects were felt into the Talbot Settlement. Even though there were battles from Upper and Lower Canada, the east coast of the United States, and even naval engagements, we will be focusing on the battles and their effect on the people of central and western Elgin County.

On June 18, 1812, the United States Congress declared war on the Kingdom of Great Britain. The reasons are still being debated by historians, and there is agreement that there is no clear cause but many small issues contributed to the friction between the countries.

At that time, Britain was still at war with the French under command of Napoleon Bonapart. The British navy was in need of fighting men and discovered that many of their sailors had deserted to America and been hired on merchant ships. Ships of the British navy often stopped these merchant ships and removed men who they claimed were deserters. This impressment was rampant in the years prior to the outbreak of the war. It also led to a shortage of experienced sailors, and to complaints that the British were interfering with American trading ships.

In return, the United States, still a new nation working to expand its territory, looked north to Upper Canada. The area was already settled with towns and cities, a good portion of the population was English speaking, and trade was already established. With the British army involved with defending its home territory from the threat of invasion by the French and their allies, the U.S. government looked to this largely undefended area, assuming that it would be easily taken. While the other choice was to expand west, there was friction with the Indigenous people. Led and organized by Tecumseh and Tenskwatawa, they were working to create their own confederation. Rumours also led to the belief by the American government that General Isaac Brock, commander of Upper Canada, was supporting this effort to prevent westward expansion.

Fighting alongside the military units of the U.S. and Britain were warriors of many of the Indigenous bands. Just prior to the beginning of the war, the British made a promise of permanent land to Tecumseh and his followers. To repay this promise, many of the men agreed to fight on the side of the British. A list of bands who fought was published in 2013 and included band names as found in journals and army lists of the time. Among them were the Chippewa, Mississauga, Delaware, Shawnee, Wyandot, Huron, and Six Nations Confederation which consisted of the Mohawk, Seneca, Oneida, Cayuga, Onondaga, and Tuscarora.

Neither country was ready for open conflict. The British were involved in Europe and many of their smaller military units were assigned to North America. Most of these troops were not well supplied and were required to obtain food and equipment from local farmers and storekeepers. The American forces suffered under a general disinterest in a northward invasion. As recorded by Thomas Jefferson, “The acquisition of Canada this year, as far as the neighbourhood of Quebec, will be a mere matter of marching, and will give us experience for the attack of Halifax the next, and the final expulsion of England from the American continent.”

Active battle began in August of 1812. US General William Hull led an invasion from Detroit. His forces were pushed back by forces led by Brock and Tecumseh. This led to small raids by the British commanded by General Henry Procter and Tecumseh along the northwestern border. In the northeast, American forces under General Stephen van Rensselaer attacked Queenston in October, and again, the British were able to repel the invading army. During that time, General Brock had appointed Thomas Talbot as Colonel of the Middlesex Militia to supervise the regiment of the London and Western Districts. After the American revolution, and in the years after, many Americans had moved north into Canada, choosing to remain British instead of being part of the new United States. Talbot was also assigned to secure the loyalty of those former Americans. Talbot  raised a force of about 350 men (Middlesex, Norfolk and Oxford Militia) to join Brock’s army.

The tide began to turn in 1813 with an American naval victory in the Battle of Lake Erie, This victory off the coast of Put-in-Bay in September gave the U.S. control of the lake which was retained for the remainder of the war. This battle opened the way for newly appointed US Major General William Henry Harrison (future President of the USA) to retake Detroit and defeat Proctor and Tecumseh at the Battle of the Thames in October. During the battle, Tecumseh was killed and talk of a confederation was ended as well as the British – Indigenous alliance. The U.S. forces invading in the Niagara Peninsula razed the village of Newark (now named Niagara-on-the-Lake), and this action was met with retaliation by General Gordon Drummond to attack and leave the city of Buffalo in ruins.

March of 1814 brought more intense fighting along the Niagara River. A flotilla of sixteen American ships under Commodore Isaac Chauncey attacked and burned the city of York (now Toronto) in April. The U.S. forces were then able to seige and take Fort Erie. This led to the defeat of General Phineas Riall by Major General Winfield Scott at the Battle of Chippewa in July. The war’s deadliest engagement occurred at the Battle of Lundy’s Lane late in July with more than 800 casualties and forced the retreat of Col. Jacob Brown to Fort Erie. This battle ended the American advance into Upper Canada in the Niagara area.

Early 1814 also brought a push by the American forces through Detroit to destroy and raid Upper Canada.  The centre of control was the farm of Col. Talbot in Dunwich Township and the community of mills, shops, and farms. The area became a prime target, and in February a group of Americans under Captain Holms marched toward Port Talbot. They were turned back because of a combination of bad roads and resistance from Talbot’s militia. In March, the defeat of the British at the Battle of Longwoods near Wardsville left the western area open to raiding American units.

When spring arrived, the American raiding units took to horseback. Their intent was to capture Colonel Talbot and break up his militia unit, and to destroy the mills which supplied food to his settler families. Despite several close calls, Talbot was never captured, however many of the mills were burnt and the lack of food caused many people to leave their homes to the incoming raiders. These raids continued throughout the summer.  Our next podcast will cover these raids in more detail, and it will also feature information of men from our area who served.

With the defeat of Napoleon, Britain was able to send sizable and experienced forces to North America and these soldiers now received supplies and support. This increase of forces led to the capture of Washington DC in August and the burning of the White House, as well as damage to other buildings. This attack was in retaliation for the destruction of York, now known as Toronto, the previous year.

With the loss of more lives and property, talks began in late August in the city of Trent in what is now Belgium.  Americans abandoned demands about ending impressment (the end of the European war meant its cessation), and the British dropped attempts to change the

Canadian boundary and establish an Indigenous barrier state in the Northwest. The representatives signed a treaty on December 24, 1814. Based on the status quo antebellum (the situation before the war), the Treaty of Ghent did not resolve the issues that had caused the war. At that point Britain was too weary to fight for a win, and the U.S. government deemed not losing the war a tolerable substitute for victory. Nevertheless, many Americans became convinced that they had won the contest. On paper, it was as if the war had never been fought.  Many historians today agree that there was no win or loss for either side, with the real losers being the Indigenous people in the Northern U.S. and Upper Canada due their continued mistreatment by both governments.

Thank you for listening to this week’s episode on the War of 1812 and the Talbot Settlement.  A special thanks to Beth and John Goldsworthy for compiling the research for today’s episode.

Tune in next week to hear more about the raiding parties, Talbot’s escapes, prisoners of war and the impact of the war on the Talbot Settlement.