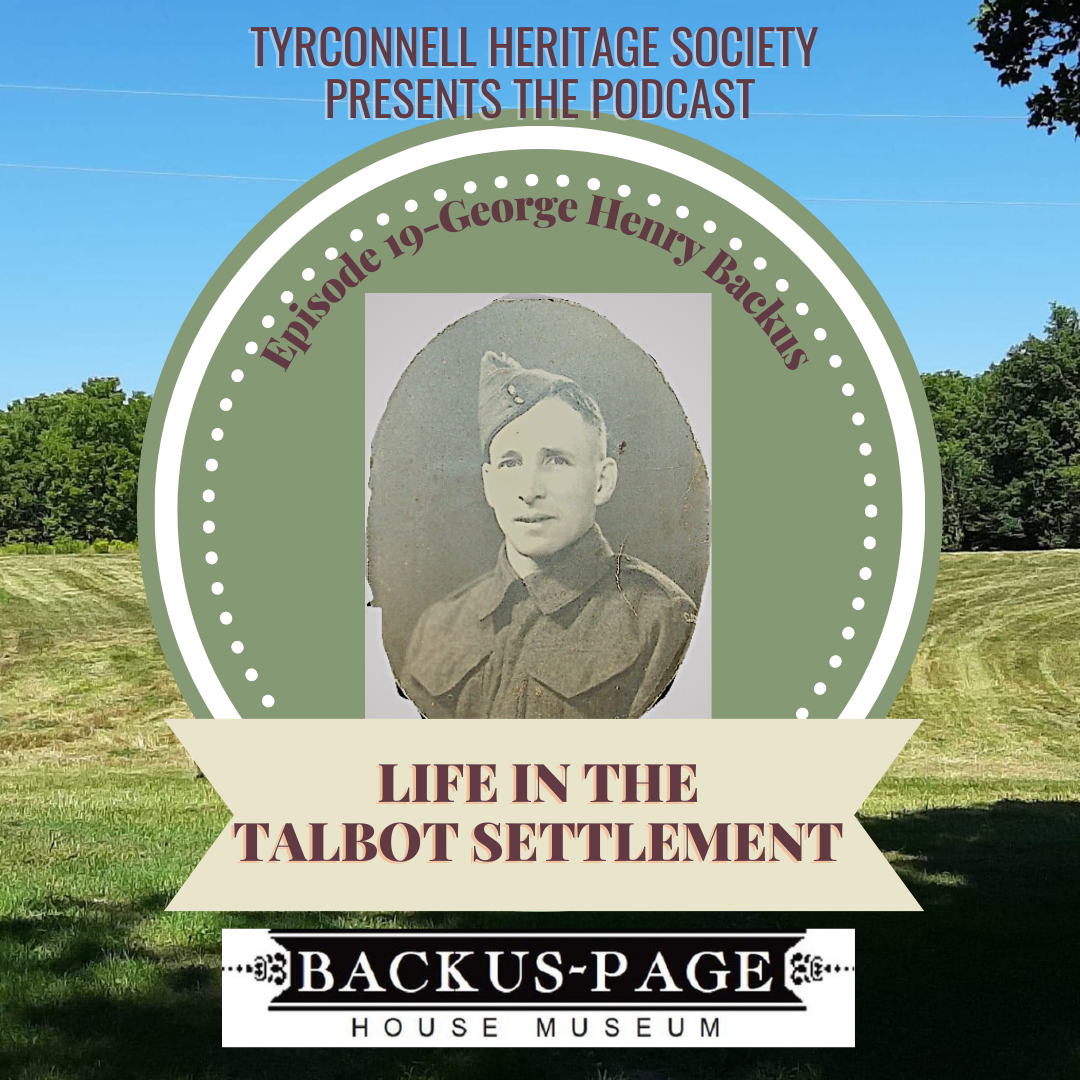 The information in this podcast is compiled from old documents, letters, and telegrams kept and labelled by Ruth Gilbert, foster sister of George Henry Backus.

George Henry Backus, also known as Gordon Gilbert by his foster family, was born December 15, 1907, to Frederick Henry Backus and his wife, Sarah Jane Thayer in Dunwich Township. George was the youngest of 6 children. Two girls and four boys. After being sick from December 25th of 1909 to February 10th, 1910, with Otitis Media (an infection of the middle ear) his mother Sarah sadly passed away when the infection caused septicemia. Sarah lived 2 weeks with the blood poisoning, before passing away at Lot 13 Concession 9 of Dunwich. Not too long after, Frederick, George Henrys dad passed from Pneumonia on November 17th, 1919. George was 12 years old at the time. Genealogists believe after his mother’s death all the Backus children were fostered by local friends and family members. George Henry Backus was taken in by George and Hattie Gilbert and their foster daughter Ruth. For the rest of George Henrys upbringing, he lived on the Gilberts farm called Broadview Farm near highway #3 west of Wallacetown. The family gave him a new name and referred to him as Gordon Gilbert. George attended school at S.S. No.1 Aldborough/Dunwich Township.

October 5, 1942, at the age of 35, George enlisted with the Elgin Regiment at No.1 District Depot, before this he was a farmer. George trained first at Wolseley Barracks, in London Ontario. On the same day a medical examination was done. George had no serious physical or psychological ailments besides a slight bowel problem called Colitis. The medical exam stated George was 5 feet 2 ¾ inches and 122 pounds. This is small for a soldier, taking his age into consideration as well, at this point in the war the army was slowly starting to wave some enlisting requirements. From there George moved around quite frequently. By November of 1942, he moved to Bennet Barrack in Listowel, then in December to Camp Borden on New Year’s Eve. April 18th to May 2nd, 1942, he was granted a leave of absence and went home to Wallacetown for a visit. By August 22nd, 1943, George made his way up to Fort Edward Barracks, Windsor, Nova Scotia. After training in Canada for about 12 months, he was sent overseas to England on September 28th, 1943. A telegram sent September 28th, 1943, reads: “To Mrs. Geo. W. Gilberts, all well and safe love to all the family am well and fit. G. Backus.” From the 6th to the thirteenth of December 1943 George had made a visit to Edinborough on furlough.

What you are about to hear is a speech given at a going away party for Gordon Gilbert November 21st, 1942.

To-night we your friends are gathered here to honor you Private George Backus, as another representative of our community to leave for active service. Amongst us you have always been a good and pleasant worker so we are certain that your new occupation will be well learned. But your new field is one that honors not only you but also the community from which you come. For you are one of those fine examples of our youth who has volunteered to go over there and help finish the job, as Winston Churchill has said. When we consider how you so honor us by your action and when we consider our pleasant association with you, which must now cease, we feel that humble though it maybe we must show our appreciation. And so, we offer you this gift. With it go our wish for God speed and our prayer that Heaven may protect you.

Signed on behalf of friends and neighbours”

A handwritten note lists the names of each donor and the total amount of money gifted. 64 people in the community donated, the total amounted to $28.00. Nowadays that would amount to approximately $471.21.

Let’s talk about a brief history of George’s Regiment. The Elgin Regiment existed before the Confederation of Canada, their origins tracing back to 1866 when the Militia Act officially created the 25th, Elgin, Battalion of Infantry from five local militia companies. In March of 1844, the regiment was re-designated from the 25th Canadian Tank Delivery Regiment to the 25th Armored Delivery Regiment also known as “The Elgin’s”. They held this designation until the end of the war in 1945. The Elgin’s were an army level unit tasked to serve all other units utilizing their skills and knowledge of the bigger picture of the vital role of the armored regiments. Their job was to retrieve tanks and equipment, service them and forward them back to front lines in good conditions. They held this role until the end of the war. The front and rear squadrons of The Elgin’s were obligated to deal with the distances that were involved in servicing and replacing equipment in the fronts of Italy and Northwest Europe.

“Armored Delivery Regiment helped to liberate the little town of Willebroek, Belgium. He (George) stayed over the little jewelry shop (with Magda Polspoel’s aunt and uncle the Van Lampenhouts, who lived in an apartment there) on his last sent leave before going back to the front lines. It was during this journey that he was accidentally drowned. Magda while under German occupation worked for the Belgian underground. She wrote a letter telling of how Georges leaving courageously for the front lines”. At this point Belgium had been under German occupation since May 28th, 1940. This lasted until Western allies liberated Belgium September 1944 and February 1945. The first major city in Belgium territory to be freed was Mons. Liberated by the American 3rd Armoured Division, September 2nd, 1944. The rest of the country was liberated in the days following. This is commemorated annually in many towns. Canadian troops participate in a commemorative march called the Nijmegen Marches held in the Netherlands. The marches combine a test of physical fitness and teamwork in which participants must march more than 160km in four days while carrying a standard military backpack weighing (at least) 22 pounds. Canadian troops have participated in this event since 1952 and continue to annually honor those who served and liberated the Netherlands.

In an air mail letter dated June 11, 1944, George describes the weather, “Dear folks – You have had quite a bit of wet weather at home this spring, the same as we have had here which does not feel so nice, our clothes get damp and cold. I was out to see Dad Richardson a week ago, and he was complaining about his garden being too dry, it was but expect it will be different now.”  It was on a rainy day like this described here by Gordon, in which his life would sadly come to an end nearly 6 months later.

18895 Minister of National Defense deeply regrets to inform you A104765 Trooper George Henry Backus officially reported died accidentally nineteenth November 1944 as result of drowning stop if any further information becomes available it will be forwarded as soon as received stop to prevent possible aid to our enemies do not divulge date of casualty or name of unit.

A-104765 Trooper George Henry Backus died November 19, 1944, in a town in the Netherlands no bigger than Wallacetown. This clipping from a newspaper- the exact newspaper is unclear- states Gilbert “stayed in a school in Willibrook Belgium when he mistook a canal for a wet road and drowned at 36 years of age.” George Henry accidentally drowned and passed away in the Quid Williams Canal in Holland. His comrade Ed McCallum searched for Gordon and found his footprints in the mud. He was buried temporarily in “0s” Holland, until after the war where he was re-buried in Nijmegen Canadian Cemetery Groesbeek, Holland. A letter addressed to Mabel Backus reads “Information has just been received from overseas that the remains of your brother, A104765 Trooper George Henry Backus, have been carefully exhumed from the original place of interment and reverently reburied in grave 3, row A, plot 20 of Nijmegen Canadian Military Cemetery—This is a recognized military burial ground and will receive care and maintenance in perpetuity. A memorial service was held at St. Peter’s Anglican Church in Tyrconnell one Sunday morning for Pte. G. H. Backus. Friends, family, and community members gathered to mourn the great loss. Rev. C. O. Pherrill conducted the service. Bugler Robt. Gray, of Rodney, sounded “The Last Post” and ”Reveille.”

What you’re about to listen to is a sympathy card sent to the Gilbert family by Gordons elementary school teacher.

Words can not fully express my sympathy for you in your loss of Gordon whom you hath loved so much. In your sorrow you have the comfort of knowing that you gave him such loving care and made his life happy while he was with you. I feel helpless in such an hour, but I want you to know my prayers and thoughts are for you and with you.

This episode was made possible and written with the fonds by Ruth Gilbert who thoughtfully donated all letters, notes, newspaper clippings, and photos to Backus-Page House Museum. We are grateful to tell this local Veterans story and hope you learned something new. Join us next Wednesday for the 20th episode in the series.