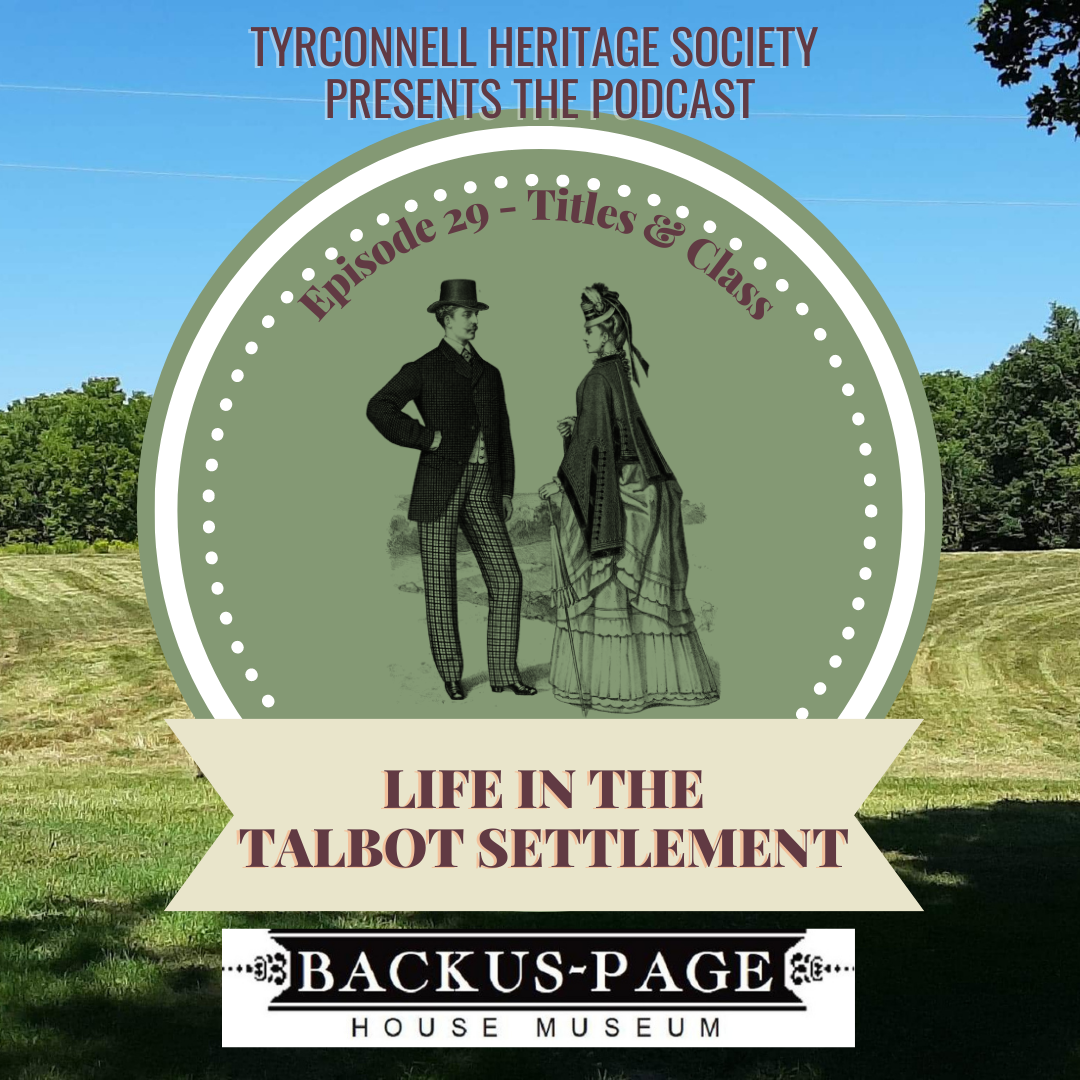 Throughout our podcasts you’ve probably heard numerous social honorifics in the form of titles and prefixes thrown around. Sir This, Mr. That, Colonel Talbot even, but do you know what those honorifics mean? If you’ve even been curious how these prefixes dictate the social hierarchies of the talbot settlement, you’ve come to the right place. Please enjoy this podcast as we cover the meanings, origins and privileges of the different titles used in the mid eighteen-hundreds.

Governed by law, the traditional use of the title sir, signifies knighthood. This subsequently extended to baronets, a hereditary honor holding office under the British crown. But since the late modern period (End of the 18th century onwards) “Sir” has been used as an address for any man with military rank or higher social status than oneself. The use of “sir” and the woman’s equivalent “Ma’am” is a sign of respect, the omission of the title when due is an offensive slight.

Anyone who has come across this title can agree that the word is a strange one. C-O-L-O-N-E-L, what is that middle “L” doing there? The etymological origins of the title help us to understand the peculiarity of the word colonel. From Italian origin Colonna, translating to “column”, or “of a column” the spelling progression of the word is apparent, the meaning less so. Although the direct translation is similar in form, it doesn’t immediately transcend into English but at the end of the medieval period a military company was known as a “column of an army” and therefore the colonel is the leader of a section of troops or army column.

Colonel is once again a military rank, a high-ranking officer, sitting above lieutenant and below a general.

The colloquial understanding of the term mistress is fickle and contextual. The primary definition for its use is a woman that governs “subject and Servant” hence the relation to the upper class. This transcended to all female leads of a household. Under the category of subject and servant is any overseen capital, so farmers and businesswomen were automatically referred to as Mrs. However, there was a second meaning to the prefix not so kindly implied. And that is for the frequented prostitute, affair, or “loose moraled” woman.

Until the late 1800’s the title Miss was used to designate the age of an upper-class woman. Girls were miss, and to call an adult woman “miss” would again be implying they were a prostitute. As young girls are not masters of a trade, nor do they own property, their title is purely that of status.

Which name the title miss was paired with signified her birth order in relation to any sisters. “Miss” accompanied by only the surname, denoted the eldest daughter and any younger sisters would be miss followed by their first and last name. For example, before the death of Eliza Ann Backus she would have been Miss Backus and her younger sister was Miss Mary Backus. “Master” was the male equivalent of “miss” and was only used for boys with high social status.

Lower class women, or women towards the bottom of social hierarchies were not afforded prefixes and referred to by their names alone, and often only their first name.

Mr. Was anyone above one’s own social class, if they did not have the title of Sir or My Lord. This lessened over time as the title was extended to an individual’s equals and then to all men.

Lord and Lady – these are not titles we come across as frequently. Reserved for those who have received an appointment to the House of Lords, nominated through nobility. Or own large areas of land and oversee residents. The closest use to this title here today is “landlord”. And during the 19th century in the talbot settlement the title of lord was not officially obtainable, although occasionally used by workers especially in the northern Scottish areas of the settlement to refer to their boss although this title was not officially recognized.

Gentleman- When we hear the term gentleman the first thing that comes to mind is a courteous and polite man, but the word was also used as a title, denoting an individual as rightfully able to bear arms although not a member of the gentry or holding rank in the military. This honorific title is rarely seen used as a stand-alone but proceeds the individual’s pronoun such as “Mr.” or “Sir” for example, the gentleman Mr. Smith. Alternatively, the title is used as the adjective we know it as today.

Captain – Like militia regiment captain Leslie Patterson or Captain Gillman Wilson 1st regiment middlemen militia, Captain simply means commander. And that is a commander of pretty well anything, in our examples it refers to the commander of a military unit. But you could be the captain of any type of vessel too, from boats and airplanes to spaceships and submarines. The title of captain is given regardless of the size of the regiment, simply he is the leader.

Other titles such as General or Major general are also military ranks, but didn’t carry over into everyday life, and were only used for someone when they were actively serving in that position.

Social mobility is the change in mobility of class. Changing mobility on the same level of status is referred to as horizontal mobility. Movement either up or down status levels is called vertical social mobility. Vertical mobility is possible if society is of open class. One was not judged from sharing and taking part in similar interests to those of a lower or higher class. Everyone would be welcome to converse and act in a similar fashion. Here in small settlements of Ontario Canada, this was almost entirely the case. In Europe, any member of a noble family was entitled to bare coat of arms and considered nobility. This practice among the aristocracy resulted in enormous numbers of titled families whose descendants married only amongst members of their title.  In Europe, mingling with people of lower status was seen as a horrible act and those who did not uphold their family’s class could have horrible consequences. Individuals who acted “out of turn” were shunned by the rest of their social class. Not only would the individual be punished, but the whole family name could be ruined.

A person of higher class exercised a disproportionate influence over the lives of those “below” them. In our area, most families, even if they were of “higher” social class, chose not to participate in the long-held practices of status. For example, Colonel Thomas Talbot was of Irish nobility. The Col. was a simple man, in the words of the settlers, “Talbot baked his own bread, milked his own cows, made his own butter and cheese, washed his own clothes, and ironed and dressed his own linen” despite being aristocratic and living his life around nobility. When Talbots nephew, Colonel Richard Airey, came to visit in 1847, he was astounded to see Talbots habits and clothes. This displeased Airey and he eventually left the Talbot estate and ventured back to England where he could be surrounded by his luxuries.

With all these social honorifics, it feels so easy to make a mistake, using the incorrect title could cause offence and social rife. Next time you use a social title what historic message are you sending?