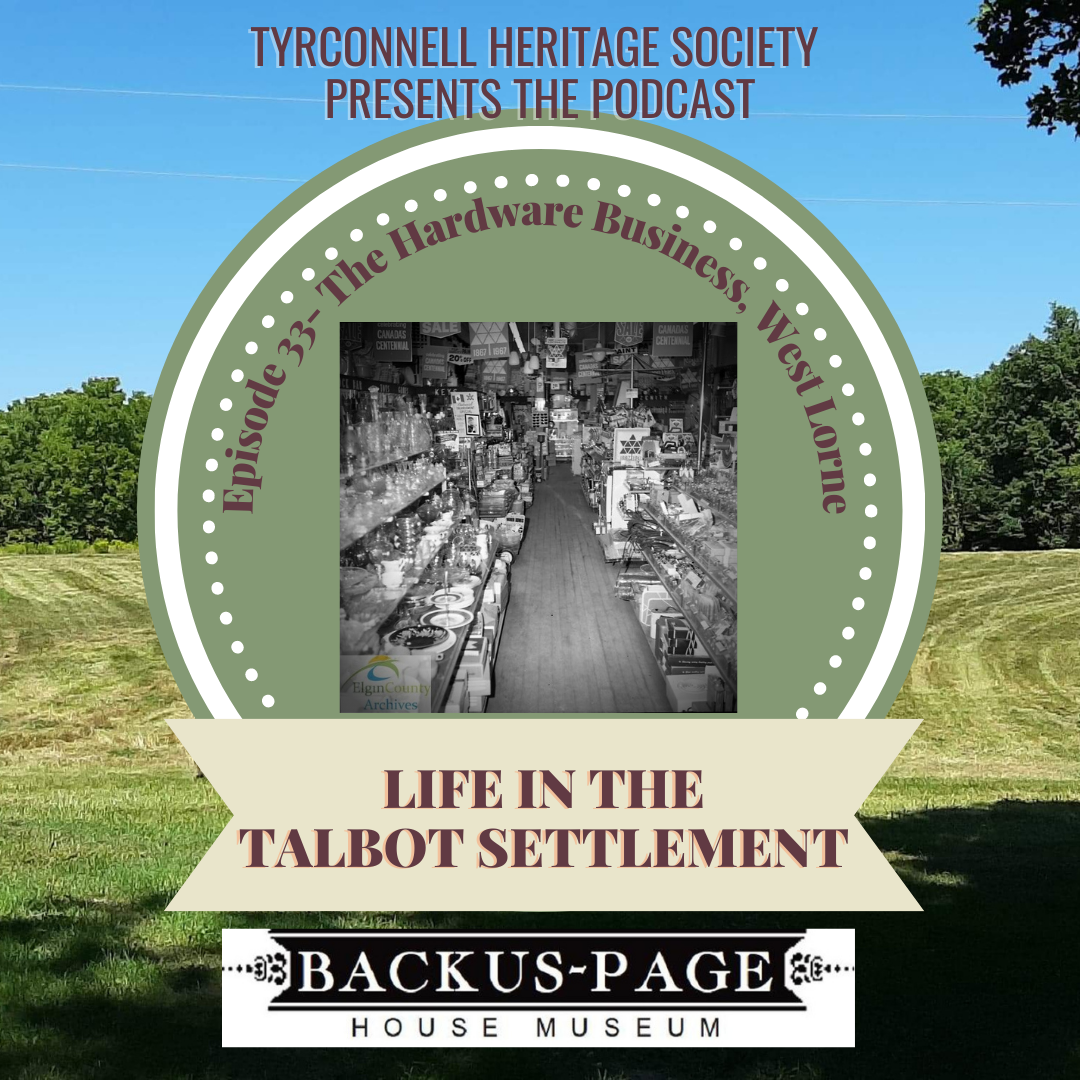 West Lorne’s first hardware store seems to have been established during the 1870’s by William Potts. It was situated north of the railroads track (The Canada Southern Railway having been built in 1871-72), and adjacent to the Wilton Hotel. Beyond a record of its existence no further information has been discovered.

During the 1880’s “Fred Mettam was carrying on an up-to-date general hardware store” south of the track. This store was a frame building on the east side of the street at approximately the centre of the present block. Mr. Mettam sold his business to Joe Westcott.

A disastrous fire destroyed the buildings on the west side of the street in 1898. When they were rebuilt shortly after, by Andrew Streib they became known as “The Streib Block”. One of the stores was built especially for a hardware to suit the needs of Mr. Westcott who moved his stock across the street when the building was completed. A hardware store has continued to occupy the same premises since that time.

Mr. Westcott operated the store for only two or three years when he sold to Benjamin (Ben) Partridge. Mr. Partridge, who exchanged his role as partner in the hotel business for that of merchant, carried on an old-fashioned hardware business with the assistance of his son John. The business included tin smithing- Mr. Jacob Miller was the tinsmith. An interesting story is told of a customer who was charged five cents to have a dipper repaired. The customer objected saying “I could have bought a new one for that price”.

On March 1, 1906 Malcolm McKillop and John Black Ferguson purchased the business and took over the lease from Mr. Partridge. Mr. McKillop had been manager of the Grist Mill, and Mr. Ferguson was resident agent for McCormick-Deering farm implements and machinery. They were brothers-in-law, Malcolm McKillop having married Margaret Ferguson. According to the agreement the partners were to engage in “the trade or business of Hardware Merchants, Tinsmiths and Implement Agents” under the name of McKILLOP and FERGUSON. Capital investment in the firm was $4,000.

The business prospered and the number of employees increased. For several years two tinsmiths were employed- Richard Waite and Quentin Durward. Miss Florence Harris of Rodney was engaged as bookkeeper. Since commuters were unknown at the time the book-keeper boarded in West Lorne.

Many of the store’s customers were farmers, drawn from the large area to the north- as well as the south, east and west—and so, much of the merchandise was chosen to meet their requirements. Fencing, roofing, eaves troughing, glass, fertilisers, stoves, furnaces, and harness were important as well as binder twine, paints and nails and all other items used by builders and repairmen. Buffalo robes, horse whips and of course snow shovels, scythes and lawn mowers were standard equipment.

The needs of the women were not overlooked either- all kinds of cooking utensils, lamps (plain and fancy), cutlery, etc. were part of the stock-in-trade. Prior to World War 1 stoves were designed for wood and coal, lamps for kerosene or coal oil, and “the cellar” at the hardware store always had barrels of coal oil, to which not only farmers but towns-people brought their cans, often for “twenty -five cents worth”.  The elevator that moved the merchandise to the second floor or the cellar fascinated the children of the village, as did the showcase at the front of the store displaying silver, glass and small clocks. Also fascinating to the young fry was the ten-inch-wide board which, several feet above ground level, bridged the driveway at the back of the store and provided the only entrance to the warehouse where fencing and roofing were stored. The contents of the warehouse were of no interest to the boys – and girls-but being able to cross the narrow plank without falling off was a real status symbol.

Later when the gas stove superseded the Quebec heater, the electric stove the wood or coal range, the electric refrigerator the wooden icebox and the electric lamp the coal oil lamp, both models continued to be carried, as the benefits of electricity reached the country later than the town, and it was many years before those off the beaten path or those with inadequate financial resources became electrified or mechanized.

Hours were long and there was no such thing as a half holiday during the week, in those days. Merchants worked from 7 a.m. until 10 p.m.; Saturday nights the hardware, which was a sort of social centre for the farmers, rarely closed before 11:30 or 12 o’clock (midnight). Wives would leave bags of groceries for their husbands to put in the buggy or the Model T Ford, while they visited friends, and many questions-particularly political ones- were settled around the Quebec heater at the back of the store.

Following World War 1 with the movement of men to the cities, attracted by high wages in automobile plants, it became difficult to obtain help for the tin shop.  Moreover, custom made products were being replaced by factory made ones and the tinsmith gradually disappeared. Mr. Ernest Young, a war veteran from Glencoe, joined staff and looked after this please of the business, a large part of which continued to be eaves troughing. A. McKILLOP and FERGUSON sales slip for 1922, carried the caption “If you want eavestrough to stay on, or work done that will stay done, call on us”.

In May 1929, after a brief illness Mr. Ferguson died. Mr. McKillop purchased the Ferguson share of the business from the executors of the estate and. According to the 1906 agreement, carried on under the same firm name. Miss Tena McKillop, a local schoolteacher joined her brother’s business as bookkeeper, a role previously carried on by Mr. Ferguson. Robert (Rob) Evans became a pert-time employee about the same time. This was the beginning of the Great Depression, and for the next few years the hardware business, like all others, encountered difficulties. Many of the necessities of life, such as stoves to keep the family warm and roofing to provide shelter, were available there. There was no shortage of buyers, but a decided shortage of cash. Tobacco growers, who later prospered, were just getting started in this business- still new to the area- and much credit was provided for those who needed glass to build greenhouses and hardware for kilns. Store hours continued to be long, but standards of service were high, and it is illustrative of the relationship between proprietor and his customers that one evening, having locked his store at 10:30 p.m. and having crawled into bed a few minutes later, he was awakened by the ringing of the doorbell. A farmer wanted binder twine to get an early start with his harvest the next morning. The proprietor got up, dressed, went to the store and got the twine. The farmer “charged” it and went home.

Although times were hard merchants in town united to attract customers by novel methods. A “gigantic Co-Operative Community Sale was organised for three days in November 1934, and on the final day ten “choice spring chickens” were tossed from the roof of the hardware store. Catchers were keepers.

The implement business continued to be an important facet of the hardware business, and Mr. Tom Dymock, who had been employed many years earlier, was the salesman who spent most of his time in this field.

During, and immediately after World War II shortages of merchandise occurred in many lines, and businesses were being operated with great difficulty. Mr. McKillop- “Mac” as he was known to the entire community- died suddenly in January 1942. The business was carried on by his sister – Miss Tena- and the other employees until late in the year when it was sold and after almost 37 years the sign McKILLOP and FERGUSON on the window was replaced.

On November 8 (1942) the new owner Mr. Jack Campbell, a well-known area farmer, took possession. He and his wife, with the assistance of Mr. Dymock, Miss Irene McLennan and Mr. Bob Evans operated the business- CAMPBELL’S HARDWARE- until 1945. He continued to carry much the same lines of merchandise.

In 1945 the business again became a partnership – CAMPBELL and CRAIG- when Mr. Allan Craig, a teacher in the West Lorne Continuation School, joined with Mr. Campbell. While most of the lines of merchandise carried continued to be standard, stock was still very difficult to secure. Many new tobacco growers were again settling in the district and needed supplied to build greenhouses and kilns. Unfortunately, glass and nails were particularly hard to obtain but by shrewd merchandising CAMPBELL and CRAIG were frequently able to provide these necessities when many other dealers couldn’t. At the same time, they expanded their stock by adding more China and glassware. Mr. Campbell’s former employees were retained; Miss Margaret McKellar, later replacing Miss Irene McLennan, at the time of the later’s marriage; and Mr. Frank Kornacker was added to the sales staff. Miss McKellar later became Mrs. Kornacker.

In the spring of 1947, there was another change in ownership. On April 11, the firm of FISHER and KEMP replaced that of CAMPBELL and CRAIG. The new owners came from Windsor where Mr. Basil Fisher had been purchasing agent for Standard Machine and Tool Company, Ltd.; Mr. Peter Kemp had been a flight engineer in the Royal Air Force. Mr. Tom Dymock and other employees of CAMPBELL and CRAIG remained on the staff.

Many changes were made in the appearance of the store—new fluorescent lighting was installed, old counters were eliminated and replaced by new display fixtures. Attractive new lines of household equipment and China, to appeal to the housewife, were added. Television sets were a major item of merchandise, Mr. Kemp qualified as a TV technician and was able to provide expert service.

The business continued to operate as FISHER and KEMP until August 14, 1959, when it became a unit of the CREST HARDWADE chain with Mr. Fisher and Mr. Kemp as partners in management. Miss Julienne Vanvaerenberga was engaged as saleslady and more China, glassware, electric appliances, children’s games and novelty items were stocked.

In November 1962 major renovations were made to the building- the basement was filled to level with the main floor, the elevator was removed and the stairway to the second floor was moved to a new location.

Along with other stores on Graham Street, the appearance of this hardware – whose age can be reckoned at more than 60 years- has altered to present a more up-to-date face to the 1960’s.

For the more modern information I’d like to thank Larry Schneider who recently had an article in the West Elgin Chronicle about the Hardware Store.

Rudy Huver had purchased the former Crest Hardware store from Fischer and Kemp in 1976, selling to Jeff and Teresa Knight in June 1988 bringing us to today’s Knight Home Hardware.

The current store is the amalgamation of Lemon’s Department store (Jim Lemon was my landlord when I studied for the ministry in Toronto), the post office and the Crest Hardware buildings.

Unlike many business chains, Home Hardware stores and owners are not franchisees. Home Hardware is a co-operative, with all of the store owners being “owners” of the company.

Home Hardware was founded in 1964 in St. Jacobs, Ont. by Walter Hachborn.

Thank you for reading, we hope to see you back in two weeks for another episode!