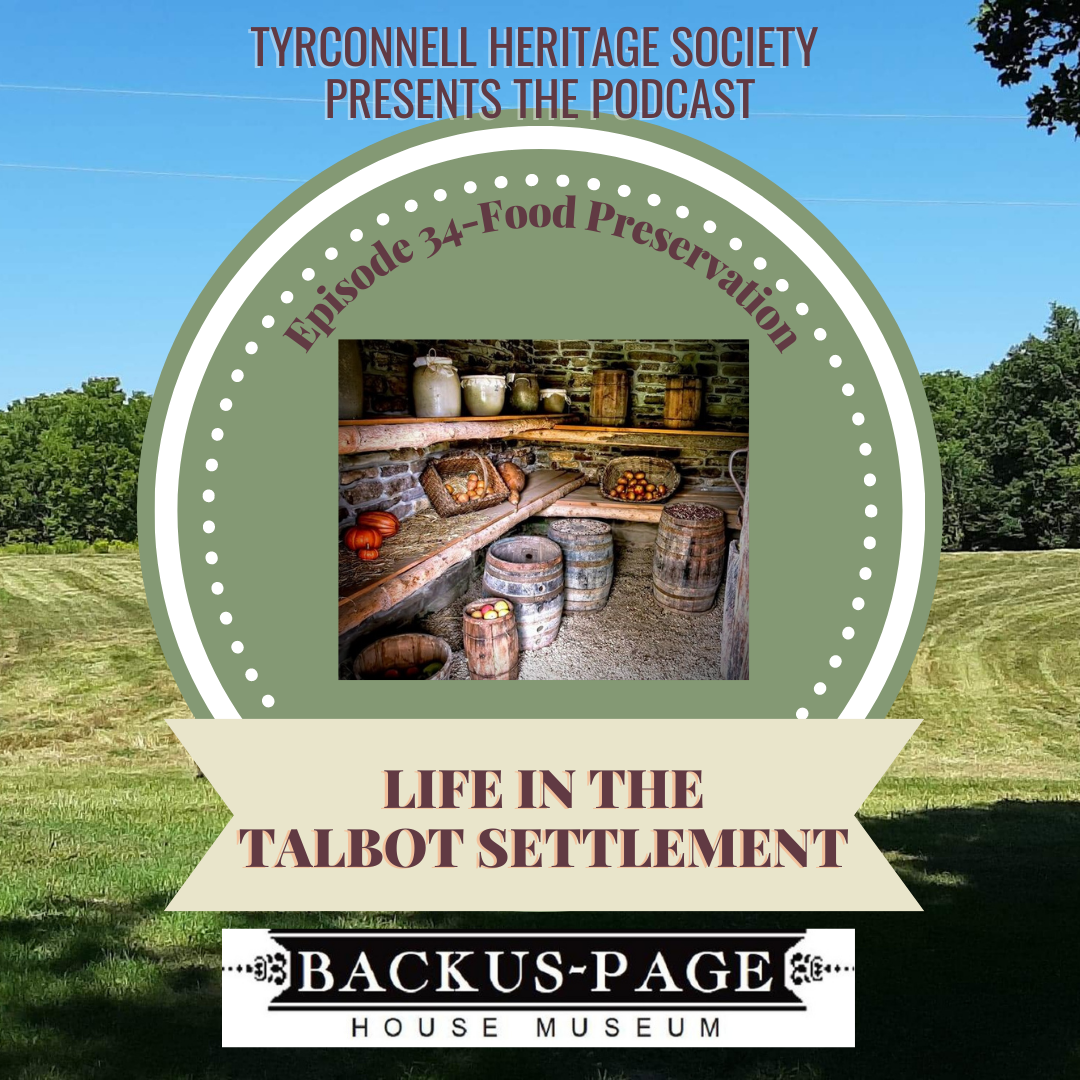 In today’s episode we’ll be talking about the preservation of food throughout the ages!

Canning is a process where food is placed in cans or jars and is heated to kill microbes and enzymes. This heating and then cooling seals the food in a vacuum and prevents other bacteria, mold, or pathogens from contaminating the food. In 1795, Napoleon Bonaparte offered a reward of 12,000 francs for whoever could develop a safe food preservation method to feed his army on the march. Nicholas Appert developed a method that involved heating food jars which were reinforced with wire and sealed with wax and was given the reward in 1809. The first use of tin for canning was introduced in 1810 by Peter Durand. The first glass jar with airtight properties used for home canning was the Mason jar, which used rubber rings and metal clamps, was patented in 1858. These gained in popularity and widely used during the U. S. Civil War 1861-1865. In 1868, John Mason invented a glass container with a screw-on thread molded into its top and sealed with a rubber seal. Other industry leaders were William Charles Ball and in 1915, Alexander Kerr developed the metal lid with a permanently attached gasket and the modern 2-piece canning lid was born.

Jam and Jelly – Honey and sugar were also powerful preservatives. Fruits kept in honey were commonplace in ancient Greece. Romans used honey to preserve the texture of food. Pickled foods came to the west from the Far East. In northern climates, where there is no sunlight to dry fruits adequately, preserves were made by heating fruit with sugar.

Refrigeration and freezing are probably the most popular forms of food preservation in use today. In refrigeration, bacterial action is slowed to a crawl so that it takes food much longer to spoil. When frozen, bacterial action is stopped altogether by keeping enzymes inactive only for the duration it is frozen. Primitive times – 500 BCE. One of the earliest forms of refrigeration was an icehouse. These were used to store ice, which was cut from nearby bodies of water. When temperatures fell, cellars, caves or cold streams were used to increase storage time of food. Ice Houses were originally a pit dug and a building constructed overtop. Once the ground was frozen, it was filled with ice.  The pit may be lined with mortar or stone, and the building probably double plank walls filled with an insulating material like wood shavings, straw, leaves or bark. Food could also be stored in the icehouse or ice brought into the cellar to aid in refrigeration.

1740s – the first artificial refrigeration was invented by Scottish scientist William Cullen. He showed how the rapid heating of a liquid to a gas can result in cooling. This principle is still used today.

1802 – American, Thomas Moore created an icebox to cool dairy for transport. His “refrigerator” was patented in 1803.

1840s – The first iceboxes were made by carpenters and designed to take advantage of regular delivery of large blocks of ice.  The boxes were insulated with a lining of tin or zinc.

1918 – William Durant mass-produced refrigerators for his Frigidaire Company. It was followed by the Kelvinator Company, whose refrigerators featured an automatic temperature control.

1927 – General Electric introduced the first refrigerator to see widespread use.  By the mid 1930s, most homes were getting a refrigerator – at the cost of $1000USD.

1940s – Refrigerators came with separate freezer compartments to store mass-produced frozen foods.          1950s – More than 90 percent of households had an electric refrigerator. Focus turned to design with colours and a variety of shapes and sizes.

Fermentation is the process of converting carbohydrates to alcohol or organic acids using microorganisms, yeasts, or bacteria, under anaerobic conditions. Fermentation usually implies that the action of micro-organisms is desired. Natural fermentation precedes human history. The earliest archaeological evidence of fermentation is 13,000-year-old residues of a beer found in a cave near Haifa in Israel. Another early alcoholic drink, made from fruit, rice, and honey, dates from 7000-6600 BC, in the Neolithic Chinese village of Jiahu, and winemaking dates from ca. 6000 BC, in Georgia, in the Caucasus area. The French chemist Louis Pasteur founded zymology, when in 1856 he connected yeast to fermentation. When studying the fermentation of sugar to alcohol by yeast, Pasteur concluded that the fermentation was catalyzed by a vital force, called “ferments”, within the yeast cells.

There are three basic forms of fermentation. Lactic acid – when yeasts and bacteria convert starches and sugars into lactic acid in foods like sauerkraut, kimchi, pickles, yogurt, and sourdough bread. Ethyl alcohol – where pyruvate molecules in starches or sugars are broken down by yeasts into alcohol and carbon dioxide molecules to produce wine, beer, and mead. Acetic acid – is when starches or sugars from grains or fruit changes into sour tasting vinegar and condiments such as apple cider vinegar and apple cider.

Salting is a method of preserving food, that was common before modern refrigeration. Salting preserves food by drawing water out, preventing bacteria growth and spoilage of the food. The food is surrounded in salt and left in a cool dry place. To preserve meat or fish by dry salting, the meat is cut into small pieces and layered with the salt. The salting can be hastened when the meat and salt mix is placed in the sun. One of the most ancient methods of preserving food is with the use of salt. Beginning in the 20th century, dry salting was replaced with curing for most meats. Curing takes place when salt is mixed with nitrates. This speeds the preservation process and uses less salt. When meat is cured, it is often softer and less dry. The addition of nitrates also keeps meat red in colour instead of the grey colour when dry salting is done. Bacon, ham, and jerky are examples of curing. Brining uses salt in a liquid. The food to be preserved is submerged in the liquid or the liquid can be injected into the meat. The salt concentration, mixed with the meat, is then sealed in a container until the meat is fully preserved. Brining is most often used to preserve vegetables, but also will keep fresh eggs for up to a year. While brining uses salt, pickling adds in acids such as vinegars and often includes herbs and spices to add flavor. Cucumbers, broccoli, cauliflower, kipper fish, and eggs are often pickled.

Drying is the process of preserving food by removing the water from it. By removing the water, the growth of microorganisms is stopped, and decay is prevented. Drying was the earliest and simplest way to preserve food. Archaeologists have discovered sun dried food as far back as 12,000 BCE. These ancient people dried all kinds of food from meats and fish to a variety of fruits and vegetables. The method was simple, food was laid on wood planks, or hung on lines until all the water was removed. Trappers and explorers in early North American countered First Nations who ate pemmican. Pemmican was dried meat, pounded and mixed with fruits and lard to make an early version of granola. In about 200 BCE, the Egyptians developed the use of salt as a preservative. This was a much faster method, and soon replaced the older method of sun drying. Modern dehydration was developed during the U.S. Civil War. Food items were placed in containers and dehydrated by use of hot air. This allowed for the preservation of large amounts of food to be used by an army on the march. Recipe books, such as Mrs. Beeton’s Book of Household Management, published in 1861, gives instructions on dehydrating food for the modern housekeeper. In the early 20th century, food dehydration moved from military to home use. Rationing during the World Wars required the storage of food as it became available, and homemakers learned to dry food in their ovens. Today’s dehydrators come in a variety of shapes and sizes, most with temperature controls and timers to allow most any kind of food to be dried and stored for later use.

Freeze-drying was invented in 1906 by French inventor Arsène d’Arsonval. Food was frozen, ice turns into vapor and microbes do not grow. Freeze dried foods are dehydrated, requiring less space for storage and transportation. They do need to be rehydrated before consumption though and shoudn’t be eaten in their dehydrated condition.

Smoking is divided into either cold-smoking or hot smoking. The temperature of cold smoking is below 80 ̊F/27 ̊C degrees and merely injects smoke into the product without denaturing the proteins, for example salmon, or other types of fish. In hot-smoking the foods are cooked between 160-225 ̊F/71-110 ̊C degrees and the proteins are thoroughly cooked.  Aboriginal people in the northwest smoked fish by hanging them from racks above an open fire.

A root cellar is a structure, usually underground or partially underground, used for storage of vegetables, fruits, nuts, or other foods. Early root cellars, often called “larders”, were constructed under the house, near the house or into a hillside.  Perishables such as fruits and vegetable, would be kept cool to be eaten after the growing season. Winters in Ontario were too severe to leave fruits and vegetables outdoors and settlers were advised to excavate a small cellar with a trapdoor in the floor. This would be large enough to hold twenty or thirty bushels of potatoes and a barrel or two of pork and be accessible for provisions to be used in the preparation area of the kitchen. Depth and shape of the pit, and items stored varied depending on the owner and their crops. Most pits were square or rectangular with plain dirt walls and hard packed floors. Sometimes wood lined the walls and shelves were built as needed. Some barns also had pits dug underneath floors to keep dairy products cool and store root crops for animal fodder. Fruits like apples would be placed in a box or barrel with straw, saw dust, or leaves surrounding each piece. This prevented spoilage as the high level of carbon dioxide inhibits ripening and the lower oxygen level discourages bacteria and mold.  Backus-Page House Museum is built on a sand knoll and food may also have been buried in sand in the cellar instead of boxes or barrels. Yeast would be stored in wood or earthen containers. Preserves in glass or China. Butter needs to be kept cool and cheese needs air to circulate around it so wooden shelves were necessary. Parsnips are best covered in sand excluding all air. Cabbages and potatoes hold up well in cellars and would be packed in barrels or boxes with outside leaves still attached. Often damp moss would be wrapped around the vegetables for even better storage.

A Root House is not internal to the house or barn and was built in place of a root cellar.  It is a pit dug 6 to 8 feet deep and roofed with logs which are covered in earth. This preserves root crops from frost and may be the first form of storage for settlers until a more permanent home was built.

We hope you learned a bit about the history of food preservation and found this episode interesting. Thank you for tuning in, see you in 2 weeks for episode 35 – Party Like It’s 1850!