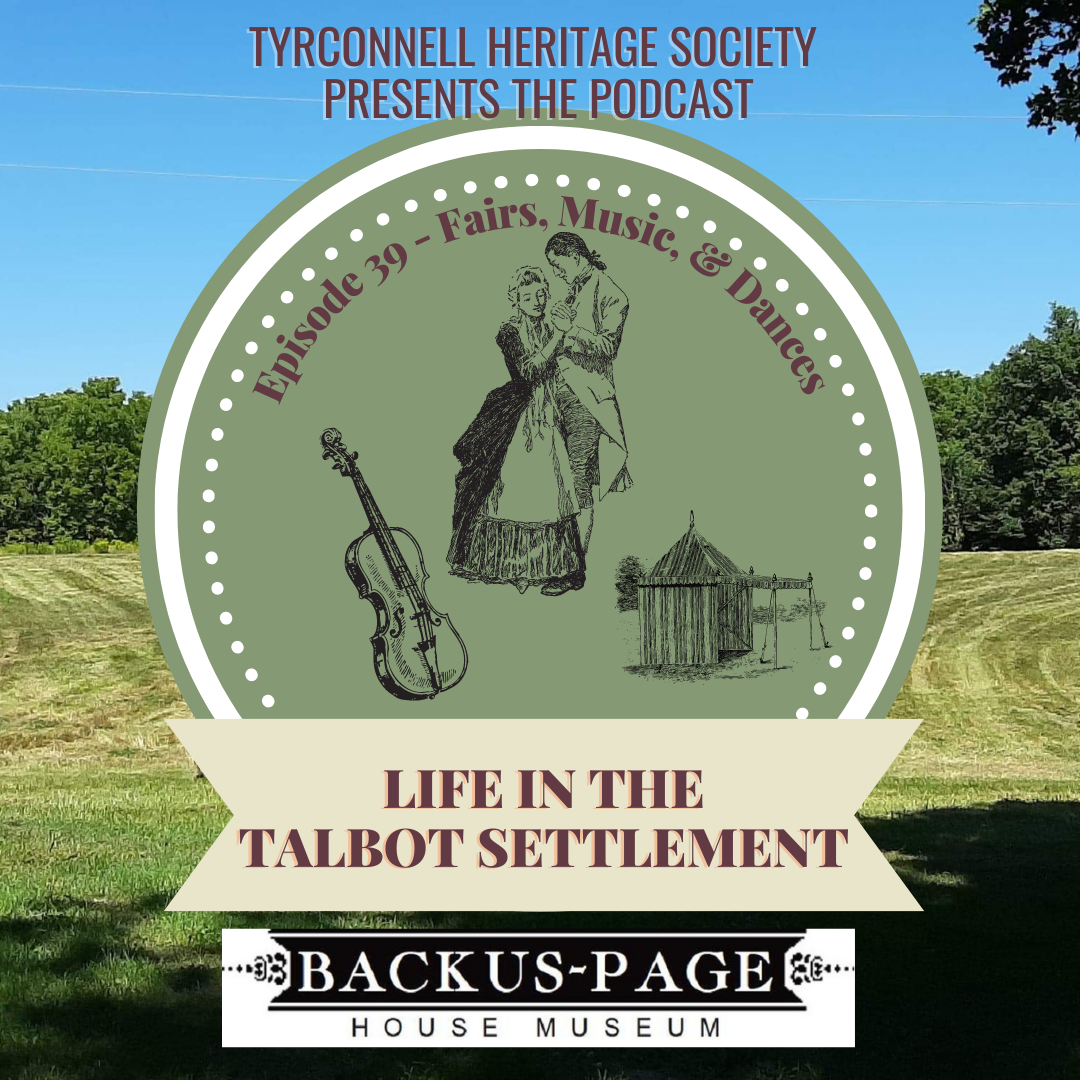 Even in the early days, where pioneer life was all work, people found ways to make it fun. Working bees were a popular way of getting through big jobs, like logging and barn raising. Whole communities would come together for them; the men worked on outdoor tasks, the women would spend the day prepping food, and at the end they would celebrate with a feast and a square dance. For women, quilting bees were a great socializing opportunity. Beyond work, the settlers would celebrate weddings, visits from friends and relatives overseas, welcoming new settlers, and holidays.

For children, fun was found amid chores (berry picking was a favorite) and tricks. There is a spot in Shedden called the Ghost Hill, named for a boy who used to dress in a white sheet and scare the young ladies leaving meetings or choir practice. The “ghost” was dealt with quickly, but perhaps in the town’s amusement, the name stuck.

The fiddle was an important part of pioneer music, and someone would play it at most social gatherings. Aldborough’s resident fiddler was called, “Old Black Joe,” and was known for having one leg. Most every church had an organ once it was established, and in 1883 Rodney had a Brass and Reed band start up. They were popular for a long time.

In the winter, ice skating was a favorite pastime, and communities would gather wherever the ice was thick enough. Sometimes they put on Masquerade Skating Balls, where people would dress up like for Halloween and enter small contests for their costumes and skating skills. There was even a St. Thomas Curling and Skating Club from 1877-1882!

Events were organized by the church until the end of the century, when community groups, like the Aldborough Old Boys Association, the Farmer’s Institute and the Women’s Institutes, were formed. They would have regular meetings, personal projects, fundraising events in support of many causes. These events included but were not limited to fair contests, lunches and meals, concerts, plays, garden parties, bazaars, candy sales, picnics, bus trips, and the ladies’ choir. Youth of the community often volunteered for these events and were encouraged to get involved with programming. Parades were organized for homecoming baseball teams, Old Boys’ and Girls’ reunions, the Rodney Fair, Victoria Day, July 1st Callithumpian, politicians, school fairs, and the Declaration of Peace in 1918.

Another large part of 1900s entertainment was the Port Glasgow Dance Pavillion, built in 1921 by the Aldborough Old Boys Association. It is claimed to being the oldest dance pavilion on the shoreline of the great lakes. While it has been in use since its construction, the first formal dance was held on Wednesday, August third, 1921. Music was played by a local group, consisting of a violin, piano, and drums. It was a Jitney dance, as most of the early ones were, which meant that people had to pay per dance. The price at Port Glasgow was five cents a dance. In 1937 they added twenty feet of floorspace and a three-sided promenade. It is still used sometimes today.

The oldest fair in our area is possibly the Aylmer fair, established by the Malahide Agricultural Society, now the Aylmer and East Elgin Agricultural Society, in 1846 to exhibit the area’s agriculture and livestock. From there through the 1850s it only had a few dozen exhibits, but it grew quickly, and by 1876 had over 1,700 exhibitors! These included the “Women’s Work” exhibitions, which made up 1/6th of the fair. By extension, the Agricultural Society’s numbers grew over 200, and the fair went from an afternoon show to a two-day event. Train excursions were even made from Hamilton, London, and St. Thomas! Unfortunately, due to disputes between the town’s desire for an agricultural show and investors wanting bigger, fancier attractions, the fair was cancelled in 1910 and struggled to resume. This continued until the 1940s, when the fair dedicated itself to war efforts. Even sharing 50% of their every profit, the fair made more income in the war years than any other noted period. It has since continued to grow and thrive, and the area’s residents are happy to continue the tradition.

The first Rodney and Aldborough Agricultural Fair was in 1854, and it is believed to have been started accidentally by a group of cattle farmers trying to promote better herds by purchasing bulls to share amongst the community. The first exhibition was held the next year in New Glasgow, but there are no records of exhibits until the Prize list of 1857. The fair was moved to Old Rodney in 1865, onto grounds around the Stoddard and Stewart mill. In 1949 the Women’s Division was formed, although it wasn’t fully amalgamated into the fair until the 1990s, which also introduced the Junior Fair and School Fair. This year, the fair is celebrating its 168th anniversary.

The Shedden Agricultural Society formed in 1854 and started a plowing match in the southeast of Iona. As it grew, it moved north towards the train traffic in Shedden, but was eventually moved again to today’s fairgrounds. It became two days of tractor pulls, agriculture displays, livestock shows, demolition derbies, children’s activities, junior fair, beauty pageants, and more.

Because the West Elgin Agricultural Society represented Southwold, Dunwich, and Aldborough, a fair in New Glasgow was too far out for most people to visit. One controversy and some physical violence later, they decided to move the fair to Wallacetown, to the land of John Leslie Pearce. The establishment of the Canada Southern Railway in 1873 created a debate about moving to Dutton that lasted 40 years! Remarkably, they held out until the age of the motor car made Wallacetown completely accessible, and in Wallacetown the fair has stayed to this day.

During the Fenian Raids the Canadian Militia set up a drill shed and parade ground on the property where the fair usually ran. Those in charge were gracious enough to let the fair continue using the property once a year. As the raids ended in 1869, the five acres was bought out by the fair, and the drill shed was officially purchased from the government in 1900, for a whopping sum of $5.00. Other land purchases in 1875, 1904, and 1937 brought the grounds to today’s 20.34 acres.

Money was initially handled by John L. Pearce, who kept the money at home rather than trusting one of the area’s few banks. He would be escorted from his house to the fair by a group of his friends. The fair couldn’t meet expenses with admission money, so like many community history and entertainment sites, they relied upon subscriptions, government grants, township and county council payments, and donations from folks and firms. David Bobier and John McFarland gave out so many loans to people in support of the fair that they eventually took over fundraising.

The fair was made to encourage and share methods of improvement for farming and livestock, but the growth of the fair depended on entertainment. Musical tradition started with a piper at the first fair, now becoming full-on evening concerts. Punch and Judy puppet shows were very popular, a series of puppet skits like a cross between a sitcom and a 90s cartoon. Before the arrival of midways, they had a popular merry-go-round. A variety of races optimized the use of the track, including trotting races, bike races, potato bag races, Shetland pony races, greyhound races, and chariot races. There was also tug-of-war in 1901, automobile demonstrations in 1912, WW1 airplane rides in 1919, the first plowing match in 1924, and milking contests.

In the last 50 years, buildings, gates, hydro, washrooms, fences, and community facilities (like soccer and baseball fields) have been added, maintained, and updated. The track, fence, and accessibility features of buildings have been key updates. They also constructed a portable stage, which Is used by the fair and many community members.

Each of the fairgrounds we’ve discussed today still take a lot of work to maintain the grounds, plan events, and fundraise for everything, especially in the last few years. That is why it is so important to show up and support your local fair, by volunteering, donating, or simply participating, in the hopes that these fun traditions will continue for many years to come.