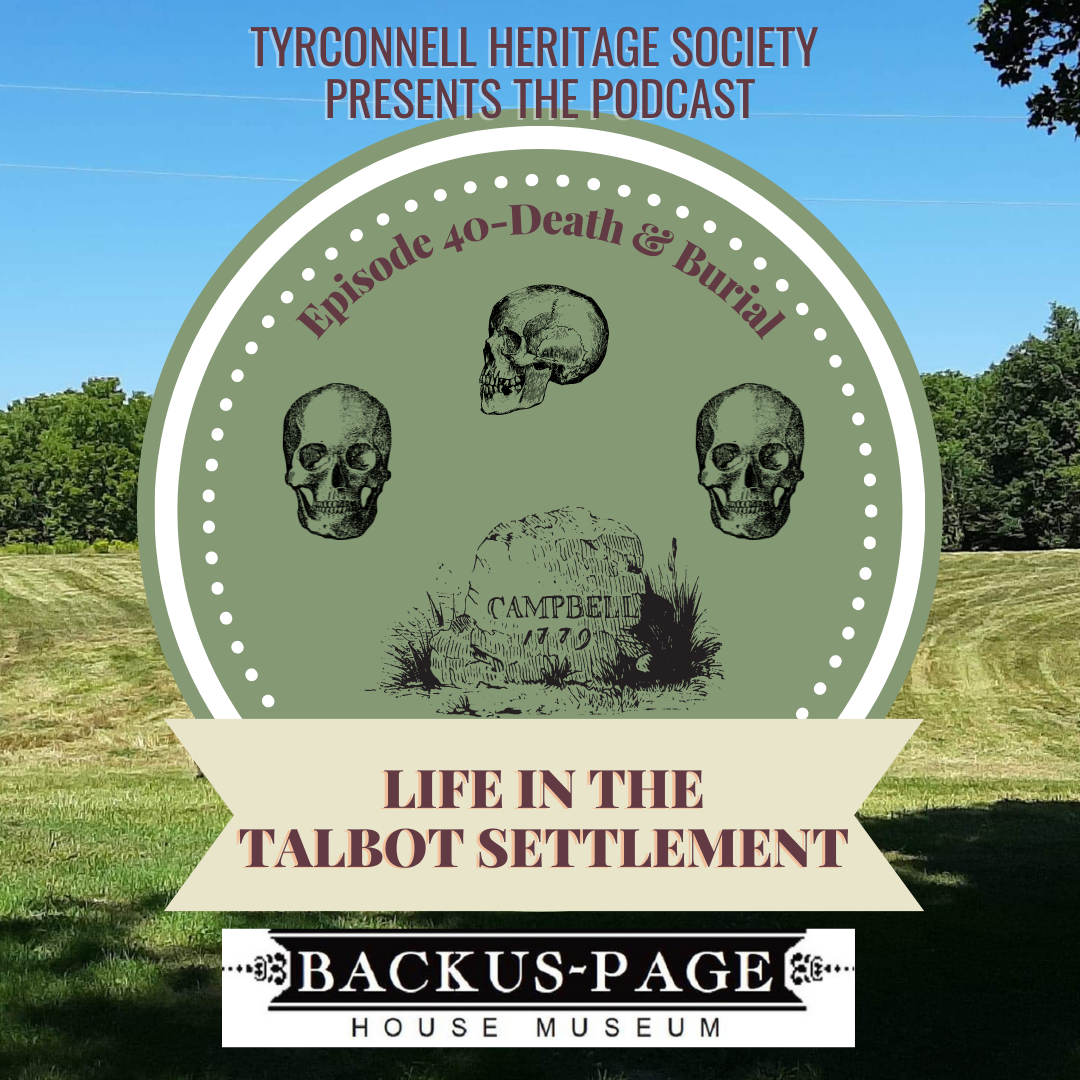 Early settlers handled the death and burial rights of their family very seriously. Today we’ll talk about the ways that settlers cared for and buried their dead.

After a beloved family member had passed on, the first step of the burial process, was the cleaning of the body. Typically, women of the family – including extended family members such as aunts, and cousins – would remove the clothing that the settler had died in. This is because the clothing would usually be reused, since it was expensive and time consuming to make in this time period. The next step would be to purify the body. This was done by washing the body, a process usually done on the kitchen table. You might be wondering, why did they use the kitchen table? The main reason, was simply because there was a lack of other spaces to prepare the body that would maintain the respect and privacy of the family member.   +

One of the first steps after the death was to call the carpenter. The carpenter would be the one to create the casket. Sometimes, the wealthier members of society would be able to afford a pre-ordered coffin or casket. But the average member of society would have a simple wooden box. The bottom of the casket would be layered with sawdust and wood shavings, the purpose of these was to absorb any bodily fluids. Next strips of linen cloth would be laid across the bottom of the coffin, with a large shroud placed over top. The body would then be placed on the shroud. They would pose the body, by crossing the arms over the chest, or simply laying them at the sides of their body. Then, the sheet would be folded around the body, and the linen strips would be used to tie the shroud together. Pennies would then be placed on the deceased’s eyes; this was because the eyes would often open due to muscular contractions. They would also place a bowl of salt and soil on the chest of the body. This was meant to symbolize the Christian physical and corporeal forms.

Once the pre-burial practices had been completed. Family, friends and neighbors would be notified of the funeral and wake. During the wake period neighbours and friends would band together and help the family of the deceased. Chores, cooking, firewood and other everyday household and farm tasks would be upheld by neighbours, giving the family time to mourn with their loved ones. The casket would be placed across a set of chairs against a wall, as those closest to them gathered at makeshift benches; a plank across two chairs. Windows were covered, mirror and pictures were turned to the wall, clocks were stopped and those in the house kept very hushed. The only sound filling the quiet room would be readings from the Bible and noble speeches from those gathered. Once communities had established a clergy, proper sermons would later replace this practice, but in the meantime, dedicated individuals would speak the gospel.

Later at night, a variety of food would be presented. Biscuits, cheese, bread, and whiskey were passed around, often turning the mourning into a celebration of life.

After the wake was complete, the funeral would be set in motion. The community’s bear and mortcloth would be sent for, and 6 pallbearers would be chosen. Pallbearers would often be close to the same age and status as the person being buried, with of course exceptions for children and women. The casket would be carried at shoulder height with one pallbearer at each corner of the coffin. The two pallbearers who were left would march in the middle on either side. The purpose of this was if the walk was long, those carrying the weight could switch out, making the process faster and less dangerous.

Sometimes burial places were inconveniently far from where the person had died, and no group of able-bodied people could carry it all the way. In cases like that, a linchpin wagon was used. The wagon would carry the casket, followed by one or two carts carrying the funeral party. Families of wealth or lineage often had a winding sheet. Winding sheets were used to wrap the coffin during transportation. This sheet would not stay on the casket during burial, it would be washed and reused for future family members.

In the early days if consecrated church graveyards were not established, it was common practice for people to choose a nice spot on their farm to use as a family burial ground. Attendees of the funeral would be dressed in their church clothes, as specific funerary wear was rare. Calico and flannel were frequently accepted patterns, as long as they had no collars or cuffs. Mourning pins, small jewelry pieces with a lock of the loved one’s hair would be worn by family members. Some mourning pins were made to be worn around the neck, which is the origin of the locket. When photographs became accessible, it was a much more appealing alternative to use a picture instead of the person’s hair.

A mortcloth, or pall, would be draped over top of the casket when the body was in the church. The mortcloth typically resided within the church and would be used for funerals. This was a cloth that would be placed over the coffin and would cover the casket. The mortcloth colour would depend on the religious and cultural affiliations, the colouring of the sheet varies, but is typically black or white, though there are also mortcloths that have a cross decal on them. Once at the resting place the casket would be placed on the bear, a stretcher-like wooden structure designed specifically to hold a casket.

Lack of clergy meant that one of the community members would have to step up for the sermon. Settlers in our area often asked Colonel Mahlon Burwell to lead their services, as he was of station in his masonic lodge and lead some of their rituals and prayers. Before the coffin was nailed shut, the 23rd Psalm was read alongside the Lord’s Prayer.

One final prayer was spoken, taken directly from the Scriptures: The Lord’s Prayer. It would not only remind the mourners that this was the will of God, but it would offer them comfort that God was in control. The prayer goes as follows:

Our Father, who art in heaven,

Hallowed be thy name.

Thy will be done on earth,

as it is in heaven.

Give us this day our daily bread.

And forgive us our debts,

as we forgive our debtors.

And lead us not into temptation,

but deliver us from evil:

For thine is the kingdom,

and the power, and the glory,

To ease the sorrow of the mourners, the pastor would then recite the comforting words of the 23rd Pslam:

The Lord is my shepherd; I shall not want. He maketh me to lie down in green pastures: he leadeth me beside the still waters. He restoreth my soul: he leadeth me in the paths of righteousness for his name’s sake. Yea, though I walk through the valley of the shadow of death, I will fear no evil: for thou art with me; thy rod and thy staff they comfort me. Thou preparest a table before me in the presence of mine enemies: thou anointest my head with oil; my cup runneth over. Surely goodness and mercy shall follow me all the days of my life: and I will dwell in the house of the Lord forever.

After the sweet words of solace were spoken, the casket was ready to be lowered.

When the casket was at the edge of the grave, men would remove their hats, and everyone stood for a moment of silence. The coffin would then be lowered into the grave by ropes. The funeral procession would stay until the last shovel of dirt had filled the grave, then they would go back to the house of the family for a luncheon.

This would have been the practice for a typical funeral in Upper Canada in the Victorian Period, but there were some exceptions that occurred in moments of tragedy.

In 1889, the township of Southwold experienced a smallpox outbreak. Bodies had to be buried within one or two hours of their death. The middle of the night was no exception for this protocol. Caskets for effected smallpox victims were often the simplest of boxes, packed with quicklime, thought to combat the disease. Funeral attendance was kept to 2 or 3 family members and was often done with or without clergy. It is recorded that during this time the Sexton Church custodian dug the graves and conducted most of the burials.

In the early days, some small settlements would not have a carpenter to make the caskets. Families would make do with Walnut Logs, hollowed out on one side with a slab to serve as a lid.

If a person had died in the middle of winter while the ground was frozen, the bodies would have to wait until the Spring when the dirt could thaw. This was an ugly, smelly time for undertakers, but one that was unfortunately necessary.

This was sadly the case for Colonel Thomas Talbot who died February 5th, 1853. There are several stories about the transportation of the old Colonel’s corpse. Whether or not they are true is uncertain. One tale tells the story of James Blackwood, an acquaintance of Talbot’s who reacted to the plight of the transportation of his body. It is said that the body of Thomas Talbot was transported unclean and in the back of a hay wagon. On route from London Ontario to St. Peter’s Anglican Church, the workers stopped to get food and drink. Even though it seemed they had already partaken in much of the latter. When James Blackwood saw the wagon in front of his store, he and his people were disgusted at how the Colonel had been treated. They decided to wash and wrap Talbot in the Blackwood family winding sheet out of respect and dignity. It’s said a clergyman returned the sheet to the Blackwoods once the body had arrived at the church. The winding sheet has since then been passed on to us. Visit us at Backus-Page House Museum if you’d like to see this cool artifact!

As time wore on, the formalities of burial services changed and grew. Funeral parlors became popular, so that one wouldn’t have to host a dead body in their own house for a long time. According to a Chronicle article by Larry Schneider, the first funeral service in Rodney was opened in 1882 by William Love’s furniture and undertakings store. It changed hands to James Cullen in 1885, and he operated out of West Lorne for a time. In 1888 Albert J. Liebner purchased the practice and added caskets, courtesy of his father, in a showroom on the second floor. Another parlor was opened in 1887; then called Rodney’s Chapel, now Denning’s Funeral Home. D.N Walker joined Liebner’s company from 1906-1919, where it was sold and became a hardware store until 1930.

If you’ve made it to the end of this episode, thank you for reading! See you again in 2 weeks!