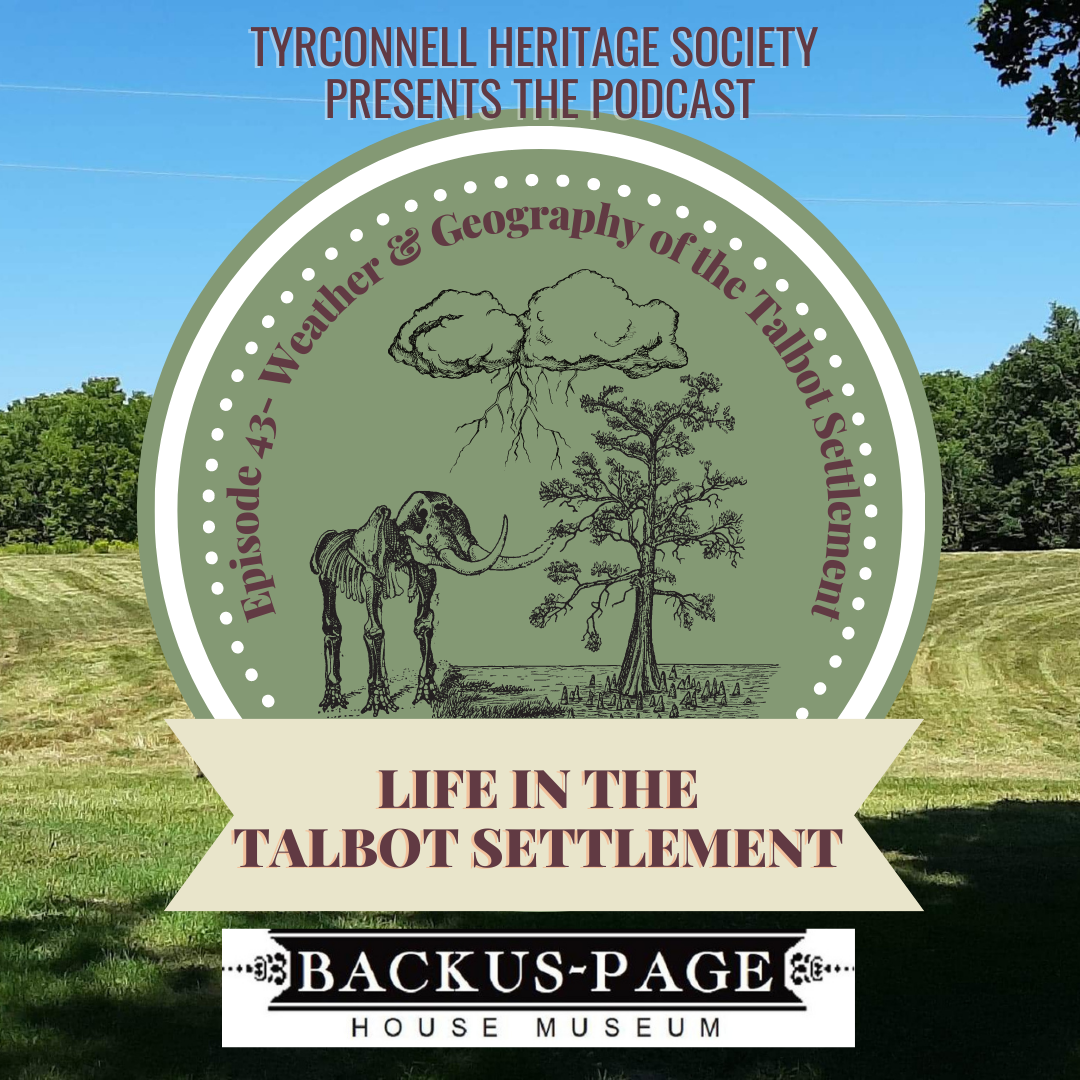 To start off this episode we’re going to talk about some of the intense storms and weather that impacted the settlers. Since the beginning of time, humans have been careful weather watchers. Indigenous peoples of Canada relied on their knowledge of landscape and natural environment. Early European traders, explorers, and trappers wrote weather conditions in their logs and diaries. Over a century and a half ago Canada’s first meteorological observatory was established. The Toronto Magnetic and Meteorological Observatory was created in 1839 and used the most advanced equipment of its time: Mercury thermometers, barometers, and rain gauges. Most afternoon newspapers began to publish the telegraphed weather statements as soon as they became available. In the beginning it was only a recitation of the previous day’s highs and lows across big cities in Canada. Later predictions and weather maps were offered. In larger cities that had same day postal services, you could receive a mailed forecast of the next day’s weather. For farming communities along railways, a system was developed in 1884 to get the weather statement out. After the morning dispatch the trains fixed large metal discs shaped depending on the approaching weather, on the railcars. The farmers working in the fields would see the statement and know the upcoming forecast.

April 30th of 1869-The Canadian Home Journal writes “R. Nelson offers for sale a good instrument for six dollars. Every farmer should have one. To know that a rainstorm is approaching a few hours before it does come would save the price of the instrument many times in the course of a season.”

Written in The Candian Home Journal July 2nd, 1869, a terrible tornado that hit London and Nissouri was described. “A tornado, terribly destructive in its effects, passed over the townships of London and Nissouri on Sunday afternoon last. The first intimation which the inhabitants had of the impending storm was the appearance in the northwest of an intensely dark and wild column of cloud, which shed an ominous gloom over that portion of the sky and gave out a peculiar sound such as that heard near the seashore during a storm. At length, this cloud, after gathering all its fury, burst with terrific violence upon the northern part of London township, about the Proof Line Road, 15th concession. Everything more or less yielded before its dreadful march. Houses were unroofed, and their terrified occupants rushed forth in dismay; barns were blown down, forests uprooted, fences scattered in all directions, crops torn up by the acre as with a mighty hand, and fields completely devastated; while the frightened cattle ran wildly bellowing through the fields, and all nature in the remorseless track of the tornado presented a scene of absolute chaos.”

“A barn belonging to Mr. Chas. Wells was unroofed, the fences being lifted into the air and wafted a considerable distance. The dwelling house of Mr. McMeehan was also unroofed, and a shed of moderate size lifted bodily from its foundation and whirled in the air to a height of some twenty or thirty feet. The farm of Mr. James Scott next obstructed its course. Here a bush was laid waste, the trees being plucked up and buried forward with a deafening crash, the fences also being completely thrown down. —The whirlwind had by this time reached the 18th concession; and here a cutter was seized in its power and hurled high up in the air a distance of three quarters of a mile or more. The house of Mr. John McRoberts was unroofed, and his fences swept away like straw. The bush and fences of Mr. Edmond Jackson and Mr. John Evans were uptorn and scattered; James Dickenson’s farm buildings were blown into pieces.—-From this point, the storm passed into Nissouri, and a farmer named Moore, while running for shelter from its approach, was caught and dashed forward with tremendous violence and received serious injury. Flocks of sheep were whirled in a moment into the air and carried headlong with the tempest; fence rails and cordwood sticks were snatched up and sent through the sides of dwellings or wedged so deeply into old stumps as to require the united exertions of several men to extricate them. Much more damage has no doubt been done, the reports of which are as yet indefinite.”

The weather during the spring and summer months here in the settlement was very unpredictable. During the warmer months, rain, hail, and wind threatened the settlers and their dwellings. While the winter months brought heavy mountains of snow, ghastly winds and freezing temperatures. The year 1869 had many bad weather events. On August 20th   rain fell a little before dark continuing with no interruption for roughly three hours. Vivid flashes of lightning, deep thunderous bangs, added to the rain which fell harder than it ever fell before. The streets of Elgin County were flooded, ditches filled to their utmost capacity. Kettle Creek had morphed into nearly a river’s size. The oat crop, which previously stood proud, was flattened to the earth. Barley suffered the wrath of the storm as well, making the cutting operation very difficult. In Southwold, Mr. Hugh Fulton’s milldam, on River Road, was carried away along with a portion of the mill, fifty saw logs, and about 7080 feet of walnut lumber.

Another such event in 1869 took place June 25th, the barn of John Gillies, near Eagle, was struck by lightning during a violent storm. The electric fluid passed down a post of the building, partially rendering it, but otherwise doing little damage.

During the winter of the late 1800s snow was monstrous. The trail between Aylmer and St. Thomas (now HWY 3) was drifted with snow up to the fence tops. Through the most severe blizzards and negative temperatures, Samuel Shipp and his market sled made their regular circuits. When Shipp would be advised to turn back as mail wouldn’t have been sent out for multiple days because of the snow, Shipp would reply “The trouble with them is that they’re not English”. A trip between St. Thomas and Port Burwell took 8 hours with snow up to the horses’ bellies. Shipp would tramp back and forth to pack down the snow so his horses could make their way through. One time when he was preparing to leave St. Thomas, the temperature read -36 F. A friend approached him who was in the same business and was going home to Belmont that night. He asked Shipp to “come inside for a drink or else he will certainly freeze to death tonight” to which Shipp replied with “I never drink anything stronger than what I give my horses.” Several miles in the trip, a blizzard hit. 2 miles from his home of Port Burwell, the horses snapped off the tongue of the wagon. Shipp left his wagon and walked his horses into the village. The following day the newspaper carried an account of a Belmont man being frozen badly between New Sarum and Belmont during the night. The man was so badly frozen they had to amputate both hands, several toes, his nose, and ears in the hospital. The condition was so critical that the only way out of his suffering was death.

Storms like this occurred regularly in the 1800s. Luckily, for the settlers along the shore, summers were typically cooler and the winters warmer, due to the proximity of Lake Erie. Though along with the much-appreciated temperatures Lake Erie provides, the residents of the shoreline endured the hardships the great lake has to offer. If you want to know more about how Lake Erie affected the lives of the settlers, check out Episode 32-Ports & Shipwrecks of the Talbot Settlement.

Based on The Soils of Elgin County Volume 1, our area of Tyrconnell has an abundance of eroded channels. The strong “v” shaped channels have narrow bottoms and strong side slopes. The side slopes are greater than 15%. The soil is an undifferentiated material that composes narrow stream or creek channels. The texture of the material is variable. In this area natural drainage is rapid to poor. Soil scientists noted that minor occurrences of low-lying alluvium flood plains may occur in some areas. Alluvium is a deposit of clay, silt, sand, and gravel left typically by streams in a valley. This alluvium produces very fertile soil.

We have evidence that Mastodons and Mammoths were present in North America at the same time as early humans, but we don’t have any direct evidence they were being hunted (though there is evidence of mammoth hunting in other parts of the world). Many remains have been found here in our little area of West Elgin. Sons of Jacob Berdan, Isaac Freeborn and Francis found skeletal remains of a mastodon with seven-foot tusks in the swampy part of Lot 36 in 1858. The Mastodon skeleton now resides at the ROM. Another mastodon was found east of Wallacetown. Long ago the area was recovering from the last glacial period, a mastodon died in a swamp. Thousands of years later the swamp turned into a peat bog and the bones of the creature preserved. A little boy, son of Alex Horkay, came upon the bones while ploughing a field on a farm east of Wallacetown on the south side of HWY 3. The leg bones of the animal were 40 inches in length and socket joints thirty inches in circumference. The teeth from its jaw were as big as the boy’s head. The massive tusks were thirty inches in length. Once news spread, the remains were taken from the county.

Elgin County has one of Canada’s longest growing seasons and an above average number of sunny days. The County contains some of the nation’s most fertile soil. We are also located within the 1% of Canada’s geographic area, the Carolinian Zone. The Carolinian Forest Zone is home to more species of flora and fauna than any other place in Canada. It is estimated by botanists that 2,200 species of herbaceous plants are found here in the Carolinian forest. This includes 64 species of ferns, at least 110 species of grasses, and over 130 different sedge species. There are 70 species of trees in this zone alone. Numerous reptile and amphibian species make their home here. The Eastern Spiny Softshell Turtle and the Eastern Fox Snake, for example. Almost 400 bird species have been recorded here representing over half of the species in all of Canada. This makes us a very popular destination for bird watchers! This region has one-third of the rare, threatened and endangered species found in all of Canada. Sixty-five percent of Ontario’s rare plants are found in the southwestern region, and 40% are restricted to the Carolinian zone. Included in these are trees such as the Pawpaw, Blue Ash, Tulip, and the Kentucky Coffee Tree. This area has attracted many naturalists, conservationists, birdwatchers, and botanists.  We encourage you to come out and visit John E. Pearce Provincial Park! There are many walking trails and informational history signs along the way. Our area of Western Elgin County has so much to offer, and we’d love to share our little portion of the Carolinian Zone with you!

Thanks for reading or listening! Catch us next week with another episode!