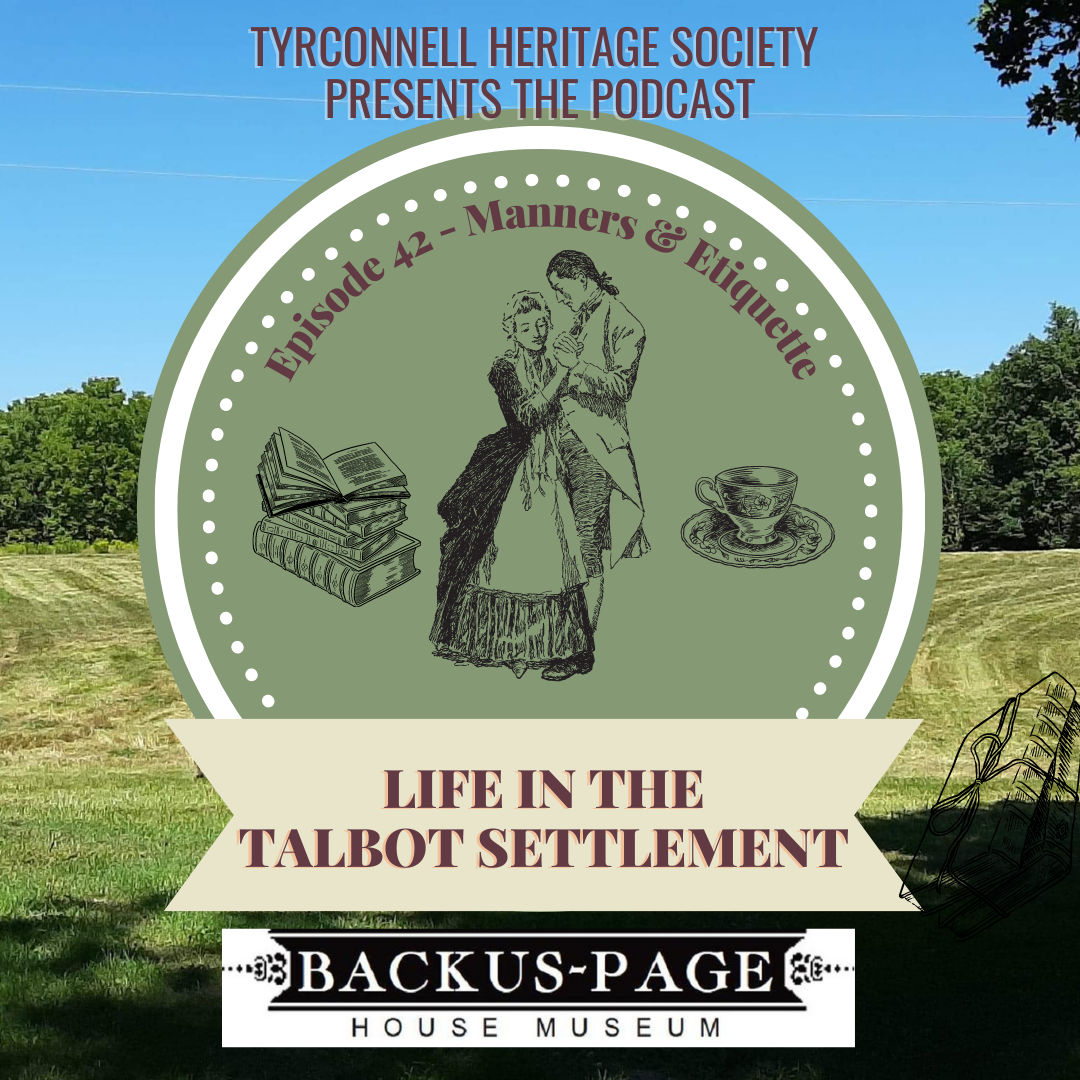 Rules, rules, rules!  Until the 1960s and 1970s, most people’s lives followed stricter social rules of etiquette then we have today. Rules of who you can socialize with, what job or career you can have, and often even what food you can eat.  Many of the rules, or in some cases, laws, were written down, but many of them were informal or traditional.

The informal, traditional rules, we learned from our family. We were also taught in school. One of the first rules which must be followed was that of the Introduction.  In the 1850s, even the Backus family was respectful of social rank, and how to introduce one person to another was dictated by a set of rules. Many of us in the 21st century who are of a “certain age” were taught in primary school the correct way to introduce our friends to our parents, even though formal social rank was not a consideration for most people in the mid 20th century.

As with most of the rules of the mid to late Victorian era, there were books which include rules about introductions. To quote from Routledge’s Manual of Etiquette, written in 1879:

To introduce persons who are mutually unknown is to undertake a serious responsibility, and to certify to each the respectability of the other.

Where the sexes are the same, always present the inferior to the superior. Never present a gentleman to a lady without first asking her permission to do so.

When introduced, persons limit their recognition of each other to a bow. On the Continent, ladies never shake hands with gentlemen unless under circumstances of great intimacy.

In the 21st. century, introductions can still play an important role, especially in a business/professional situation. Many large corporations hire consultants to give etiquette classes, and these include how to make introductions.  Today’s requirements are a great deal simpler for example:

First – state the name of the person being introduced to.

Third – State the name of the person being introduced

Finally – offer some details to start a conversation

There may also be times when it is necessary to introduce yourself to a business acquaintance or in a group meeting. To make it easy to remember, here is a example from a modern movie:

Your name – My name is Inigo Montoya.

Your reason for meeting – You killed my father.

Your expected outcome – Prepare to die!

To the Backus family, one of the most important tasks for Mrs. Backus was to ensure that her daughters were married into good families.  Courtship in her life was much different from what we look at as dating today.

The time for a young woman to enter society and assume her role as a marriageable woman was determined by her parents. A woman was also expected to have completed her education typically around age 16 and courting before this age was highly frowned upon. A young lady was chaperoned at public entertainments, such as theatre or dances, by her parents, brothers, or a family friend. (Once she became formally engaged, her fiancé became her “legitimate protector and companion.”) She always followed acceptable behaviors, and books were written that outline what that would be. Mrs. John Farrar wrote The Young Lady’s Friend, that was published in 1837. She called for “delicacy and refinement” when in the company of young men. “Never let a man hold your hand; decline his offer of assistance with getting in and out of carriages.” Mrs. Farrar summarized: “Your whole deportment should give the idea that your person, your voice, and your mind are entirely under your own control. Self-possession is the first requisite to good manners.”

A gentleman did not consider courting a woman unless he had been formally introduced to her. (Men were not without their etiquette manuals: Lord Chesterfield’s Advice to His Son on Men and Manners, first published in 1774, was the popular source.) As they became acquainted, and if he perceived that she was not averse, a gentleman took the next step — writing to the lady’s father to ask permission to pay a visit to their home. As soon as the father established that a young gentleman was suitable company for his daughter, courtship commenced. In the young lady’s front parlor, with a chaperone present, a courting couple engaged in allowed activities including singing, talking, piano playing, and parlor games with other guests. Supervised carriage rides and outdoor excursions to dances, picnics, dinners, and concerts were also permitted. By the mid nineteenth century most young people, and many parents, believed that people should marry for love, but permission from parents was still important. Long engagements were common, and it was not considered proper for a young couple to marry until the man could support his wife in a decent home.

As young ladies looking to marry, and young men looking for a wife, the young people in the Backus family took advantage of a variety of social situation. A dance was one of the most available means to mingle with others of their age.

As with most activities, there were rules governing behaviour at these dances. The rules covered when to dance, who to dance with, and even how loud to speak.

Be very careful how you refuse to dance with a gentleman. Be careful that you do not engage yourself twice for the same quadrille.

Let your manner in a ball room be quiet. It looks very badly to see a lady endeavoring to attract attention by her boisterous manner, loud talking, or over-active dancing.

At the end of each dance, your partner will offer his arm, and conduct you to a seat; then bow, and release him from further attendance.

When invited to dance, hand your ball card to the gentleman, who will put his name in one of the vacant places.

If you are accompanied by a gentleman, besides your father or brother, remember he has the right to the first dance, and will expect to take you in to supper.

Never leave the ball room, for any such purpose, alone, as there are always gentlemen near and round the door, and it looks very badly to see a lady, unattended, going through a crowd of gentlemen.

It is best at a ball, to dance only every other dance, as over-fatigue, and probably a flushed face, will follow too much dancing.

Never allow your partner, though he may be your most intimate friend, to converse in a low tone, or in any way assume a confidential air at a ball.
No young lady should go to a ball, without the protection of a married lady, or an elderly gentleman.

The Ladies’ Book of Etiquette, and Manual of Politeness

By Florence Hartley, published in 1854

Thanks so much for reading or listening till the end of this episode. We hope this topic intrigued you and added a bit more information into how people were supposed to act. So, now that you’ve listened, would you adhere to all the rules?  Comment below!