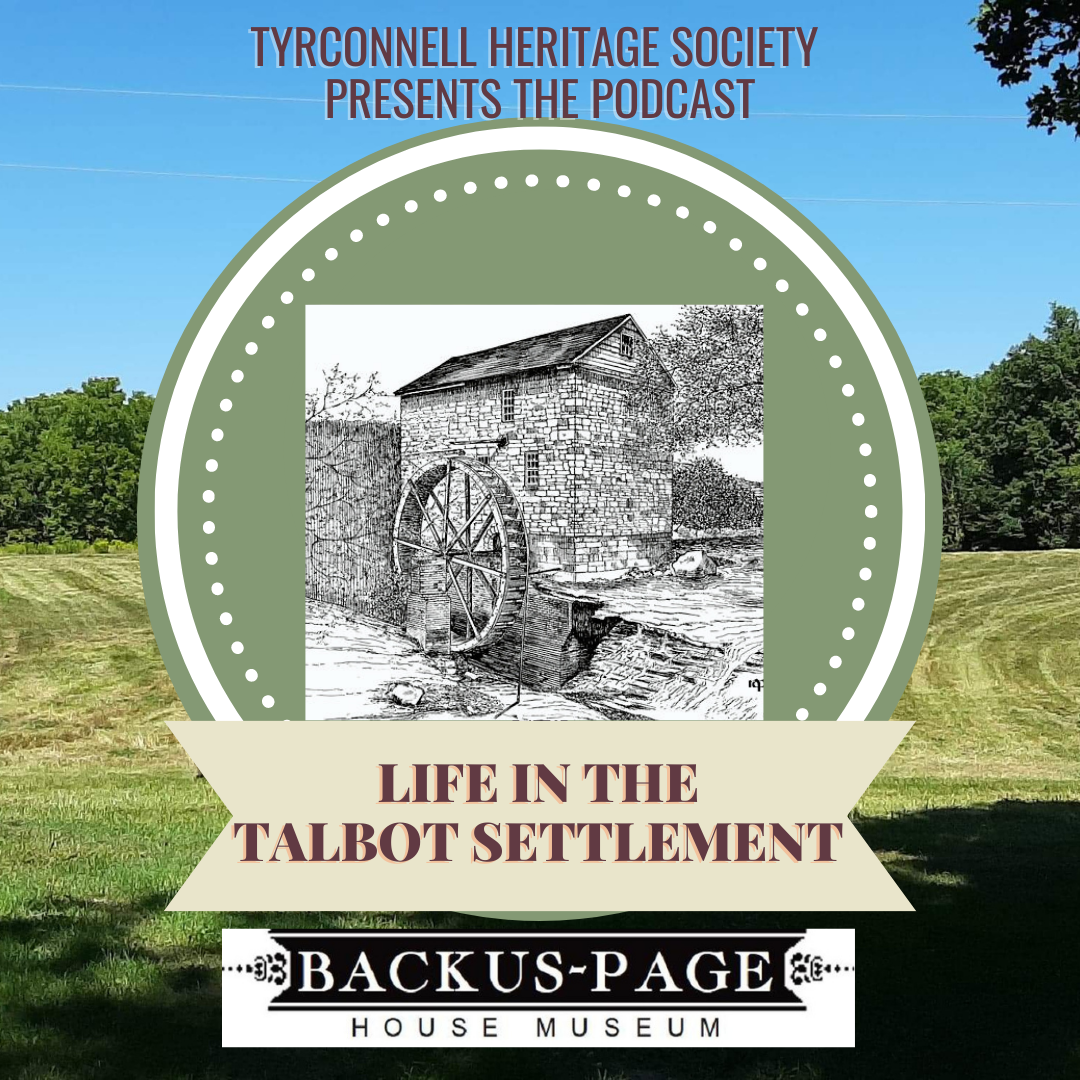 “From many miles in the north a man carried a bushel of corn to the mill in the south, but to his great disappointment he found that the mill had broken down and he could not get his meal. Undaunted, however, he carried the corn back home again, where he and his brother hollowed out a fresh stump, put the corn therein and pounded it until it became meal.” – the pioneer days in aldborough pg 20

Today our focus is the importance of mills to the settlers of the Talbot Settlement. What if your community didn’t have a mill?  Luckily, as the population grew, so did the number of locations to grind the forever-needed grains.

At the conclusion of our last episode you heard that the Grist Mill at Port Talbot was burned during the raids of 1814 leaving settlers without a way to grind wheat into flour.

Before we get too far into this topic it might be a good idea to explain how a Grist Mill works:

As water flowed from the millrace (a channel carrying what should be a swift current of water) onto the water wheel, troughs built into the water wheel filled, and the weight of the filled troughs brought them down and caused the wheel to turn.  A water wheel was usually constructed from wood or metal, with a number of troughs, blades or buckets arranged on the outside rim.

You can feed water wheels with a mill pond, formed when a flowing stream is dammed. The race bringing water from the mill pond to the water wheel is a headrace; the one carrying water after it has left the wheel is commonly referred to as a tail race.  Obviously all mills had to be placed along creeks and streams that had water running with enough force for the wheel to turn.

The mill was the basis of survival in any settlement because flour was used to make many meals and was unavailable until a grain crop was sown, grown, collected and ground.  Flour at the time was considered more important than lumber.  Let’s face it trees were everywhere and in the way of planting crops.  Your harvest fed livestock as well as the people caring for them.

When there was no mill in western Elgin County, in order not to die of starvation, settlers had to travel to Long Point to use the mill there.  Imagine walking for 3 days through a forest carrying bags of wheat, corn, or rye and then walking 3 days back this time with bags of flour.  You could instead create an alternative method of grinding at home some are using the back of an axe to crush grain against a flat stone, burning out a tree stump for a mortar and making a wooden pestle.  Some settlers tried boiling their grain in lye and then drying it until it burst open the shell to then boil it again and eat as a mush.  This process could take a whole day.

Recollections of Archibald McKellar,  a native of Scotland, who arrived in Aldborough in 1817 when he was not quite 2 years old and there was no mill in the community.  The first invention he recalls for preparing grain was a section of a tree 2.5 feet long and 12 inches in diameter with a hold the shape of a large half of an egg cut crosswise in the top.  The grain was put in the hole and with a wooden mallet the shape of the hole, the grain was pounded until the bran (outside covering) was removed.  The Scottish called this contraption the “Crotag” which means Pounder in English.  To eat this grain you boiled it well.

After this, Archibald’s father, Peter McKellar and Mr. Menzies (a stone mason) invented a hand mill in 1818 or 1819.  They called it a “Bradh” hand mill.  The shell is a section of hollow butterwood or sycamore about 3 feet long.  The lower stone is set into it and sunk about 2 inches below the top.  Near the bottom, where the meal comes out of the stone, a hole is made in the centre of the upper stone to drop the grain in by hand.  The upper end of the pole is place on the centre of the upper stone and lower end of the pole is placed at the rim of the upper stone forming the crank.  A stone mill such as this was sent for exhibit to the World’s Fair in 1886, held in the United Kingdom.

Colonel Thomas Talbot suggested Peter McKellar, who clearly had good mechanical talents, build a grist mill on the Sixteen Mile Creek in Aldborough (now Port Glasgow) and Talbot would give him the irons of his burned mill and an additional 50 acres of land.  The mill was built and in operation by 1821, but the 50 acres was never given.  McKellar sold the Mill in 1837 to a new owner.  Since the 16 mile creek would freeze in winter and dry up in summer, all the provisions required for summer eating had to be ground between mid-March and mid-June.  In order to accomplish this task, Peter McKellar ran the mill 24 hours a day by himself.  His work day began at 2am on Monday morning and he worked through until 1am Sunday morning.

To commemorate the burning of Talbot’s Mill and its reuse in Aldborough there is a cairn at the Memorial Park near Port Glasgow.  The cairn has a concrete base ten feet square and made of cobble stones taken from the Lake Erie shore were the first Aldborough settlers set foot.  The apex is 12 feet in height and has an iron flag staff on top.  The east side is covered with glass containing a list of pioneers as shown in the 1820 assessment roll.  On the west side is a panel with the names of Aldborough people who served in The Great War.  Jacob Smith of West Lorne built the cairn financed by the Aldborough Old Boys Association.  Unveiling took place on August 14, 1930.  In 2014 an interpretive panel was installed beside the cairn explaining the War of 1812 burning of Talbot’s Mill and the irons being moved to build the first mill in Aldborough.

The Daily Grind A grist mill was used to grind cereal grains of all types into flour or meal. As bread was served with most meals, settlers needed to have flour on a regular basis to survive. Colonel Thomas Talbot had a mill built near Port Talbot in 1806 to attract more settlers to the area. During the War of 1812, the settlement endured multiple raids in 1813 and 1814. Mills were set on fire all over Upper Canada to starve the population. Sadly, Talbot’s mill was burned. The Backhouse Mill near Long Point was spared and our settlers would walk 3 days there to have their grain ground and then return, walking another 3 days home. Those who could afford the expense, obtained flour in Buffalo, New York. Dunwich wouldn’t have another mill until 1821 when one was built in Tyrconnell. Aldborough settler Peter McKellar would use Talbot’s mill parts to build a new mill in 1821 on Sixteen Mile Creek. The mill stone can be seen today in Memorial Park, Port Glasgow. In the years between, settlers pounded grain in tree stumps, ground with a hand mill called a “Bradh” designed by Peter McKellar and John Menzies, or by any means necessar

Locations of Other Later Mills

We’ve been discussing Grist Mills essential to providing flour for baking, but the other type of mill that was popular are Stave and Saw Mills.  Lumber and stave industries were going strong in Aldborough by the 1880s.

Stave mills produced the narrow strips of wood that compose the sides of barrels.  They processed either hardwood—used to make “tight,” or waterproof, barrels —or softwood—used to make “slack” barrels, or those that were used for transporting dry goods and foodstuffs. Waugh Bros. Stave Mill was near West Lorne.  There was also McLaren and McArthur saw, stave and grist mill in Rodney, Ontario, 1887. The mill, located on Queen Street opposite Sandford Street, was established in 1879 by Galley and Sons. Circa 1884 Galley traded the mill to McLaren and McArthur in exchange for McLaren and McArthur’s mill at Old Rodney (Centreville). The mill was sold to John Bale in 1889 and destroyed by fire in 1897.   These must have been powered by steam as there isn’t a water source strong enough to power a mill.

The circular saw blade had been invented by the industrial revolution, and with the development of steam power in the 19th century, a mill could be located in more places. Scrap lumber from the mill provided a source of fuel for firing the boiler. The arrival of railroads meant that logs could be transported to mills rather than mills being built besides navigable waterways.

A sawmill’s basic operation is a log enters on one end and dimensional lumber exits on the other end.

Early sawmills were generally driven by a water wheel. The circular motion of the wheel made the saw blade move back-and-forth using a connecting rod known as a pitman arm.  Generally, only the saw was powered, and the logs had to be loaded and moved by hand. An early improvement was the development of a movable carriage, also water powered, to move the log steadily through the saw blade.

A small saw mill would be the center of many rural communities in wood-exporting regions such as Canada. The output of such mills would be quite low, perhaps only 500 boards per day. They would operate most during the winter, the peak logging season.  The arrival of a sawmill would stimulate growth in an early settler community.

Summary (acknowledgement, thanks, credit)
Thank you for listening to this week’s episode on the importance of Grist and Saw Mills to the Talbot Settlement.

Sneak Peak for Next Episode
Tune in next week to learn more about axes and other basic tools that were typically used around the farm.