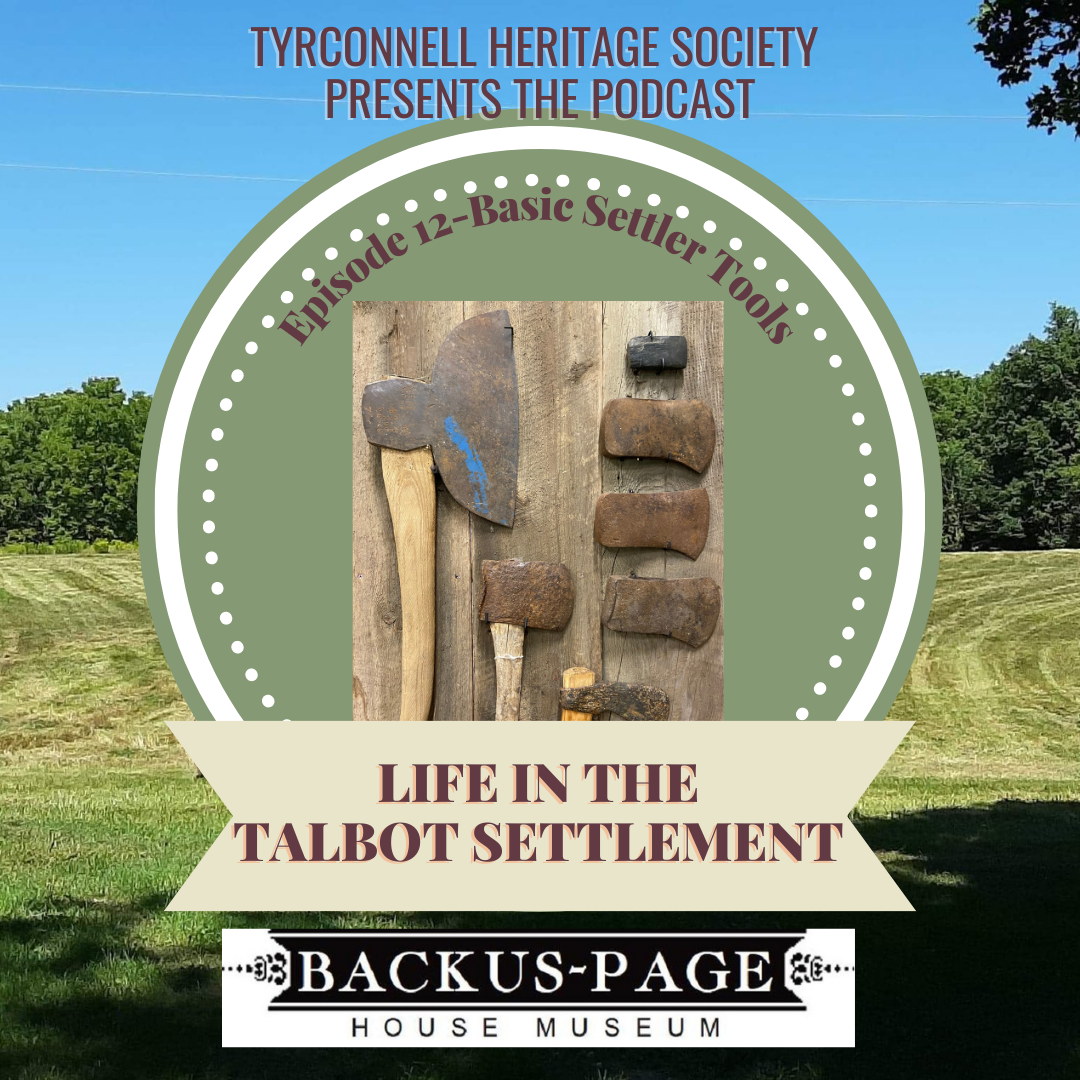 Potentially the most vital and multi use tool a settler would need was an axe. It had extensive everyday uses, ceremonial purposes and could be used as a weapon when needed. The axe was used to clear land, dig, fell trees, split wood etc. If it was all you had it did the work of a saw, adze, plough and more. Getting crops into the newly cleared fields was vital and timely. In the absence of other equipment, your axe was enough to dig the ground around the remaining tree stumps and plant a corn or potato crop. Trade axes are perhaps one of the most important and essential trade items produced. These axes were imported from European countries by the thousands, although many were made on site at trading posts and forts by blacksmiths.  Axe Head for these were hand-forged, made from a single piece of iron, heated and folded over a mandrel to make an “eye” or handle and forge welded together. Sometimes referred to as a “Lap-weld”. Early “eyes” were round holes. Later the eyes became tear-dropped or oval-shaped and later still rectangular. Handles or “helve’s” were made by the natives or white-traders. Many axe heads had maker’s marks or commonly referred to as “touch marks”. Touch marks were usually made with an iron “touching” the axe head when it was red hot, making a mark. Cast or factory-made axe heads with makers marks are often referred to as “guild marks”. The most commonly found style of axe heads are known as the “French” style, or “Biscay” style – since they were manufactured in the Biscay region of France. Axes were a very personal item, the handles were particularly customizable to fit the individual. Mostly carved out of wood, the curvature of the axe handle could be varied to reflect whether the owner was left or right-handed as well as reflect their arm length.

Upgrading from an axe to prepare their fields, farmers used a drag and harrow as well as hand rakes. Pulled by a single or pair of draft horses or oxen, the drag and harrow provided; weed control, seed coverage, broke up soil clumps, and levelled after ploughing. Pre-dating the more efficient disc harrow drag harrows were originally made of large tree limbs with no spikes. Colloquially known as a crude harrow, this model is described as rude to the ground by Thomas Macqueen in The pioneer farmer and backwoodsman, instead of breaking the soil through the efficiency of the tool it sought the same results with blunt force. When stumps remained in the fields this process was a challenge as the harrow would become stuck between stumps. This led to the creation of a triangle-shaped harrow with large 4-5 pound spikes attached the triangle frame was intentionally designed to easily overturn, dislodging itself from stumps and other obstructions in the field. This process was no easy feat and would require multiple passes to match the results of more efficient modern farming equipment, but until the stumps were removed ploughs or larger harrows couldn’t attempt to navigate the fields.

Until the mid 19th-century muskets were the primary gun used.  They were necessary for hunting, and also used for personal, livestock, and crop protection. This style of gun used Musket balls as ammunition and these could easily be made in the home with bars of lead purchased from general stores or tradesmen. The lead melts at a lower temperature than iron so when heated in an iron ladle it could be poured into a spherical mould to set. Packed in the barrel with small squares of linen and some blackpowder, muskets were fired via the “flint-lock system”. Early rifles used the same method with a few alterations. With a “rifled” barrel the rifle had better aim than its predecessor the Musket. It used bullets which had better aerodynamics than musket balls and there was no fouling of blackpowder in the barrel or pan of the gun.

Moving into the women’s realm of domesticity, she has some vital basics as well. Until cookstoves were widely available in the 1850s and settlers were established all hot meals were cooked in a single pot.  That is a lot of stew and pot roast. All households had a cast iron pot. Most had legs to stand above the coals and flames of the fire if they weren’t hanging over the fire by a pot extender, metal arm or tripod. The accompanying utensils, primarily spoons and ladles would have long handles to reduce the heat transfer up to the cooks hands. Even when made of wood, without the thermal conductive properties of metal spoons, long handles were still necessary to keep the cooks hands a safe distance from the heat and flames.

Having a needle, thread and thimble in one’s sewing kit was a staple for the everyday, and not just for mending clothes. Farm life does not come without its accidents and injuries, not then and not now.  A needle, when sterilized, doubled as a standard medical tool. Stitching sutures to close cuts and lacerations either at home or by a local doctor. Some of our local families such as the Storey, Patterson, Pearson and Backus families would have had their looms and spinning wheels with them. Homespun sheeps wool and linen made from flax, both materials produced on the farm were the primary sources used. However, the home production of woolens and especially homespun linen saw significant decline in upper canada during the mid 19th century. Tracked through the resource, ie. cotton, wool, linen, silk etc. Purchases and production of different fabrics were recorded in the census throughout the early 1800s. Textile purchases indicate women’s market participation and the shift away from self-sufficiency.

Join us next week to find out how the coming of the railroad in 1872 impacted the Talbot Settlement!