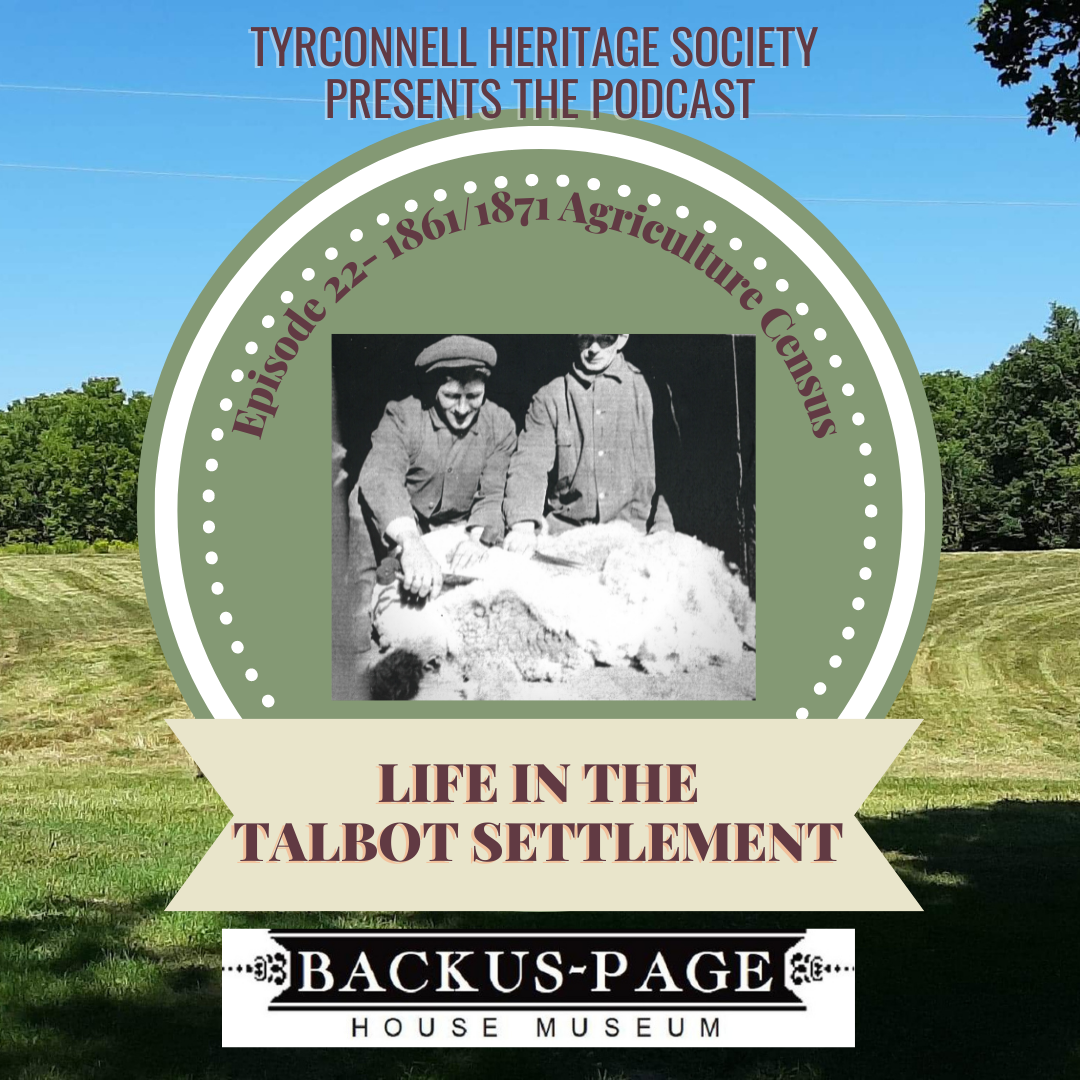 I thought it would be interesting to follow the Leslie Patterson family and the Andrew Backus family through the census records to watch a developing farm from the earliest records through to the 1871 census.

Information has been gathered about townships in Ontario since the early 1800s. Most of these records have had personal names extracted and indexed for genealogical research. However it seems that very little has been done on the agricultural side. For Dunwich there is some basic information from 1817, 1818 and 1819 regarding population, which went from 147 in 1817 to 288 in 1819. In 1829 there were 516 occupants and we get our first glimpse at the state of agriculture in the township. Thomas Talbot was the first settler and started clearing his property in 1803. By 1829, 2,642 acres had been cleared in the township. There were a total of 52 horses 3 years and older in the township along with 144 oxen, 231 milch (milk) cows and 209 horned cattle 2 to 4 years old.  Clearly oxen were most used for the challenging work of removing trees and stumps, clearing land and harvesting crops.

The first province wide census was held in 1842. About 120 heads of households are listed for Dunwich.  This census gave a more detailed look at what was happening in the township. These census records survive and we can see what each farmer was doing. The census gives total acres occupied by each family and the acres of improved land. There were 3172 acres of “improved” land in the township. The produce of crops was listed and the number of livestock. In addition, the number of hives of bees was listed along with the pounds of maple sugar produced. Finally the pounds of wool procured and the yards of cloth manufactured by each family were listed. Thomas Talbot had the most land cleared and livestock. However the Leslie Patterson household produced a total of 343 yards of cloth from their flock of 84 sheep.

Most families produced maple sugar, but only 11 had bee hives. John Wilson had 27 hives which was about ¼ of the hives in the township. Joshua and John Bobier had a total of 35 hives.

Their livestock consisted of 19 Neat Cattle (meaning oxen or heifers), 7 Horses, and 84 Sheep

The women of the family produced 30 yards of cotton linen or other thin cloth, 313 yards of flannel or other woollen cloth not fulled and 350lbs of wool.  Fulling is a process that increases the thickness and compactness of wool by subjecting it to moisture, heat, friction, and pressure until shrinkage of 10 to 25 percent is achieved

Andrew Backus on Concession 10, Lot 11 who inherited his land, some of which was already cultivated from his Grandmother Mary Storey

40 yards of flannel or other woollen cloth not fulled

Information from this census has been transcribed onto an Excel Spreadsheet for analysis by the West Elgin Genealogical & Historical Committee and staff at Backus-Page House Museum.

There was a census taken again in 1851, but the detailed records for Dunwich have been lost. There were a total of 264 “occupiers of land”. Cultivated land was 9903 acres with 6369 acres of crops, 3354 acres of pasture and 180 acres of gardens. We can only get totals for crops, livestock and some produce. In this census some additional information was gathered. In 1842 only improved land area was given. In 1851 this was subdivided into “under crops”, “under pasture” and “gardens”. Turnips, clover, carrots, mangel wertzel (a type of beet), beans, hops, flax, hay and tobacco were added crops. Have you listened to Episode 20 on the Tobacco Industry yet?  Acreage of crops and bushels of production were given.  Production of cider, butter, cheese, beef and pork was also included. Cattle were subdivided into milch cows, calves or heifers and bulls, oxen or steers. Beehives were not included in this census.

In 1861 another census was taken. Fortunately all the records for this census have been microfilmed and are available online through Library and Archives Canada. These census records provide us with the name of occupier and the concession and lot held by each person or family. The land is broken down into “under cultivation”, “under crops in 1860”, “under pasture in 1860”, “under orchards or gardens”, and “under wood or wild”. The cash value of the farm in dollars and the cash value of farming implements or machinery is also given for each farm. Acres and production for fall wheat, spring wheat, barley, rye, peas, oats, buckwheat, Indian corn, potatoes, turnips, and mangel wurtzel are provided. Production of carrots, beans, hops, hay, clover seed and flax or hemp is included. Other products included wool, maple sugar, cider, fulled cloth (is a step in woollen clothmaking which involves the cleansing of cloth (particularly wool) to eliminate oils, dirt, and other impurities, and to make it thicker), linen, flannel, butter, cheese, beef and pork. Produce of orchards and gardens was given in dollars.  Livestock covered bulls or oxen over 3 years of age, milch cows, horses over 3 years of age (with value), colts or fillies under 3 years of age, sheep, pigs, and total value of livestock.

An interesting addition was a category for “pleasure carriages kept” and their value. Meredith Conn had a carriage valued at $200. As a comparison, the cash value of 50 acres of woods was $400. The Leslie Patterson farm produced 3000 pounds of cheese in 1860, the largest producer by far in the township.

Eighteen years later Leslie has died so Mrs. Lydia Patterson is listed as head of the household.  Leslie dies in 1852.  Lydia has 5 daughters and a granddaughter living with her plus one Walter Patterson age 13 listed as a labourer (unsure of relation), Daniel Hooley listed as a labourer age 16 and Archibald Duncan a teacher of music who seems to be visiting the Patterson family or someone nearby during the census and his regular residence is listed as not known.  Two years later Archibald marries youngest daughter Lydia and takes over the farm.

$40 value of produce from the orchards and gardens

Produce of Orchards and Gardens $20 value

Information on this census has been transcribed onto an Excel spreadsheet for further analysis by the committee and museum staff.

The 1871 census is the last one for which records on individual farms exist.  The format for this census differed in that there were a number of schedules used to collect information. Schedule 1 is the Nominal Return of the Living and contains mostly personal information. Schedule 3 is the Return of Public Institutions, Real Estate, Vehicle and Implements. It provides the number of acres owned and the number of barns and stables. There is also a list of carriages, boats, ploughs and cultivators, horse rakes, threshing machines and fanning mills. Schedule 4 is the Return of Cultivated Land, of Field Products and of Plants and Fruits. This is similar to the previous agricultural censuses. Schedule 5 covers Livestock, Animal Products, homemade Fabric and Furs and includes butter and cheese production,  and hives of bees. Schedule 7 is the Return of Products of the Forest.

One of the challenges in extracting information from this census for individual farms is that the occupant names are only provided on Schedule 1. All other schedules reference a line page and line number from Schedule 1 so an index will need to be provided. Information on this census is being transcribed onto an Excel spreadsheet by Colin McGugan as this project in ongoing.

For the 1881 and later censuses, when records were microfilmed in 1955 the originals were destroyed. Unfortunately only Schedule 1 was filmed and so the records of agricultural production on individual farms has been lost.

From this information you can figure out the yield per acres of each crop for that year.  How many milk cows it takes to produce a certain amount of butter or cheese and more.  I hope this has peaked your interest in looking at the Census records yourself, especially the schedules pertaining to farming.

Join us next week for Episode 23 which can be used as an audio guide to tour some of our local cemeteries.