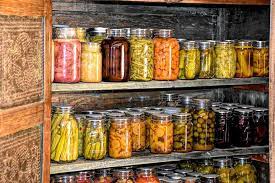 This week is Ontario Local Food Week! In celebration of this week, we’re going to be talking about the way our settlers stored their food!

Before the invention of the refrigerator, settlers especially in the rural areas used what is called a root cellar. A root cellar is a structure, usually underground or partially underground, used for storage of vegetables, fruits, nuts, or other foods. Early root cellars, sometimes called “larders”, were constructed under the house, near the house or into a hillside.

Perishables such as fruits and vegetable, would be kept cool to be eaten after the growing season. Winters in Ontario were too severe to leave fruits and vegetables outdoors and settlers were advised to excavate a small cellar with a trapdoor in the floor.

This would be large enough to hold twenty or thirty bushels of potatoes and a barrel or two of pork and be accessible for provisions to be used in the preparation area of the kitchen. Depth and shape of the pit, and items stored varied depending on the owner and their crops. Most pits were square or rectangular with plain dirt walls and hard packed floors. Sometimes wood lined the walls and shelves were built as needed.

Some barns also had pits dug underneath floors to keep dairy products cool and store root crops for animal fodder. Fruits like apples would be placed in a box or barrel with straw, saw dust, or leaves surrounding each piece. This prevented spoilage as the high level of carbon dioxide inhibits ripening and the lower oxygen level discourages bacteria and mold.

Backus-Page House Museum is built on a sand knoll and food may also have been buried in sand in the cellar instead of boxes or barrels. Yeast would be stored in wood or earthen containers. Preserves in glass or China. Butter needs to be kept cool and cheese needs air to circulate around it so wooden shelves were necessary. Parsnips are best covered in sand excluding all air. Cabbages and potatoes hold up well in cellars and would be packed in barrels or boxes with outside leaves still attached. Often damp moss would be wrapped around the vegetables for even better storage.

If you’ve made it to the end of this post, thank you for reading! We hope everyone has a great Ontario Local Food Week! We leave you off with a question- how did your parents or grandparents store their food? Let us know in the comments!