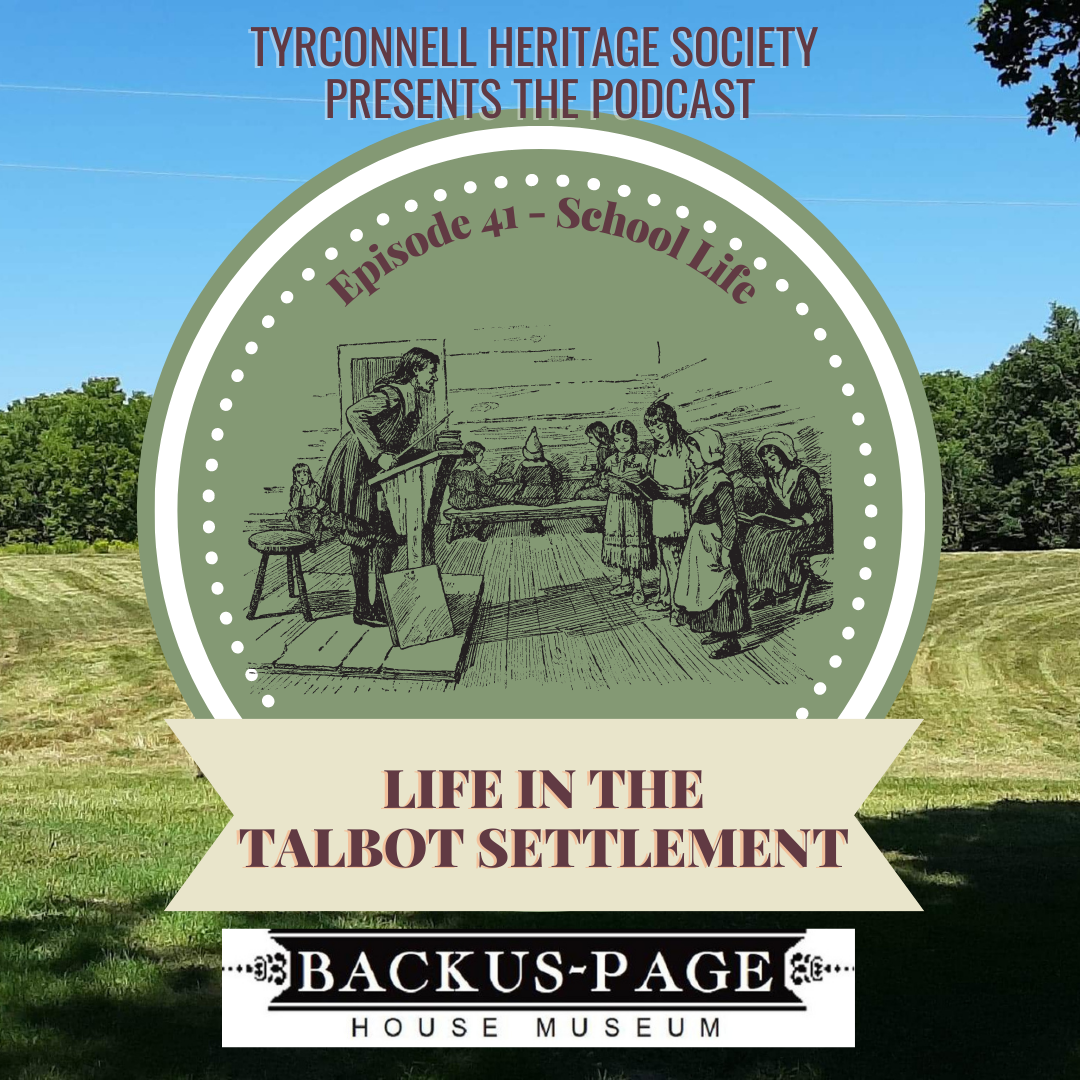 Did you know, back in the 17 and 1800s, school attendance was not mandatory? The good old days, eh? It wouldn’t be until 1891 that children between the ages of 8 to 14 had to attend school. If they didn’t, they would have had to pay a fine.

Now let’s get into the semantics of early schools. To actually have a school you would need to have at least 20 students, now that may seem like a tall order until you take into consideration that most families were much larger back than then they are now. Andrew and Mary Jane Backus had a mere 12 children, that’s more than half the school already!

Now you might be thinking that schools back then had the same kind of fun and quirky names that we give them now: Medway High School, Parkside Collegiate Institute, Dutton-Dunwich Public School. But alas, the schools were named in School Sections (S.S) and this was combined with a number. S.S #1 was Port Talbot, it was number one because it was the best school in the area. Just kidding, it was just the first school in the area, as this was the first area that was settled in the western part of Elgin County. When Colonel Talbot arrived back in May 1803, the settlers quickly realized that if they wanted their children to thrive in this new settlement, they would need to educate their children. As such, the first school was started in a log building, this was owned by Thomas Gardiner. This is because, before the community would build a regular schoolhouse, they would hold school in family homes. This was for two reasons. First, building a schoolhouse would be one of the last things that settlers had time to do – they needed to build their own homes, barns, and farm their land. So it wouldn’t be until much later that the settlers would have the time to spend on building a schoolhouse. Secondly, school would have been taught by someone’s parents. They would not have had a schoolteacher in the early days of the settlement.  , so it makes sense that the settlers would have had

So, what was a typical day in a school? Well, the teacher would ring the bell to start the day. Once all the students had filed inside and were ready to start, they would recite the Lord’s Prayer, have a Bible Reading and then they would have roll call. Fun fact, if you were not present during roll call you would have had to wait outside until recess. Personally, I would have waited outside just to have a long recess. The first classes of the day were usually reading and writing. Each grade would take turns reading out loud to the teacher while the other students would do their written work. Next would be recess, students would have the opportunity to eat some food, and get rid of some of their energy after having to sit still and be quiet all morning. After recess, they would usually practice their math/arithmetic. At the end of the day: the teacher would end the day with announcements. The duties for the next day were handed out and children who misbehaved were kept late. The rest of the students would be free to leave for the day.

Now to be a teacher back in the day you didn’t have to have a degree. But you dedicated your whole life to teaching. Want to know the rules for teachers? They’re a doozy, here is the list, let me know what your favourite rule is in the comments below:

Now what do you think of those rules. The best rules are of course that male teachers can take two evenings a week for courting. Forget lesson planning, he’s got a woman to woe. Being a teacher impacted every aspect of life as you can no doubt tell by the fact that there’s a rule that a teacher should lay aside a goodly sum of his earnings – it’s giving financial literacy (sparkle emoji).

In all seriousness, much of a teacher’s job was less about teaching the children and more about being a good Christian and keep the schoolhouse clean and ready. Now we have janitors to help keep the school clean and organized, but they couldn’t afford that luxury in those days. Most teachers in the period would have been men. This is because only men were entitled enough

Now you might be thinking, teachers had it rough, but let me tell you about the rules for students.

When students responded to a teacher’s question, they would have to stand. When they spoke to the teacher they would have had to say yes/no ma’am or sir. It was a very formal environment, especially compared to the schools that we have nowadays.

Once they finally had the time and resources to build a schoolhouse, they would have a community gathering to set it up. Schoolhouses were typically one big room. Because light sources would have been lanterns and windows – the walls would have been lined with windows. On walls without windows there would be hooks where students could hang their coats. At the back of the room would be the woodstove that would heat the building. The oldest students, usually boys (unless they were all working in the fields) would be in charge of bringing wood in and keeping the fire running. There would be two rows of benches that would have a walkway down the middle. Most schoolhouses would start with benches, and eventually start to have desks. They could do this because the students would have used slates. Slates are a piece of wood, with a piece of black slate on top of it. This means that it was fairly easy to balance it on your lap to do your work, negating the necessity of a desk. Paper in this time period was expensive and hard to get. So the idea of students wasting it in school practicing their alphabet, was simply not possible. All the students would have been in the same room, regardless of their age or what grade they were in. The teacher would have been in charge of all of the students at the same time. They would have had to be very good at juggling tasks and keeping students on task!

The main subjects that children would learn in school were reading, writing and arithmetic. These were called the “three r’s”. You can tell school back in the day was really good, because they thought that reading, writing, and arithmetic all started with the letter r (someone needs to go back to school). Usually there was also a fourth r – Religion. This was because the vast majority of settlers were religious and the only book that a lot of the settlers would have had is the Bible. Talbot Settlement teachers would focus on these four subjects because they did not have enough time to teach any more than this. So how did they learn? Well memorizing and reciting were the most common ways to learn and teach. Because books and paper were expensive, students did most of their learning by rote. Rote means memorization – they would have had to memorize poems, Bible verses, and then recite them to their teacher. Math was taught by drill – children would learn to add, subtract, multiply and divide problems in their head. This means that all the timetables were “drilled” (pardon the pun) in their heads and students would be able to do the math quickly in their head.

Eventually, globes would be invented, and teachers would start to introduce geography and history – though this usually would have been British history – I wonder how the American immigrants felt about that one.

Now a days students like to go to the washroom to get out of class for a while, and in all likelihood students in the past would have done the same thing. Especially when you consider that the bathroom was an outhouse all the way outside of the school. Nothing like a little sunshine and a walk to avoid having to memorize another Bible verse.

Often schools would also have a woodshed, where they would store the wood for the woodstove, and some kind of stable or barn. Most students would have walked to school but depending on how far away the school was from their homes, some students would have had to ride a horse to school. The good news is, if you were late for roll call in the winter, you could always hang out in the barn or woodshed, or worse case – the outhouse.

So, what happened when kids misbehaved in school? There were several different kinds of punishments. Usually, it depended on what they had done. For example, if you did not recite well during the lesson, you would have to wear the dunce cap. If you were late, you did not get to have recess. If you misbehaved you would either have to stand with your nose pressed into a circle that had been drawn on the blackboard, or you would have to write the sentence “I will not….” 100 times over. Sometimes, depending on who your teacher was and how badly you had misbehaved you would receive corporal punishment. Usually, corporal punishment was some kind of lashing – either with a branch, a leather strap, or a ruler. Often the lashing would have been on the students’ hands. Imagine having to go home to ma and pa, and explaining that you couldn’t milk the cows because you had a bunch of bloody welts on your hands. Pa might add one or two after that. This meant that they would go home and have to milk the cows, farm and more, with painful welts on their hands. A punishment best avoided I would say.

What do you think? now that you know all about life in a one-room schoolhouse in the 1800s, would you go back in time . This podcast was written and researched by staff member Michelle Kuivenhoven, thank you.

Thanks for listening to this week’s episode, we hope you enjoyed it. Catch us in two weeks for another great episode.