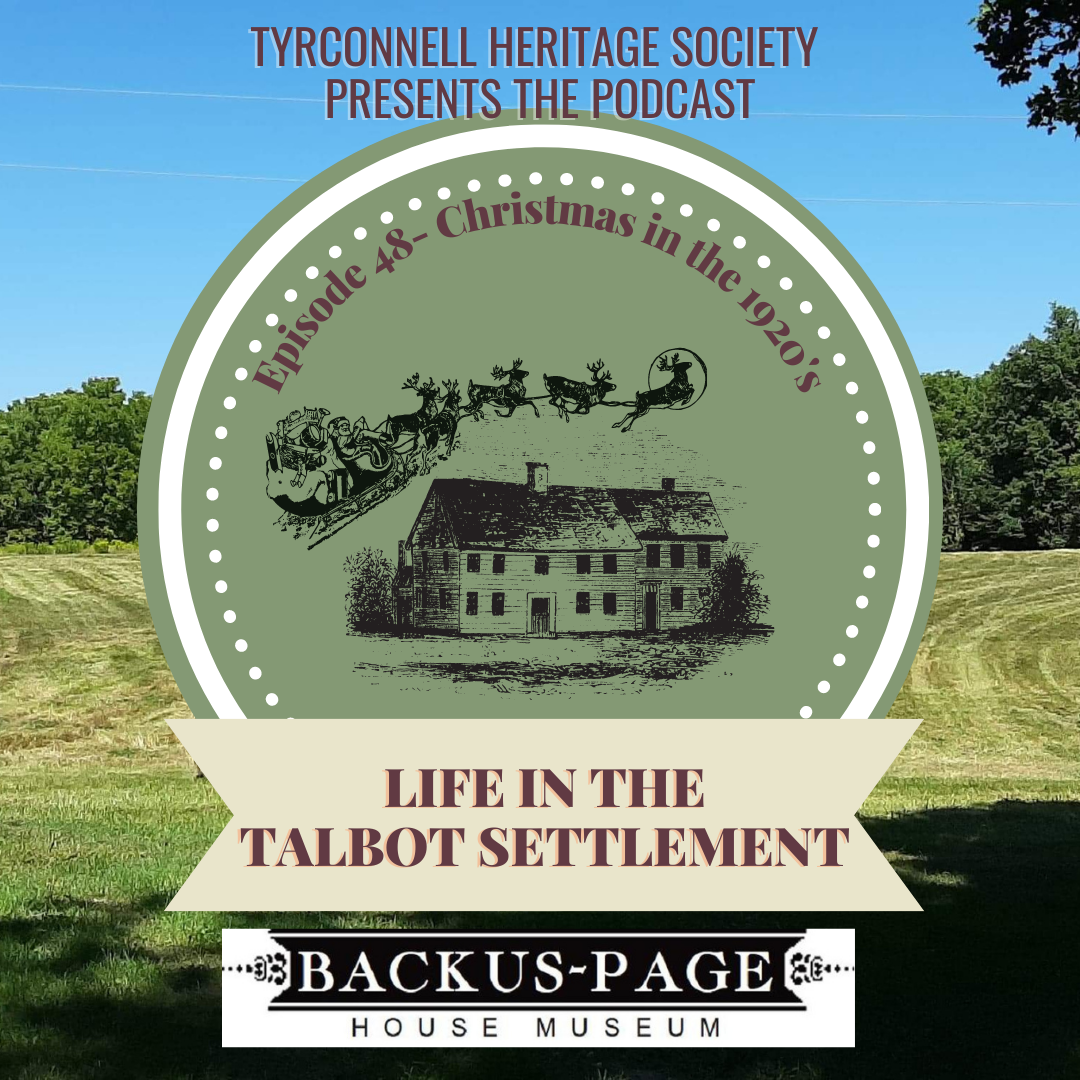 It’s that wonderful time of year again, where we spread the historic Christmas cheer! It’s our Roaring Twenties Christmas episode.

While we are largely going to focus on the 1920s for this episode, we are going to start in 1916, with 12-year-old Frances Mae Throthen as she writes a Christmas card for her family, likely her older sister and family. Let’s see what she had to say to them:

Jim has been sent to Dutton. He is just coming home. He will have some hard tack candy and a pound of cranberries. I don’t like cranberries, but the grown ups do. Dad and Mr. Page butchered a pig the first of the week and we are having fried potatoes, head cheese and chili sauce for supper. I love head cheese, but I crawled under the spare bed when they killed the pig. It is very fascinating though, to see the pig strung up with two sticks keeping his belly apart.

To-morrow night is the Christmas concert. Uncle Joe is going to drive the bobsleigh; he will have his mustache all stiff with butter. I hope I get something nice off the tree. Anyway, I’ll get a box of candy and a book for saying Bible verses. I’m in the dance. I’m in a dialogue too, for McMullen and Ernie Braddon are going to pull the curtains. Ez will be wearing his astrakhan hat and have his mustache trimmed, maybe he will give me some gum.

The church Christmas tree will smell as only a tree at Tyrconnell Church could smell, so fresh and sprucey.

This Christmas and the two before would have been overshadowed by the First World War. It created its own Christmas pastimes, like making gift boxes for the men on the front lines. In 1915, the women of Elgin County sent roughly $1300 worth of Christmas gifts to the front lines. This included 129 ib. of fruit cake, 257 ib. of candy, 47 boxes of chocolate duds, 323 pints of jam, 553 pairs of homemade socks, 1100 kid-knitted wash cloths, 234 quilted mattress covers, and $501.38 of money donations. Fresh socks were in such a high demand that Mrs. Scarrow, one of the organizers, created and distributed two runs across the county of a guide to knitting perfect socks. These care boxes were very well received, and many of the men wrote back heartfelt thanks, which later found their way into newspapers.

Also reaching the papers in Elgin County was a message from a locally native teacher temporarily in England. She had the opportunity to visit the war graves on “the continent,” and wrote the Rodney Merchant to reassure everyone that their dead were being well tended.

In the 1920s, Canada was not only still recovering from the war, but, like us today, coming out of a pandemic commonly called the Spanish Flu. As the first years without a looming international disaster and a booming economy, everyone found themselves in need of the spirit and with money to spend on Christmas food, decorations, gifts, and cards. For stores everywhere, it was an advertising opportunity, and there was an increase in Christmas themed advertising, especially with Santa Claus as the mascot.

Before we talk about the gift receiving, let’s talk about the giving that our communities still put first. Women’s Institute Christmas efforts did not stop after war ended. Christmas dinners were put on by Women’s Institutes and fundraising events continued but focuses would go to organizations at home. The Women’s Institute in 1921 sent gift boxes like what went to the soldiers to the Byron Sanitarium. Similar organizations also planned festivities in hospitals for veterans and the public, raised money for the Sick Children hospital in Toronto, and donated to war orphans overseas. The recently appointed Great War Veterans Association also fundraised in support of Canadian children whose fathers were lost in the war.

That’s how they shared the Christmas spirit on a grand scale. Now, how did they foster it at home?

A big part of Christmas was the Christmas meal. Turkey, chicken, pork, and ham were popular meats, and rural families, like Frances’s, would still raise and kill their own animals. They would also provide a lot of cities with Christmas fowl, selling them at the train station and getting extra money for other parts of the holiday. One Miss Bessie Smith sold her turkeys for $720. Today, that’s roughly $10 000!

It was also a time to step away from commonplace dishes, as we did at our Museum Christmas Dinners. An interesting meal could include (as ours did) Lobster Bisque, Duchess Potatoes, Carrot Cream, and Pineapple Upside-Down Cupcakes. Train travel and preservative methods were at a point by now that seafood like lobster could be brought inland, and every small convenience tool that came out to reduce work made more complicated ventures like Duchess potatoes and Pineapple upside-down cupcakes a possibility.

But watch out! Housewives had to be careful in the holiday hustle and bustle, to make sure things were still fresh enough and everything cooked through. Christmas indigestion was a common occurrence!

In the realm of decorations, this was an early age for fake trees! Green-painted feathers would be shaped into pine boughs and attached to a wooden frame. Gifts were hung on or around the tree, depending on what it could hold. Community tree celebrations were had in several towns and met great success, like today’s Lighting of the Lights celebrations. Electric lights were making an appearance; however, they were most common for rich homes and in stores to draw people to their windows. Electric lights would not become widespread until the 30s. Instead, people decorated their windows with pots of late-blooming flowers. White hyacinths and narcissus, calla lilies, Christmas cactus, cyclamen, primulas, begonias, and late-flowering chrysanthemums were a few of the flowers that could be planted in late fall and bloom around the holidays.

Gifts for the family were also beginning to stray from utilitarian things to more personal entertainment, although many folks still encouraged giving children “gifts that would last”. Clothes, pieces for the home, and farm tools were still popular, but these included more dress clothes and accessories, fancier dining wear or a full smoking kit (matching trays and ash receivers), ivory, and decorative furniture. The farm tools saw the most dramatic change, as they moved from animal and manpower to machines, crank corn shellers and tractors. Early model washing machines, like the ones on display in our Agricultural Center, were also popular. Those with greater means and aspirations asked for telephone lines, electric lights, a motor car, or movie tickets. Children and youth might ask for a radio, model train, or Kodak camera, alongside Frances’ candy, books, and gum. For more distant relatives, a decorated basket of cranberries was a nice craft to give. Interestingly, there was a report that many of the imported toys in 1920 were German. Extended Christmas hours were also common, and businesses would stay open longer the week before Christmas, although they all closed for the actual holidays.

The advances of technology and rapid change of toys on market led to some comedic miscommunications between children and parents. Here’s a skit from the Rodney Merchant:

Approaching the counter of a store, Mrs. Newrich said to the clerk, “My little boy was disappointed in not getting a magnet among his Christmas presents. Have you any?”

The clerk pulled something from behind the till. “Here’s one at fifty cents.”

Mrs. Newrich looked at the little piece of metal and haughtily said, “We don’t have to buy such cheap-looking steel things. Show me something in silver.”

Speaking of cameras, we’ve all had to pose for Christmas photos, haven’t we? Or perhaps you’ve received someone else’s photos in a Christmas card? This was the age where those photo shoots started becoming popular! While they would not have gone into the cards just yet, cards were also a big part of the Christmas tradition. Whether they were homemade or pre-ordered, it was expected that everyone would give and receive Christmas cards.

Outside of the Christmas objects, it was also a season of entertainment! Churches and schools would put on Christmas concerts like the one Frances was in between December 21st and 23rd, leaving the 24th and 25th for religious ceremonies and personal family gatherings. Christmas concerts had a lot of time and heart put into them. They included skits, songs, dances, organists, orchestras, and sometimes awards for community members. The community Christmas trees could be brought into these events, and it was always a hit when Santa Claus arrived. In the Payne Mills School, these concerts were so important that preparation would start right after Easter!

Open air skating was another popular pastime once the ponds were deemed safe enough. Different organizations like the YMCA put on dinners for returned soldiers, and people would also visit family and friends. It was common practice to announce in the paper if you were spending Christmas at someone else’s house, to keep everyone in the loop. It would be disappointing to miss a notice and try to surprise visit an empty house!

For big international news, England swore in its first female barrister, Helena Normanton, just before Christmas! She was a well-spoken feminist who set an example of her values, fighting to keep her ‘maiden name’ once married and standing in court.

The newspapers also liked to keep up with the crown family! King George, Queen Mary, and Princess Mary spent their Christmases in Sandringham. In 1920 they were also visited by the royals from Norway; King Haakon VII, Queen Maud, and Prince Olav.

That concludes our Christmas podcast! Merry Christmas, happy holidays, and seasons greetings from us to you! Thank you for listening!