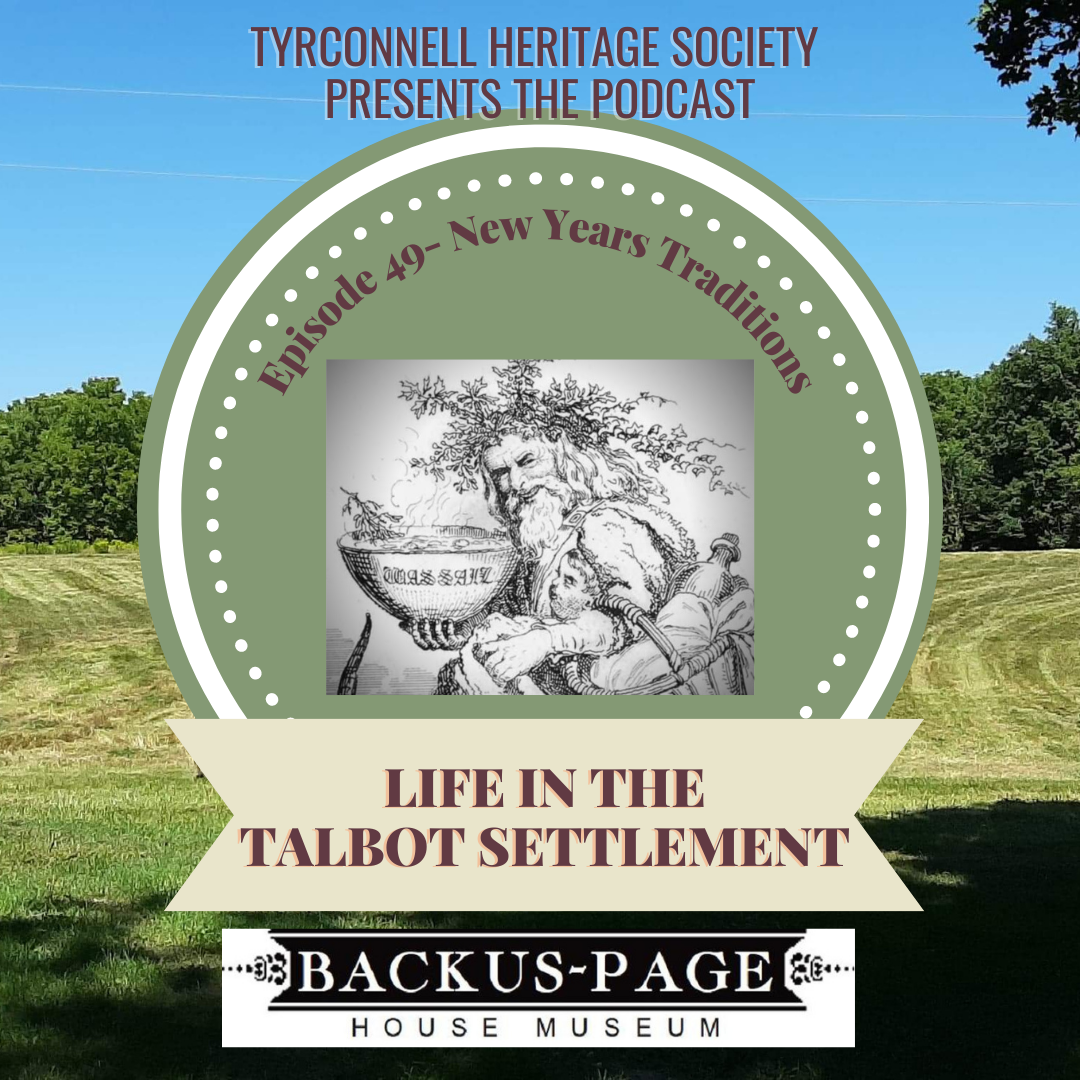 In the 21st century, most people gather around New Year’s Eve to have a party, perhaps drink a little, and watch their region’s ball drop at midnight marking the start of the new year. But what other traditions are there? What would the settlers of Upper Canada have done to celebrate the coming year? Today I’ll be talking about the history of wassailing and mummering, both customs that originated in Europe that made their way over to Upper Canada.

Wassailing is an ancient tradition that stems from pagan times. The Anglo-Saxon tradition dictated that at the beginning of each year, the lord of the manor would greet the crowds with the toast “waes hael” which means “be well” or “be in good health”. The followers would then reply to the lord, “drink hael” translating to “drink well”, and so the New Year celebration would commence, and drinks would be shared. The saying “waes hael” later turned into what we call wassail and adaptations of the tradition formed, centered around singing and drinking. Before the Gregorian Calendar messed things up in 1752, the traditional date of wassailing was the 17th of January. Now the custom commonly takes place on January 5th, also known as the Twelfth Night.

There are two forms of wassailing, house wassailing and orchard wassailing. The former involves groups of revelers, often farmers, farm workers and villagers marching from one orchard to the next, creating a noisy procession as they bang pots and pans, sing, shout, and fire shotguns. This process was to waken the sleeping tree spirits and ward off any evil lurking in the branches. The wassailers would gather around the biggest trees and place wassail-soaked toast into its branches accompanied by a song. The purpose of this practice was to give gifts to the tree spirits to ensure a bountiful crop. This custom is still practiced today and is particularly popular in the cider producing areas of England as well as the east coast of Canada.

The second form is house wassailing in which merrymakers go house to house singing songs, carrying a wassail bowl, and spreading good wishes. In the Middle Ages, villagers would approach the lord of the manor and ask for money and food in exchange for blessings and song. If the lord felt charitable, he would demonstrate goodwill to those who served him. The wassailing bowl was a wooden bowl or cup originally made of Lignum Vitae, one of the hardest commercial woods of England in the 17th century. This type of wood was perfect for holding hot liquids. However, the bowl was also commonly ceramic and fitted with many handles surrounding the vessel. The wassail drink itself generally consisted of warmed ale, wine or cider blended with spices, honey, apples and perhaps eggs. The drink was frequently referred to as “lamb’s wool” because the top froth-like layer from the apples resembled wool.

The poem Winter by William Shakespeare describes the sound of crab apples being thrown in the hot wassail drink.

When icicles hang by the wall,
And Dick the shepherd blows his nail,
And Tom bears logs into the hall,
And milk comes frozen home in pail,
When blood is nipp’d and ways be foul,
Then nightly sings the staring owl,
Tu-whit;
Tu-who, a merry note,
While greasy Joan doth keel the pot.

When all aloud the wind doth blow,
And coughing drowns the parson’s saw,
And birds sit brooding in the snow,
And Marion’s nose looks red and raw,
When roasted crabs hiss in the bowl,
Then nightly sings the staring owl,
Tu-whit;
Tu-who, a merry note,
While greasy Joan doth keel the pot

The drink was served from the bowl and passed around from one person to the next. Over time this tradition morphed into what we know as caroling. Some traditional carols like “We Wish You a Merry Christmas” are based off wassailing. For instance, take the lines “Now give us some figgy pudding” and “we won’t go until we’ve got some” refers to wassailers begging for food.

Mari Lwyd is another traditional folk adaptation of the house wassailing custom. This version was largely practiced in Wales during the Victorian era. There has been much speculation surrounding how the name Mari Lwyd came about, though is thought to be influenced by Celtic and British mythology. So, what is Mari Lwyd? Well, Mari Lwyd is a horse’s skull with lights as eyes, attached to a pole. The mane is made of colourful streamers, ivy or holly, and a white cloak is fixed to hide the person who controls the character underneath. The character of Mari is one of mischief, often stealing objects and chasing people about. The makeshift horse is accompanied by villagers, an Oster, a Lady, and a jester. Once Mari and the party have reached a house, they sing Welsh songs, wassails, and more traditionally, a ritual called pwnco. This ritual involves an exchange of rude rhymes with the person who answers the door. If entry is granted into the house, it is believed that good luck will come in the new year upon those who let Mari in.

The first written record of Mari Lwyd was in 1800 in the book A Tour Through Part of North Wales by J. Evans. The origins are unknown, but the custom resembles many other hooded animal traditions of Britain. For example, The Old Tup in Derbyshire involved a group of poor people disguised in a makeshift horse costume. The villagers would go door to door trying to find food and money in the harsh depths of the winter. Mari Lwyd almost ended in the 19th century after the custom faced criticism from Welsh Methodists and Christian non-conformists. Thankfully, practices remained alive, and Mari is still seen at night in cold wintery villages of Wales.

The next pre-Christian tradition we’ll be talking about is mummering. Mummering is very similar to wassailing in the respect that it involves dressed-up villagers going door-to-door singing. The custom is believed to date back to Roman times when dressing up for parties became widely popular. Originally mummering involved men and women swapping clothing and putting on masks. After which, mummers would go door to door singing, dancing and asking for food and drink in song. During the time of King Henry the 8th, mummering shifted from jovial recreation to a means for deceitful begging and crime committing. King Henry enforced a law prohibiting mummers from wearing masks. Those who disobeyed faced 3 months in jail.

Practices of mummering varied depending on the region and time period. In regions like Durham, Yorkshire, and Devon, a sword dance was incorporated into the mummering custom. Not only did the practices and rituals of mummering vary depending on region, but the name did too. In Scotland it is known as “guising”, “corning” in Kent, and “mumping” in Warwickshire.  Today, mummering is still practiced in parts of the UK and the east coast of Canada, though the traditions have been altered. In Newfoundland, people are outfitted with their undergarments over top of their outerwear and homemade masks used to disguise their identity. Once dressed, mummers go to their neighbour’s doors unannounced and ask, “Any mummers “lowed in?”. A fun game is made from guessing the identity of those dressed up and shortly after dancing and drinking commence.

Another adaptation of mummering Newfoundlanders have created is an “ugly stick”. These sticks are essentially a pole with bottle caps attached to create a jingling sound, a rubber boot nailed to the bottom, and a tin can with a mop to represent a face. Ugly sticks are widely used by mummers to create music while dancing, however it is not required to participate in mummering, rather a fun little extra. This version of mummering has been practiced in Newfoundland for around 200 years. Today, mummering is banned in some regions of the world because it is seen as begging. However, modern house wassailing is essentially begging as well, just without disguise.

Next time you sing Christmas Carols pay attention to the lyrics and you just might find some parallels to the traditions of wassailing and mummering. Thank you for listening to this week’s episode on traditional New Year’s customs. We wish everyone waes hael in the New Year!